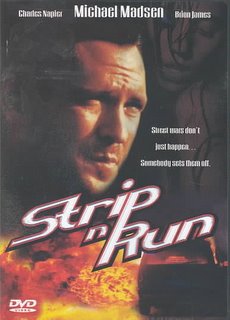 Chalk up another mediocre Madsen flick. Madsen plays a gangster named Jimmie D who is the voice of reason for the other characters. To get straight to the point: The movie looks cheap, and the editing is jumpy. Madsen doesn't really do anything at all. He looks sleepy. The funniest part of the movie is the appearance of Todd Bridges as a hoodlum. He shoots people and goes way over the top. His death scene is pretty hokey. He just covers his chest after a poorly mixed gunshot noise.

In conclusion: The movie has the sleazy moments you want (stripper nudity) and that's it.