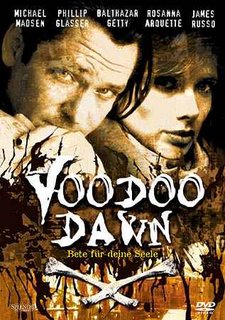 
Voodoo Dawn is a not-too-thrilling thriller. Michael Madsen stars as Frank, who is let out of prison after a curse is set upon him. He wants to reclaim his status as a bar owner. But the voodoo curse won't let him... As you can see, the plot is minimal, and as the movie progresses, it gets even smaller.

Madsen and Arquette try, but can't get anything out of this except a paycheck. James Russo plays a washed up hick. If that is the character or him in real life, I couldn't tell. Madsen has been in better Direct-to-Video productions like Supreme Sanction (1999), or Executive Target (1997). Rosanna Arquette is one of the better Arquettes, but she needs to pick out better material. I like all the actors involved, But I wish they will put their efforts into something more worthwhile next time.

Yup, seems like this film is confusing and not worth a dime at best despite the actors trying as you claim. I sort of enjoyed the 1991 zombie film of the same name due to it having Tony Todd, a young Gina Gershon, unusual atmosphere & catchy OST.

This is a tough sit. Don't remember much from this one. Michael Madsen phoned this one in.