Shootfighter II is just as good as the first one.

Shingo and the gang are back for more of the World’s Deadliest Sport (Which is Shootfighting, duh).

When the movie opens, we see some familiar pants. You’ve heard of “Blockbuster Pants”, now there are Shootfighting pants. As you remember from the first movie, they are black sweatpants with big pink patches.
The man wearing the pants is running from the new shootfighting ringleader in Florida, Lance. He is an ambitious and deadly man.

Cut to a James Brolin doppelganger, a cop named Rawlins (Randolf) asking the question “Do you know anything about a shootfighting ring in Miami?” to Nick, Ruben and Shingo. Rawlins wants to go undercover and bust the new shootfighting ring because his son died in it. Rawlins also recruits a dock workin’ badass named Shark (Clark) who resembles a lost Swayze brother. An uneasy alliance is forged between Nick, Ruben, and Shark.

Nowhere is this tension better exemplified than in the scene where Ruben notices Shark’s tattoo. Ruben glibly notes that it looks "Like a tuna fish to me." Whereupon Shark delivers the immortal line (groan) “It’s a shark, buttwipe” (groan again). Also groan-worthy is Shark inexplicably nicknaming Ruben “Waterboy” for the rest of the movie.

The new gang enters Lance’s strongman competition where it eventually leads to an underground shootfighting match. They fight baddies such as a black guy who looks like “Dee Jay” from the then-current game “Street Fighter II”, a guy who eats raw meat, and Sargon, Anatoli, Khan, and Grunner. 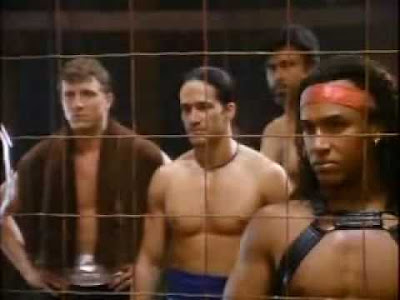 The audience for “The best entertainment on the planet!” consists of 7 or 8 bloodthirsty rowdy jackasses, one of whom closely resembles Singer-Songwriter-Pianist Randy Newman. Who knew?

There is a subplot involving Ruben and some British waitress who works for Lance. She has a very nice apartment for a single woman on a shootfighting waitress salary. They go to a party where one song continuously plays: “Take me to your house”, and we debated whether the lyrics were "Take me to your high house" or "take me to your high horse". Only the viewer can decide...either way it is catchy!

In the end, Lance kidnaps Shingo, a terrible secret is revealed and Rawlins joins the fray in the shootfighteriffic climax. Will Lance make his casino? Will his assistant “Joseph Stalin” get his comeuppance? Will Shingo fight?

Find out the answers to these questions and much, much, MUCH more in this rousing sequel where the action is as bone-crunching as the dialogue is flat. It caps off with an awesome freeze frame and thus concludes this Bolotastic sequel for the ages!

Shootfighter II is almost as good as the original - that's a major accomplishment for a sequel. It's rather tongue-in-cheek, almost to the point of being a comedy. It also appears that the gore scenes were dropped this time around given the lighter tone overall and the heavy trims experienced by the first one.

Agreed, the sequel is pretty fun. Hard to beat the brutal 1st one though.