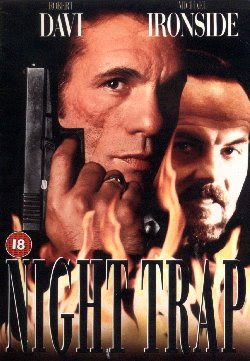 
Night Trap is a slow, plodding thriller from AIP regular David A. Prior.

New Orleans Detective Mike Turner (Davi) is trying to catch a devious criminal named Bishop (Ironside). Bishop has magical powers that include flying, and having a cool but pasted on beard. No one believes Turner that Bishop is evil, especially his captain who thinks he is "on the sauce" again. Turner is then partnered with Williams (Starr) to find suspects who have seen Bishop....as usual in other cop flicks, Williams and Turner bicker and eventually become buddies during their pursuit. Can they find and destroy Bishop before he strikes again?

The main problem with Night Trap is that it really wants to be good, but possibly out of guilt, it sabotages itself at every turn.

Every time Night Trap gets a good rhythm going, it pulls back for a ridiculous action scene and it loses focus. There is one scene where Bishop jumps over a car and the driver inside covers his eyes and then he slowly crashes into another car. 30 seconds later, the car blows up.

Davi puts in a good performance. Ironside has been in better work and he looks like he wants to take a nap. Starr tries his hardest to breathe life into his character, but the script fails him.

Every scene feels like it is in slow motion to stretch out the running time. There are a bunch of scenes with Davi just standing around doing absolutely nothing.

Overall, if you are a fan of Robert Davi, watch it. Anybody else should stay away.