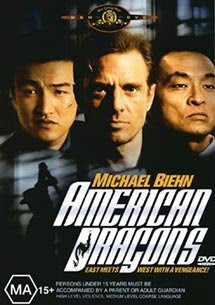 
"East meets West with a vengeance!"


American Dragons is a hugely underrated film that more people should definitely know about.

Biehn plays Tony Luca, an NYC detective working undercover trying to take down the Fiorino Mafia family. When some unfortunate events cause that investigation to "go sideways", he is transferred to another case, in the Chinatown area where there have been some murders. It seems someone is bumping off Yakuza gangsters and leaving a mysterious Black Lotus emblem.  Enter Detective Kim (Park) from the Seoul police department. He comes to America because he has a score to settle with the evil Matsuyama (Tagawa, playing yet another gun-toting bad guy, see Danger Zone etc...). He teams up with Luca, who also has his own score to settle with amoral gangster Rocco (Stark). So it goes that, despite some initial conflicts due to their different cultures, the two pugilistic cops must take down their respective enemies before a mob war breaks out between the Mafia and the Yakuza.

American Dragons is stylish and artsy, yet dark and brooding. It has an engaging storyline, and despite the fact that it has some brutal, gritty violence, it also has some unexpected humor which leavens everything out.

You really get your money's worth, as there are two personal vendettas that must be settled, and two super-evil bad guys that must get their comeuppance. Luckily, there are two heroes, in the form of Park and Biehn. Biehn gets some great lines and seems as intense as the movie itself. Try to imagine a better, more adult, mature version of Last to Surrender (1999). Also, if you can, try to imagine a MUCH better version of Massacre (1985). While 'Dragons shares some plot elements from those two films, what's really interesting is the similarity it bears to Punisher: War Zone (2008), both in the style in which it is filmed and the plot. 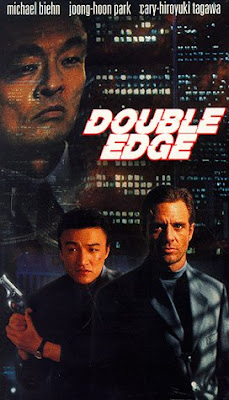 The cinematography truly is a double edged sword here, as it is inventive and stylish, but often the scenes are just too dark to see. It's almost funny how every bar, restaurant, police station or anywhere else in the movie never turns its lights on. A lot of the time it looks like they are talking in the dark. The station house resembles the one from the Law and Order franchises, and that adds to the "police procedural on steroids" feel and even the Captain of the Precinct is reminiscent of that show's Van Buren. But here they're clearly trying to save money on electricity.

The whole movie is a of a much higher caliber than the usual action junk, and you can tell some thought went into everything, from the rockin' soundtrack to the fact that even here there's a training sequence! This, and other clues tell me the filmmakers are action fans themselves and know what they are doing. It's nice to know you're in good hands when you watch a movie.

So remember, "So foul a sky clears not without a storm" and watch American Dragons tonight - it's a cut above the rest.

Okay this is getting trippy, you are buying the same movies I am Ty! Haha.

That is really weird!

Damn! I've been trying to find this film everywhere. Since I live in Croatia that proves to be a bigger problem than imagined. Will probably have to get it from Amazon.uk sometime.

I know I'd love it, Michael Biehn is one of my favorite actors. The man is a legend.

American Dragons is a killer flick! Michael Biehn at his best.

You are totally right. He is a living legend.

I seem to remember reading that Steven Seagal had a co-producer credit on this movie?

As far as we know, Seagal is not involved. If you hear otherwise, please write back.

Sorry, my mistake, i was thinking of DRAGON SQUAD (which also stared Michael Biehn)

Dragon Squad was a cool action movie! Will have to re-watch that one day.