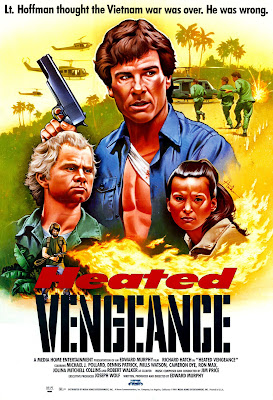 Lt. Joe Hoffman (Hatch) is a Vietnam veteran who, many years after the end of the war, decides to go back to the “Golden Triangle” to find his lost love, Michelle Twassoon (Mitchell-Collins). She was an interpreter during the war, and they fell in love. They even had a precocious, squeaky-voiced son together. But trouble looms for Hoffman in the form of Larry Bingo (Max) - yes, LARRY BINGO is his name. He’s a disgraced army dude who was kicked out of the service for raping one of the locals back during the war. Now he’s a drug runner along with his compatriots Snake (Pollard) and Bandit (Dye). Coincidentally, they run into Hoffman now, in the present day, and, seeing as how Hoffman was Bingo’s commanding officer, and was largely responsible for his dishonorable discharge, Bingo now wants revenge.

He kidnaps Hoffman and stashes him away deep in their jungle hideout. However, Hoffman escapes and has to shoot his way out. Meanwhile, Charlie Pope (Patrick), a toilet salesman (it just keeps getting better and better, doesn’t it?) teams up with Michelle and her son to try and find Hoffman. Will these star-crossed lovers ever reunite?

Okay. For a movie called "Heated Vengeance” and with a tagline like “Lt. Hoffman thought the war was over. He was wrong!”, and with the fact that it was shot primarily in the Philippines and released by Media, one would think this would be a no-brainer awesome action movie. Sadly, there is little heat, minimal vengeance, and a lot of unnecessary talking and stupidity.  Technically, there is some mild vengeance, as Hoffman must shoot some of his captors, and Richard Hatch throws his hatch into the ring as being yet another jungle-adaptive action hero, but this is a drama/love story with mild action elements. It uses the Vietnam war as background. Imagine a less-good Final Mission (1984) or First Blood (1982). Or a REALLY degraded Deadly Prey (1987). Everything about this movie is a letdown, from Hoffman’s strange son, to the slow pace, to a botched use of a flamethrower to the choice of naming the main antagonist “Bingo”. 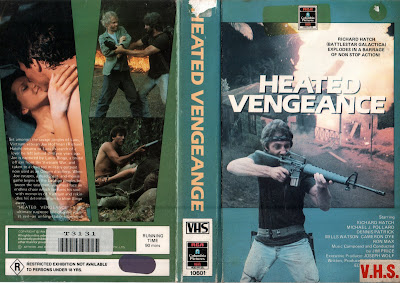 Naturally, the VHS box prominently displays the flamethrower, and mistakenly labels Bingo as “Binko” but who really cares anyway, it’s stupid both ways.  The ending is completely abrupt and feels unfinished, like they had to release it that day and didn’t get to finish editing, or even shooting the complete movie. That just adds to the unfulfilling feel of Heated Vengeance. To add insult to injury, the ever-wacky Michael J. Pollard can’t save the movie with his childlike mush-mouthiness and there’s even further silliness with “comedic” sound effects and tuba music at inappropriate times.

Like many AIP movies, the featured song is far better than the movie itself, and high marks go to Jim Price and his song “Second Chances”.  But this one good aspect can’t support the entire movie. It’s all down hill from there.

Shame that this isn't very good. That last cover scan is from my tape lol (I sent the scan to Jack's blog)... amazing what you can find at garage and car boot sales, but not always good!

This should have been way better! It is unfortunate that this is a super dud.

Also that is interesting you found the movie at a garage sale!

watched this recently also. it was dull, dull, dull. shame.

Definitely agree! It was a huge waste of time.

Always a pity when the movie can't live up to the box cover. At least they unintentionally insulted bingo/binko -- the game of luck w/ absolutely no skill.