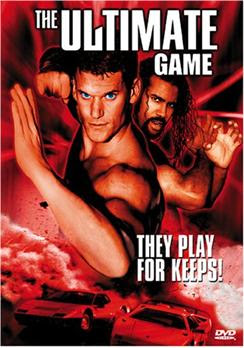 
Jack Grimes (Rifkin) is a martial artist with a wife (Doubleday) and young son (Montgomery). He’s devoted to them, but he’s also devoted to something else...entering a winner-take-all martial arts competition with “fighters from all over the world”. After all the fighters are sent to a remote island by a man named Sato (Christie), promising the winner a million dollars, The Ultimate Game begins. However, it seems a gangster named Ray Ivan (O’Brien) has his own motives, and one of the tournament fighters, Sam (Logan), is in his back pocket. Will Jack ever see his family again?

The Ultimate Game is director Jack Kaprielian’s only directorial effort to date. While we’re sure he put a  lot of work into making this movie, it seems like someone must have commanded him to stop directing movies forever, and he listened. Despite his best efforts, the movie has a junky, homemade look, bizarre dubbing/ADR, and jarring editing decisions. It also has the dreaded “fast motion” effect that ruins movies. On top of the technical issues, the actors involved are more martial artists than actors, let’s just put it that way.

J.D. Rifkin, whose abs do all the acting, plays the John Cena-like main character. The kid that plays his son Joey, who must be like five years old, gives a more energetic and likable performance. Rifkin is also in the hideously awful Total Force (1997), which makes The Ultimate Game look like a masterpiece, as well as the Don the Dragon vehicle Virtual Combat (1995). His nighttime Tai Chi/flexing scenes actually recall Patrick Swayze in Road House (1989). And to top it all off, he’s a stylish man. His choices in vests and purple T-shirts with hiked-up jeans are quite impressive. 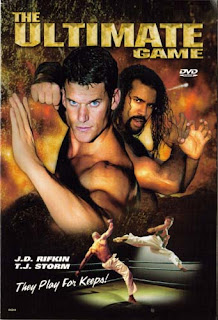 T.J. Storm, who plays one of the fighters and has an awesome name, has had a long career and was even in Punisher: War Zone (2008). He’s also supposedly in Mortal Kombat as “Guest Fighter”, which highlights The Ultimate Game’s resemblance to that video game/movie. There’s even an opponent who dresses exactly like Scorpion in the tournament here. And while this was technically released in 2001, it has a copyright of 1998. At that time, while they weren’t really in their prime anymore, people were still playing games like Mortal Kombat and Street Fighter. Those seem to be the main influences on The Ultimate Game, along with Bloodfist 2 (1990), which also has the “madman spirits martial artists away to an island to make them fight” as its plot. Additionally, Storm wears what must be the first Snuggie seen on screen.

After the “plot” gets out of the way, it’s just back-to-back scenes of the fighters on the beach, well...fighting. And while they do their thing, the other characters stand and watch them. So it’s really about 90 minutes of people with silly hair observing the fighting, and more silly-haired people jumping around and kicking the air.

Granted, there is no CGI or wires, which is certainly a good thing...or is it? Maybe in this case it could have used a little something extra, who knows? Sure, you can see all the moves, as opposed to the “quick cuts” of today but...the movie needed some professionalism. But you’ll be able to find this DVD dirt cheap in places that sell bargain-basement DVDs, and for an amateurish punchfighter, there’s certainly some fun to be wrung out of it.

Ehhhhh this doesn't look that great. There's so many good punchfighters I've yet to watch that I can do without this one.

It is a good idea to avoid it for now. Death Match with the always awesome Matthias Hues is a million times better than this crud.

Thanks Marcus! Haha, that is so true about the manly names.

Hm...I'm not so much into martial arts movie, well it depends. I don't think you need extra stuff to make it a good movie like CGI but like you said, maybe it could have helped a smidge!

It's a shame really, TJ Storm really is a pretty talented guy, he just always gets stuck doing ultra-low budget films like that.

This is a poor example of a martial arts flick! With just some a little polish or directing, this could have been decent.

Also thanks for following us! We appreciate it.

Venom: Definitely agree. T.J. Storm is better than this. He should be in a fight flick with Statham or Michel Jai White.

Haha, that would be hilarious!

Looks alright. Nothing special though.

You're right, Hoaks2. It is not a movie to be excited over. Could have been way better.

This one did look a little dud-ish. I think maybe you took one for the team here-- not hat we all haven't fallen on our share of grenades while seeking out the best in low-budget action. You just never know when you're going to find the next Deadly Prey.

So true, DTVC! We have seen our share of duds. For every 2 good low budget action flicks we see, there are 4 bad ones!

Rifkin is my karate teacher.....

You're a lucky person! Tell J.D. to leave a comment about any memories about this movie if you can.