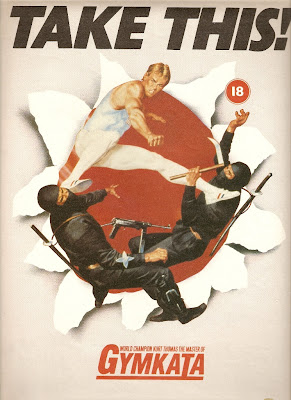 
More like GEMkata! Here’s an excellent example of something that only could have happened in the 80’s - further proof that the 80’s rule!

When the U.S. government singles out the tiny European country of Parmistan for a secret site needed for the nuclear secrets of the Star Wars program, they think all will go smoothly. Instead, the throwbacks of this country have a yearly Most Dangerous Game-like game called...well...The Game. The Feds need someone who can infiltrate the country and not just set up the Nuke sites, but actually WIN The Game as well. So naturally they pick the only man on earth suited for the job: an Olympic gymnast named Jonathan Cabot (Thomas)!

Adding to his Olympic skills, he is trained in the fighting arts by a number of trainers. But it’s going to take all his skill and cunning to beat the sinister Zamir (Norton), the leader of The Game and a ruthless assassin. Jonathan also must protect The Princess Rubali (Agbayani of Norton vehicle Deathfight  fame) from Zamir, who is going to marry her in a royal ceremony without her permission. It’s all spearheaded by The Khan of Parmistan (isn’t that a kind of cheese?) (the great Buck Kartalian). Can Jonathan Cabot flip, flop and fly to freedom? 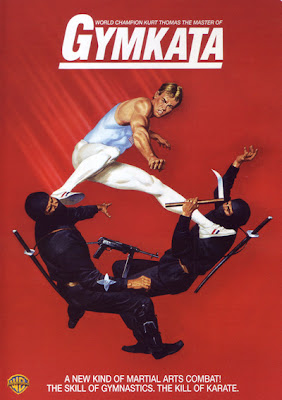 It’s pretty easy math to do: Gymnastics + Karate = GYMKATA! (Presumably the writers felt “gymkarate” didn’t leave much to the imagination). It’s such a great idea. We’re happy it was actually made. What’s hilarious about this newfangled fighting style, and the way Kurt Thomas executes it, is that there are so many unnecessary moves. Never mind the fact that there is Olympic gymnastics equipment in the middle of nowhere that just appears. Sure, Kurt Thomas doesn’t have much of a personality, but he’s not annoying, and his sweaters and mullet are cool.

Richard Norton, a Comeuppance Reviews hero, is great as the bearded, rat-tailed Zamir (who we think might be a master of the pan flute). Not only is the overall concept of the movie imaginative and different, it had the power of Warner Brothers behind it, so it actually had something of a budget and distribution.

Just check out the bombastic, awesome score by Alfi Kabiljo. His booming music helps sell the Gymkata concept and paste over some of the dodgier aspects of the plot and acting. We’re glad director Robert Clouse felt the greatness of Gymkata needed a worthy score. Speaking of Clouse, he was probably trying to do with Kurt Thomas what he “did” with Bruce Lee. Do you think it worked? 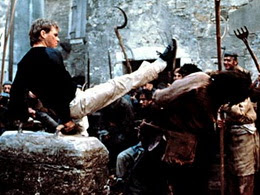 And we got this far without even mentioning the infamous “Town Of the Crazies”! We spend a lot of time there as viewers, so be ready. It comes complete with what every town should have, a pommel horse in the town square. Will it be used? Also watch out for Punchfighting legend John Barrett as a competitor, and Conan Lee of Armed Response (1986) fame. Not to mention the funny ninjas (the movie was shot in Yugoslavia, so we can only assume they are Yugo-Ninjas, perhaps a cinematic first).

There’s an excellent, inexpensive DVD from WB out there that contains the excellent trailer. You must own it. There’s no excuse for not seeing Gymkata.

Haha, Very accurate comment. Looking forward to your take on it!

great review man! i wish i coulda liked it as much as you did, but there were so many bad decisions made and not in the "awfully good" way. like starting with "the game". it wasn't even anything creative, just a bunch of running right? lol. and that ending, ugh, totally ruined it for me. but you're right about that score though. that thing ruled! i'd imagine it would be great music to work out to. lol. like everybody does with the conan the barbarian soundtrack.

Thanks! Yeah, you're right, it was just a bunch of running. One of the best parts of the movie is anytime Kurt Thomas finds a random bar in the middle of the street. That was ridiculous. Also Richard Norton put in a solid performance as the villain.

Plus the 1st training sequence was hilarious.

Gymkata is amazing, pure 80's fun! I haven't seen it for ages!

i saw this the first time because it's always mentioned as a bad movie. the second time i really enjoyed it. the more movies i see for the blog the thinner the line between bad and so-bad-it's-good gets.

overall i have to say it's damn entertaining. there are plenty of bad and boring movies out there.

two personal reasons i love it: i keep thinking of parmesan cheese, due to my love for italian food whenever they mention the country; and that one old guy, the president of parmesan, looks like mel brooks doing a character.

and i have to admit the town of crazies, the bare ass dude and the dude with the mask are pretty damn effective and memorable.

Jesper: Can't agree more! It definitely worth a re-watch!

Playing The Devil: We love this movie too! When they are talking about Parmesan, we were cracking up. Plus the movie is just 90 minutes of ridiculously silly fun.

Also totally agree about the Mel Brooks comment. From "Yogurt" to Parmesan.

Awesome stuff, this is one of the few great cheese classics from the 80's I still have yet to see.

FINALLY. I've been waiting for you to review this forever. Good stuff. Like RobotGeek; I'm not a fan of this but I never turn down an opportunity to read reviews for it.

Ed: Surprised you haven't seen this yet!

Videovacuum: Thanks! It is stupid, but it is a blast to watch. It just needed a little bit more Norton.

Here's a link to my review: http://thevideovacuum.livejournal.com/295819.html

I still stand by it, but honestly if I watched it again after about 6 or 10 beers, I may feel differently.

That is a great write-up. However, we have different opinions.

Sometimes the silliness of Gymkata is appealing and sometimes it is not.

Kurt Thomas never had the chance to make more movies and develop his mullet-based acting style.

Gymkata is one of those Bucket List bad movies every bad movie fan needs to see before they die. I may not have "liked" it but I'm definitely glad I saw it. I think you either groove to the fact that Kurt gets hella lucky that parallel bars and gymnastic horses are literally EVERYWHERE in Parmestan or not.

He did get lucky that their were a bunch of metal bars and pommel horses in the Town Of The Crazies!

This is as fantastic as it gets. Great stuff, glad you had as much with it as I did.

I've been meaning to see this for a while. It sounds hilarious. I like the notion of keeping various gymnastic apparatuses around town...just in case. Great review.

DTVC: It is 90 minutes of silly ridiculousness. Happy you enjoyed it too!

Jack P: Thanks! That is one of the funniest parts of the movie. It is never explained why there are random pommel horses and metal bars around town. Also thanks for your comment\following us. We appreciate it.

I have been seeing this film pop up on a lot of film blogs as late. I really need to get around to watching this film. Sounds like the perfect Saturday afternoon/night type of film.

Now you're talking! I used to have the poster for this when I was a kid. Love Gymkata! Especially when a pummel horse just happens to show up when the guy needs it!

CS: We think you will enjoy it and would be interested in your opinion!

MarkusWelby1: Haha, that very convenient for Kurt! Thank goodness it was hanging around!

I was giggling uncontrollably by the end of your review (which I have been waiting on for some time - gracias). Great write-up - I have now begun my "make Gymkata available for streaming, Netflix, or prepare thyself for retribution" petition.

Your welcome! Happy you enjoyed it. We will definitely sign that petition!

Ohhhhh Gymkata. Only the absolute best of 80's cold war cheese. No awesome bad movies conversation should go without it.

I love this movie so, so much. I did a write-up of sorts on it a while ago...

All of that was really just an excuse for me to show off some of my favorite parts. Everyone goes for the pommel horse right away, but I think the parallel bar in the middle of an alley (where he totally kicks an innocent dude in the face) is also pretty awesome.

Sir Phobos: They should have a made a sequel like you were suggesting. Another great bit is when Kurt Thomas is training to do Gymkata. Hilarious montage.

The training bit is great, too.

Honestly, though, a sequel would have probably ruined everything. You said something about Kurt Thomas never getting to do more movies. Well, that's probably for the best. As it stands, we all have this testament to the awesome that was the '80s with this movie. If this kind of thing were to be re-created now, it would most likely suck through-and-through. I'm proud to own this on DVD, and I try to show it to people whenever possible.

Good point! This could only come out in the 80s. We are also proud to own this on DVD. We are happy it made it to that format. Finally a widescreen transfer.

Wow, a really lively debate here Ty, this one has eluded me, I think it's time to pick it up and give it a go! Great stuff.

Thanks! 30 comments is pretty insane! We love having a Gymkata debabte. Looking forward to your take on it!