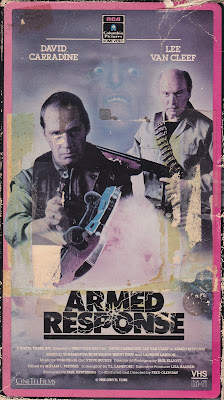 Jim Roth (Carradine) is a Vietnam veteran, family man, and owner of a bar. His father Burt (Van Cleef) hangs out there, as do other brothers Tommy (Huff) and Clay (Goss). It’s a close family, as Jim’s wife Sara (Hamilton) and young daughter Lauren (Chodan) also stop by on occasion. But the Roth family is about to encounter some trouble in the form of Yakuza boss Akira Tanaka (Mako), who desperately wants a valuable statue and will stop at nothing to get it, mainly because he will use it as a bargaining chip to prevent a Chinatown mob war with the Tongs.

When Clay stupidly gets involved with Tanaka (and his evil bodyguard F.C. (Berryman), it sets off a chain of events where various members of the Roth family get in trouble - and Jim, who suffers from Vietnam flashbacks and nightmares, must team up with his, and I quote, “pappy”, Burt, to go back into an American-Asian war by gearing up to blow away the Yakuza. Add into this mix the slimy Cory Thorton (Hagen), as well as other various and sundry unsavory characters, and there’s going to have to be an ARMED RESPONSE! 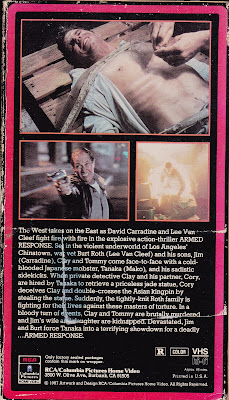 The prolific Fred Olen Ray followed this movie up with Cyclone (1987), and you can identify this period of his long career, as the two films share many traits. They’re both fast-paced actioners loaded with B-movie stars about underworld characters trying to get a certain item, with one torture scene. They also both have that 80’s vibe and plenty of memorable music on the soundtrack.


It’s truly a case of “spot the stars” as almost every character in the movie is a B-film name. It would be impossible to go into detail about each and every one, but Lee Van Cleef is memorable as the dad we all want. He gets all the best lines in the movie. Why he’s supposed to be David Carradine’s - as well as Brent Huff’s - FATHER is kind of weird, but it adds to the fun. Carradine puts more energy into his performance than he did in Future Force (1989), but that’s not saying much. And the daughter, Dah-Ve Chodan, can proudly stand in the pantheon of cute and precocious daughters alongside Lauren Levy, Sarah Dampf and Lisa Boynton. Mako brings his memorable voice and evil walking stick along and is menacing as the baddie. And it’s nice to see Michael Berryman in an action movie. 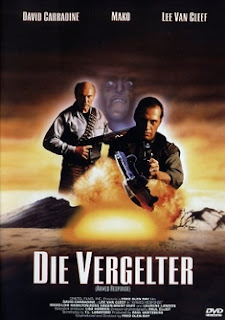 From the funny opening, to the prerequisite barfight, to the fact that the Vietnam flashbacks provide added action bits, as well as some depth of characterization, to the stuntwork (featuring all the car chases and shootouts you would expect), and the fairly short running time, Armed Response certainly doesn’t overstay its welcome.

The “older” action stars Carradine and Van Cleef show that you don’t have to be a young punk to beat the baddies, and there’s a nice message of family togetherness and even some Reagan-era patriotism, which we always like seeing.

Armed Response is a nice little flick that’s certainly worth checking out.

Didn't like this much back in the day, I suspect I'd find it much more entertaining now, nice review!

Wow! Been meaning to check this one out since forever! Thanks to you i finaly got the right boot in my ass to get to it :)

I skimmed your review just because I have this on my radar too-- love the combination of Carradine and Olen Ray-- but I'm glad this looks like a fun time. Good stuff.

Dude! I wanna see it! lol. I remember this one too! I'm telling you man, we coulda been brothers. lol. My brother and friends were usually into horror back then, as was I, but action was always my favorite and when you bust out an old VHS cover of some random direct to video flick from the 80's and 90's I start getting serious falshbacks. ha ha ha!. Great job man!

A Hero Never Dies: Thanks! It is our guess you would find it enjoyable today.

lizzardking: Amazon is always open for your Armed Response needs! :-)

DTVC: Thanks! The other cast members really shine as well. Especially Brent Huff and Berryman.

RobotGEEK: Thanks for the kind words. Maybe we were separated at birth!

One of our goals is to bring back fond memories of the VHS era. We're really glad you appreciate it!

Ooh, Armed Response. Haven't seen that in ages. Had the VHS. My grandmother loved it. Gotta love Van Cleef.

Can't agree more! Lee Van Cleef is always entertaining! That is cool your grandmother loved it. It is a fun movie.

That's one heck of a cast. Good stuff.

Thanks! It is silly fun. Carradine and Lee Van Cleef make a good team.

I love seeing old guys beating punks asses! Anything with Lee Van Cleef AND Carradine has my vote from the start. You've been on a role lately - I can't even keep up with all the righteousness.

Thanks! Anytime an old person beats up snot-nosed punks or baddies, it is always awesome!

Wilford Brimley and Lee Majors should team up for a vigilante flick.

I reviewed this one a while back. Good fun all around. Carradine and Van Cleef were an awesome team. Plus, I have a soft spot in my heart for anything Ray directed in the 80's.

We totally agree. You pretty much said it all. Wish they made more movies together!

his son is directing asylum movies!

i guess it kind of makes sense since dad fred worked with roger corman.

Like Father, Like Son! His next Asylum film looks pretty silly: Two-Headed Shark Attack, with Carmen Electra! Will definitely watch that.