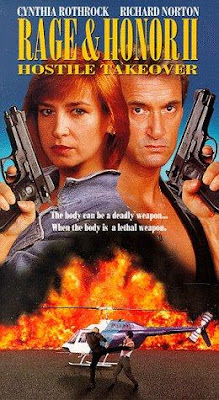 
Rothrock and Norton reprise their roles as Kris Fairchild and Preston Michaels in this sequel that is superior to the original film.

Kris is now a CIA agent who is sent to Jakarta to go undercover in a bank to investigate the money laundering of Gerald Andrews (Soucy).  Meanwhile, Preston works in a run-down bar and does a lot of boxing on the side. For some unknown reason, he takes on a spoiled, unlikable, arrogant student, Tommy Andrews, the son of Gerald. As it turns out, Gerald is working closely with nefarious gangster Buntao (Tumbuan). There’s also a cache of diamonds at stake in the ensuing gangster wars, with Kris and Preston caught in the middle. They’ll have to use their teamwork and fighting skills to get out of this mess... 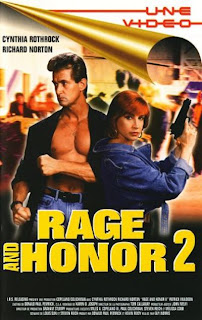 Rothrock and Norton are always pleasant to watch, both individually and together. There are some nice fights in this film, and, as always, you can actually see the action with no stupid tricks or fast cuts. There was some cool inventiveness as well, as Norton beat up a baddie with a raw fish, leading to perhaps the first “fish-fighting” scene in recent memory.  For as awesome as Rothrock and Norton are, Patrick Muldoon is as lame. Well, his character as a preppy jerk is pretty effective. Maybe it’s not Muldoon, it’s Tommy Andrews who the audience will not like. Buntao is more likable.

Also we have Ron Vreeken as the classic heavy/bodyguard, the man they call “Blondie”. I guess they couldn’t get Matthias Hues. Vreeken was last seen in the Norton vehicles Deathfight (1994) and Under the Gun (1995), so they must be buddies. He was also seen in Hurricane Smith (1992). 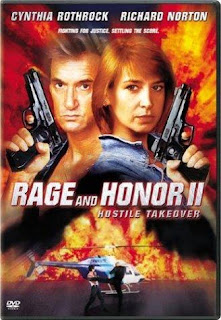 Director Guy Norris, presumably no relation to the Norris family that produced Chuck, Aaron and Mike, primarily is known for his stunt work, having been the stunt coordinator on countless films, including Day of the Panther (1988) and the aforementioned Hurricane Smith. It was a wise choice to put him in the director’s chair because he understands action and delivers plenty of it to the audience, leading to the rare improvement for a sequel.

You can rarely go wrong with Rothrock and/or Norton, as this golden-age-of-the-video-store action movie amply proves.

I'm always interested in seeing Rothrock and fish fighting. I miss the days when action stars were able to actually do the choreography, and didn't rely on horrible editing techniques to look cool.

We totally agree! There was no need for quick cuts or CGI in the 80s\early 90s.

Tip-top review. I just put a bunch of Rothrock movies on my Netflix Queue. Lord knows when I'll get to watching them, but it's nice to know they're there.

Good one!
Norton is always fun to watch, whether he's a good guy or a bad guy.
I actually remember this one, but it's been forever. I'll need to dig it out and see it again!
Did Norris do anything else?

Videovacuum: Thanks! Very cool. Maybe one day, you can do a marathon of Rothrock!

RobotGEEK: Totally agree. Norton is always entertaining. We have one more movie with him for Richard Norton Week. It will be posted Saturday.

I like Richard Norton, I heard of the first one, had no idea there was a sequel though. It does seem like it'll be a cool movie and not a waste of time.

We are Happy you like Richard Norton too! He always brings the goods. This was a solid sequel!

Speaking of fish-fighting, Mega Pirahna took it to new levels. Think "John Cena-ish dude bicycle kicking mutant piranha as they leap from the water". It's a great party movie.

Haha, that is hilarious! Will have to watch that with my buddies!

My dad actually caught the end of this with me, and he was enjoying the scene where Norton beats the crap out of Tommy as much as I was. "Come on Tommy, you can do better than that. Come on Tommy."

That was one of the best scenes in the movie. Tommy deserved it!