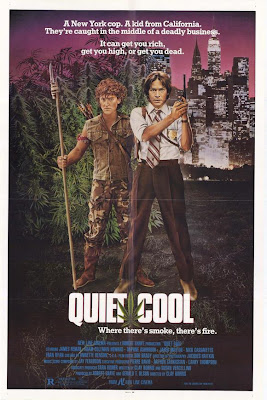 
Joe Dylanne (Remar) is an NYC cop on the edge who always gets his man. One day, he gets a call from his former girlfriend Katy (Ashbrook), asking for his help. It seems some of her relatives have disappeared and she wants Joe to investigate. He agrees, and he travels to a very, very rural town called Babylon somewhere in the Northwest (the movie doesn’t specifically say what state, but it was filmed in California). It turns out that evil marijuana growers and dealers are taking over the town, and Katy’s family ran afoul of them. The only survivor was Josh (Adam Coleman Howard). Now the city cop with the bad attitude and the rural survivalist boy must team up in order to get revenge on the baddies, led by Prior (Martin) and Valence (Cassavetes).

Quiet Cool is a highly entertaining and solid film that deserves more attention. God bless the 80’s, when movies like this were being made by the boatload. The only problem is, the quality was coming so thick and fast back then, it was hard to keep up and a lot of movies that should get more recognition fell through the cracks. That’s yet another reason why video stores are so important. Quiet Cool is one of those movies. It’s 80’s awesomeness through and through, from its sax-drenched soundtrack to its Western-style ending. 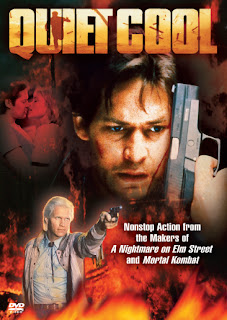 Remar is perfect as Dylanne, the guy that doesn’t go anywhere - ANYWHERE - without his motorcycle. He plays the country mouse/city mouse role but with an edge. He’s a law and order kind of guy, but realizes that these villains are ruthless and evil, and this is now the law of the jungle, or at least forest. His conversion to the ways of revenge will have you cheering. Howard as the boy who shows a surprising aptitude for killing people is a worthy foil. Cassavetes as Valence strongly resembles Elvis.

It’s important to remember that back in the 80’s, pot dealing was thought of as a much more serious threat than it is today. Now all the pot stuff you see is played for dumb laughs, so, when viewing Quiet Cool through 21st century eyes, you might say “what’s the big deal”, but that’s incorrect. You have to think back to Nancy Reagan and “Just Say No”. Here, the pot dealers are EVIL and that’s perfectly valid. In many ways, Quiet Cool resembles The Devastator (1985), but it had the power of the burgeoning New Line behind it, so it just has a more professional look.

Naturally, there is a title song, and this one’s very impressive. It’s rockin’, it says the name of the film, and is unbelievably catchy. “Quiet Cool” (the song) by Joe Lamont should have been a huge hit on the charts. Quiet Cool (the movie) has some good violence, and doesn’t waste a minute of your time. With a schedule-friendly running time of less than 80 minutes, there’s no excuse for not checking out this fine film.

How did this not get four stars? I must find it for the theme song alone ...

Thanks for another recommendation. I'll have to check this out. I always had a soft spot for James Remar. I recently watched the 3rd Blade movie, Blade Trinity (pretty meh flick), and when he showed up for his little bit part in the movie as an FBI agent I was all "HEY! JAMES REMAR, DUDE!" like a total spaztard. I kept waiting for him to pop up and mistake Wesley Snipes for Eddie Murphy and try to gun him down, but it never happened.

And Daphne Ashbrook. She was quite a babe back in the day.

Holy shit! I remember this one! Man, but it's been FOREVER! I wonder if it's just as good as I remember. lol. I'll have to look this one up. Great review man!

Dr. Blacksteed: We might have to bump up the rating! The theme song is super catchy!

Matthew Conway: No problem. Totally agree with you: James Remar is very underrated. Haven't seen Blade Trinity yet (heard it was pretty bad), A friend let me borrow it. Will keep an eye out for Remar.

RobotGEEK: Thanks! Would be interested in your opinion on it! Hopefully it still holds up for you.

I heard of this film before! This is an awesome recommendation especially for the music!

Thanks! Would love to get your opinion on it, Real Queen Of Horror! The theme song is really cool.

I certainly don't have any excuses, so I need to check this out. Also love that it's a "Q" movie. Always need more "Q" movies in the archives.

When you say big fans of X movies, I hope you're not referring to Xanadu.

Great movie and great review! Here´s my two cents on it :)

Thanks. We totally agree with you! This was a fun action flick with James Remar at his best.