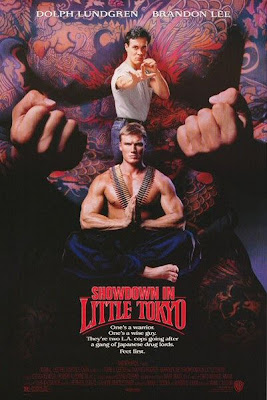 Kenner (Lundgren) is a cool L.A. cop working the Little Tokyo district of town. He grew up in Japan and is familiar with its culture. When he was a kid, his parents were killed by a member of the Iron Claw gang, Yoshida (Tagawa). Now that the Iron Claw is in America and ready to step up their criminal empire using a brewery as a front to distribute the drug Ice (more deadly than “Rock”, so we’re told), it’s up to Kenner and his enthusiastic new partner Johnny Murata (Lee) to stop them. Also Tia Carrere is on hand as  Minako, a performer in an Iron Claw-controlled club that Kenner wins over, as is Death Match’s (1994) Renee Allman in a small role as Minako’s friend.

What we have here is classic Dolph from start to finish. Which, incidentally, doesn’t take very long, as the movie is 78 fast-paced minutes, and that includes the opening and closing credits, so it’s probably closer to 70 minutes or so. But in that brief time, we’re treated to nonstop action and all the other trademarks of movies like this - constant wisecracks and one-liners, the obligatory torture and training sequences, flashbacks, fight scenes, nudity, blow-ups and the like. It distills the action movie down to its barest elements and is incredibly entertaining and fun for doing so. This is a film that knows its audience. 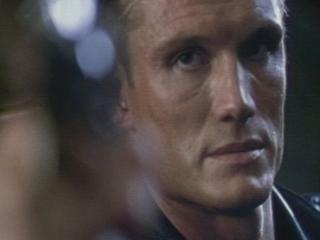 Showdown in Little Tokyo is incredibly juvenile, but in the best possible way. It seems like the movie was written by a team of middle school-aged boys who simply wanted to get their adolescent fantasies on the screen. Just bring on the action and girls and let subtleties, complexities or consequences be damned. You gotta love it. We should all be glad the parents never came home while they were making this movie. It would be far less of a gem.

Dolph has a great entrance too. He swoops in on a rope and interrupts a punchfighting match! As he and  Johnny are members of the “Asian Task Force”, they are able to bond through that. They start off as “the original odd couple” - Kenner speaks fluent Japanese, lives in a Japanese-style house he “built himself” and knows everything about their culture, and he’s the whitest thing on the planet since Wonder Bread. Johnny Murata is supposed to be Japanese, but was raised in America and knows nothing about his own culture. As you can tell, I’m reaching to find some subtext here (!) But it is interesting how the Yakuza gangs all love big, classic American cars. Oh, and Tagawa plays yet another heavy, and he and Dolph would square off again eight years later for Bridge of Dragons (1999). 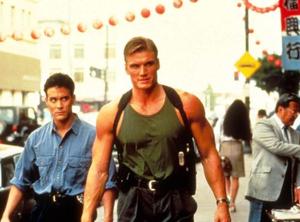 It’s silly, it has humor, most of the characters wear big, loud, colorful suits, and it’s all supported by a rockin’ electric guitar score. It’s hard to imagine another movie that asks so little of you and your time, yet delivers so much. Everyone should own a copy of Showdown in Little Tokyo, and the world would be a better place if action movie makers followed its example.

A downright classic. Dolph and Lee play well together and it's a shame they couldn't do any sequels.

Hey Ty! :) I just nominated your blog for BEST ACTION blog over at THE MOVIE 411 BLOG AWARDS. You should receive your nomination badge on your e-mail within 24 hours. :)
Read the rules and post the badge on your blog.

For more details regarding the awards, visit this link:

Explosive Action: Can't agree more! It would have been great to see sequels.

Nebular: Thanks for the nomination! We will definitely post the badge on our site!

Holy crap! You beat me! lol.
I was actually writing my review on this last night but didn't finish after deciding to post a different review. I finally sat down to watch this on Sunday and had a blast.
Great review man, as always. :)

Thanks! Looking forward to your take on it also! This was one of Dolph's best.

Oh yeah, this one is hilarious. I did a recap for it over at The Agony Booth a few years ago. It's brilliant in how insane it's willing to be.

YES!!! excellent review of bar none the best Dolph film ever made. I think you should celebrate by eating sushi off naked chicks.

Ed: This was a blast! Loved everything about this! Non-stop action fun.

Videovacuum: Haha, excellent idea! I'm going to a sushi restaurant this weekend anyway. They should bring out the naked chicks!

Totally agree with you, Hellford! Showdown In Little Tokyo is a classic action flick!

Ah, I remember checking this one out from my local library, classic film! Real shame that Lee died on account of someone having no concept of gun safety.

That was unfortunate that Lee died. We missed out on more action films from him.

"you have the biggest dick I've seen on a white man" priceless dialogue in this one! Wish Brandon Lee was still around to give us more Comeuppance style action!

Totally agree with your comment! At least Brandon Lee made a couple of classics before he died.

Agree on everything. This is one of my all-time favorites, and a big reason why I got into B-movies.

It is easy to become hooked on Dolph and action movies in general after seeing this gem of a movie!