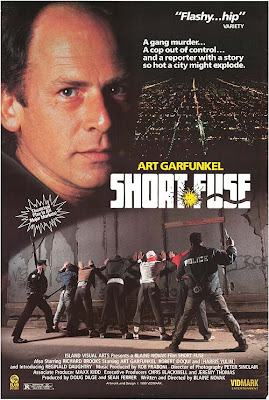 AKA: Good To Go

In Washington, D.C. in the 1980’s, Go-Go music was huge. Go-Go is an urban cross between funk, R&B, soul and dance music with extended songs meant for the largely African-American audiences to dance the night away to. Some of the most famous practitioners of this genre of music include Trouble Funk, Redd & The Boys, and Chuck Brown and the Soul Searchers. Max (DoQui) is a music impresario and label head who is trying to make this music go global and has a large record deal in the works for Redd & The Boys.

Spoiling this dream, a rape and murder occurs outside a club that caters to the music, called, you guessed it, The Go-Go. Or did it? Trying to get to the truth, alcoholic newspaper reporter S.D. Blass (Garfunkel) calls Chief Harrigan of the local police precinct. Harrigan leads Blass to believe Chemist (Brooks) was involved in the crime. But along the way, Blass befriends Chemist’s little brother Beats (Daughtry) and begins to question Harrigan and his motivations. After a lot of chaos and confusion, Blass begins to sort things out - but he’s going to have to do it fast before a race riot occurs in D.C. Can he do it?

Please read in a gravelly, portentous, gravely serious Don LaFontaine-like movie trailer announcer voice: Art Garfunkel. Has a: SHORT FUSE. Coming this summer. When we think of actors that could be chosen for the lead role in a movie entitled Short Fuse, names like Clint Eastwood, Charles Bronson or Jason Statham come to mind. But for some reason yet to be fathomed by mankind, they chose noted badass Art Garfunkel for the role. And true to form, in this movie he’s such a wet noodle that he makes Toby from The Office look like The Ultimate Warrior. But in all fairness, this movie was originally titled Good To Go (and characters do say that a lot and there’s a song of the same name on the soundtrack as well).  Adding weirdness to inappropriateness, the main thrust of this movie is urban, street-level crime, in the era of boomboxes, graffiti and Kangol hats. Again...Art Garfunkel? But seriously, we could see what they were thinking because “Bridge Over Troubled Water” has some fresh beats. 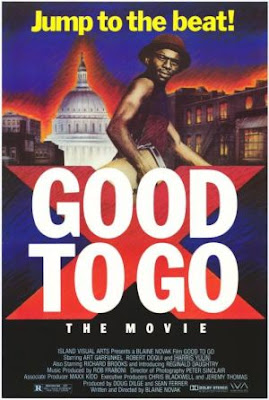 And if they were so gung-ho for Garfunkel, why hire Harris Yulin as the only other White guy in the cast? They look very, very similar. So much so it’s hard to tell them apart in some scenes. But the tell is Garfunkel’s bizarre combover. It makes Donald Trump’s look positively normal by comparison. Plus the movie has a lot of product placement for Pepsi. It’s practically a 90-minute commercial for Pepsi. But it’s hard to imagine the Pepsi people being very happy that a movie about a drug-fuelled rape and murder with a bunch of shootouts and car crashes is so tied in with their product.  That observation aside, by far the best thing about Short Fuse is not, as you might expect, the length of the fuse of one Arthur Ira Garfunkel. It’s the music!

In all seriousness, the soundtrack and the live performances are uniformly excellent. All the bands mentioned above are excellent, both musically and from a showmanship perspective. We really were dancing in our seats! As a concert film documenting the Go-Go phenomenon, Short Fuse is actually an important “Art”-ifact. Robert DoQui, who was in Diplomatic Immunity (1991), and resembles Richard Roundtree but is an accomplished actor in his own right, is always worth seeing, as is future Law & Order star Richard Brooks, who also appeared in Shakedown (1988). Short Fuse is listed in some sources as a “concert drama” and seems to be little-seen, even though it was released on the Vidmark label. But the cast, as well as the musical performances keep it from ever getting boring.

Witness Art put the “funk” in “Garfunkel” and watch this oddity today!

I can't believe I've never heard of this. When I saw the cover I was in disbelief. That's the stuff dreams are made of. My only complaint is that Garfunkel should have been the out of control cop. That would have made this even more legendary in the rudeness stakes. I wonder if Billy Joel ever starred in a film called 'Time Bomb' or 'Danger Zone'? Suffice to say the cover of 'Short Fuse' is now my Facebook profile pic.

Art Garfunkel???
So I take it there's no action in this thing whatsoever? lol. Interesting to see this title on here as it's not the usual Comeuppance Reviews fare.

Force_Field: You nailed it completely, that was our reaction to the cover too! Also we completely agree that Billy Joel should have been in some action movies (along with Fabio, who sadly hasn't made any action movies...there is still time)!

Thank you for making it your Facebook profile pic - We live to turn people on to odd movies like this.

RobotGEEK: There is some mild action here and there, but Art Garfunkel doesn't display any martial arts skill or get into any gunfights sadly!

There are no words. If I never read another word on your blog - or any blog, you have changed my life.

Is there a cinematic equivalent?

Thanks! We appreciate the kind words!

Also: Haha, Steel always looked hilarious...Will have to pick up a copy one day. Shaq as an action hero is a silly (but great) idea!

Yeah, I think you'd definitely enjoy Steel, it's fully aware of how silly it is, unlike superhero films like Captain America(not the Pyun film) which are far too full of themselves.

Cool! Will definitely pick up a copy soon...plus it does have Richard Roundtree and Judd Nelson!

I'm once again impressed by the uncovering of this apparent gem. "Art Garfunkel has a SHORT FUSE" priceless.....just priceless.

Thanks! Art Garfunkel should have been the next Stallone!

I've still got this on video, but I've never got round to watching it it, but anything with TROUBLE FUNK can't be too bad? You should check out the UK video art (it's worse than the U.S release)

Trouble Funk has some great songs in this! Will have to check out the UK art.

This looks great! "Art Garfunkel has a short fuse!" I definitely need to check this out.

It is the ultimate tagline!

It is pretty good for the entertaining music though. Would be interested in your take on it. Art Garfunkel should have participated in some gunfights. Haha.

i believe this movie has the best tagline of all time.

Haha! They can't do that today. Classic 70s.

Cockfighter is a great movie. Warren Oates at his best!

I'm actually watching " Good to Go" as I type this comment. I was searching for a S D Blass to see if he was a real person or a character in the movie. My dad is Big Tony of Trouble Funk. This is a deep movie and brings a little clarity as of why Go-Go didn't really make it out of DC. I mean my dad as played overseas and they love it; but within the states, Go-Go never really made it mainstream. I looooove this movie!

Trouble Funk's music is definitely one of the high points of this movie.
Good To Go captures a moment in time and one of the only films that we know of that features Go-Go music.

Does your father have any specific memories of shooting this movie?

We would love to hear what he has to say.

I couldn't help laughing when I saw the Art box...I mean box art. Since the movie is called Short Fuse, shouldn't it have starred Paul Simon?

Haha, maybe...but it's clear that Art Garfunkel is the ultimate action star.