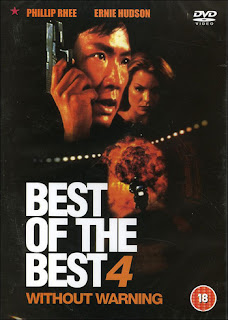 Tommy Lee is back! Not the Motley Crue drummer of course (in the press he’s always Rocker Tommy Lee, and he’s called that so often he should just legally change his first name to Rocker) - It’s Phillip Rhee, and this time he teaches martial arts to police officers. He has a young daughter, Stephanie (Jessica Huang), and life seems good.  All this ends when a gang of Russian-type mobsters, working out of an abandoned warehouse (where else?), begins a large counterfeiting operation. The details of this illegal activity are on a disc, and Tommy inadvertently ends up with it.

Now on the bad side of criminal mastermind Slava (Bell), as well as his many goons, including Boris (Thorsen), he entrusts Stephanie to a priest (Gleason), so he can go off on his own and fight the baddies. But while he has some friends on the force, notably Jarvis (Lemmon), he also butts heads with the hard-line Detective Gresko (Hudson). Can Tommy Lee stop the counterfeiting agents, rescue his friends and daughter from imminent doom, and clear his own name in the process? 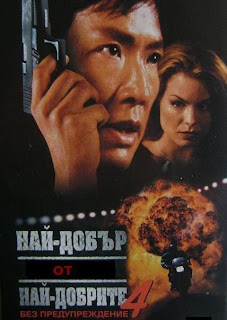 Some people might think about the Best of the Best series, “there are FOUR of them?” While it may seem puzzling and hard to justify, this fourth entry in the series was solid fun and worth seeing. Phillip Rhee is a very talented guy - he stars in the film, he directed it, co-wrote it, and he’s a gifted martial artist and worked on the choreography. He’s also likable. Rhee does seem to have well-rounded skills, and because of this, his name should be more well-known outside of die-hard action circles. He’s so badass, he doesn’t turn off his lights at night using a lightswitch like a sucker, he JUMPKICKS his lights off.

Supporting him is an impressive array of B-movie names. Tobin Bell puts in an understated, low-key villain performance, which was a welcome change from the frothing-at-the-mouth baddies we usually see. He pulls off a tricky balance - be subtle but not be boring. He does a great job, and, interestingly, there’s some pre-Saw torture he’s involved with. Coincidence? Or did the makers of the unending Saw franchise see this movie and picture him as the ultimate torturer? And speaking of people who probably saw this movie, there’s an American Beauty (1999)-like fantasy sequence one year before that film. Is it possible the American Beauty people saw this movie and thought, “If we rip this off, no one will know, because we don’t share any of the same audience”? 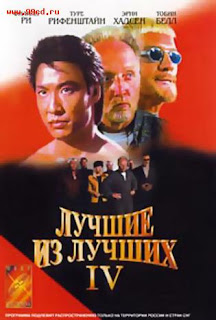 Hudson plays the BYD (instead of Black Yelling Chief, here he’s a detective) and there’s even a fight scene between him and Rhee where Hudson attempts some Hudson-Fu on him. Chris Lemmon’s not in it that much and resembles Joe Piscopo. It’s no Firehead (1991) for him. Paul Gleason, Art LaFleur and Sven-Ole Thorsen round out the cast of familiar faces, and someone who’s been turning up a lot lately, David “Shark” Fralick (Deadly Reckoning, 1998, Executive Target, 1997 Inside Edge, 1992) is on board as well.

A highlight of the movie is a combination stickfighting/fencing fight scene. We don’t believe we’ve ever seen that before. While the movie falls prey to a cliche we see often “We’ve got to get the disc!” - a movie about a disc - Best of the Best 4 has a lot to offer in the pure entertainment department. Regardless of how you feel about the other Best of the Best movies, you should see this one if you love that implausibly-plotted-but-who-cares-let’s-have-fun action style pioneered in the 80’s.

Can't believe you didn't mention the bit where they try to pass off a toy helicopter as a real one. So fake but so funny.

This film was okay but I'd probably say its a slight step down from 3. Kudos for Rhee writing, directing, starring though.

Weird how this series of films turned from a Karate Kid/Kickboxer rip-off into an Action Thriller movie.

Haha, whoops. Should have mentioned that! We liked the change to Action-thriller...Hopefully they will make a part 5. It's not too late!

Yeah this one was entertaining but it's no part 3. Some trivia, one of the stunt coordinators for this film(Mike Mccoy) is the director of that new film "Act Of Valor"(which i'm very excited to see tonight BTW)

Also definitely tell me how Act Of Valor is. That's cool he is one of the stunt coordinators of this movie. Thanks for the info!

I really liked this one too, and I think it works perfectly the way you've set it up-- as the fourth in the series, seen right after seeing the others. I saw it right after part 3, because it came on a double disc, and the multiple Rhee effect really enhances it. Gotta love Phillip Rhee.

Phillip Rhee is vastly underrated. He should do more action flicks like these.

Saw Act Of Valor and loved it, the action scenes were some of the best and most realistic that i've ever seen, having the main characters played by real SEALS captures realism in a way real actors can't, most critics say they're acting is wooden, which is kind of true, but when you've seen tons of awful ultra-low budget DTV films from companies like Maverick they're acting looks pretty good by comparison (and they can act circles around "pretty-boy" actors like Robert Pattison) it's one of the most unique film experiences i've had, so i'd definitely recommend you guys all check it out.

Nice! Will definitely check it out. Don't mind that the acting is wooden, as long as the action is good.