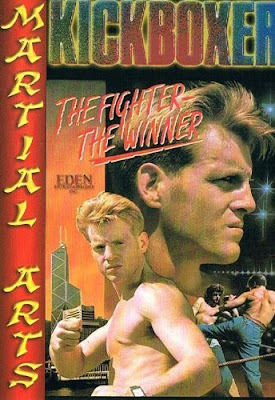 
Here we have another Godfrey Ho concoction, seemingly made from a patchwork quilt of sources, as is his way. There’s what seems to be a Philippines-shot production about an escalating gang war between the Antonio gang and its rivals. Apparently a gang lord named Luke must defend his turf from such other quintessentially-Filippino names such as Alan, Dave, and the Yul Brynner-like bald guy named Brownie. Don’t forget their lawyer, Barry. Stitched into this plotline we have the tale of Buster, a short, stocky, balding man with eye problems who is an expert kickboxer (think of him as a more violent George Costanza). His corrupt manager Mr. Crocker wants him to take a dive, but Buster is incorruptible and pure, and won’t do it...or will he?

And as if that wasn’t enough plot for you, there’s also the story of Gordon, a white man in Hong Kong (or perhaps the Philippines, it’s impossible to tell), a man who used to be on the underground fighting circuit (WAY underground - they fight in abandoned castles, structures and buildings for very limited audiences, but perhaps pioneering the genre of “Castle-Fighting”). He quits the Punchfighting life and becomes a construction worker. But his old life may come back to haunt him...Will any or all of these plotlines come together - or make any sense whatsoever? And who would care or notice if they did? Find out tonight!

When you put on a Godfrey Ho movie, you never know what you’re going to get. I believe that line was in the movie Forrest Gump (1994). We’re happy to report that Kickboxer: The Fighter The Winner (you wouldn’t dare confuse that with the similarly-named Van Damme vehicle, would you?) is an amazingly fun great time. It’s not QUITE up to the par of Clash of the Ninjas (1986), but it’s close. The movie is filled with uproarious dialogue/dubbing, a bizarre structure, an odd pace, memorable music, and hilarious implausibilities. In other words, great entertainment from start to finish.

We guarantee there are things in this movie you have never seen on screen before. Don’t worry, no spoilers are forthcoming. But while the gang war plotline is entertaining on its own - the clothes alone are mesmerizing - every time the character of Buster appears on screen, everything brightens and the movie is at its best. It needed more Buster! Other movies need more Buster as well. He’s a very flexible man who has a punching bag in the middle of a boxing ring, which seems to be in the middle of an existential nowhere land. He won’t compromise his principles. He’s an everyman, not some Hollywood pretty boy. Buster shows us you can be comfortable with who you are as a person and maintain your integrity. God bless this wonderful man. Buster, we hardly knew ye.

Haha, I know! The movie was so weird and crazy, you can't help but like it!

I like your point about these films having illegal underground fighting tournament somehow simultaneously be big profit events but attracting embarrassingly low crowd numbers!

The three stars have got me intrigued. May have to make an exception to my "Geoffrey Ho rule". Which of course is "never watch anything directed by that hack Geoffrey Ho".

Haha, that is one of the most hilarious parts. About 10 people in the crowd, but shot to look like hundreds!

Would be interested in your opinion. Godfrey Ho is ridiculous, but this movie (and Clash Of The Ninjas) are some of his better movies!

So is this supposed to be slightly related to the Jean Claude classic? I know they did some crappy sequels to that, but didn't know if this was part the franchise. "Clash of the Ninjas" sells me on that title alone!

Hmm not really. It is mostly trying to cash in on the "Kickboxer" name!

This looks like a lot of fun, I'll have to give it a look. Always good to see more Godfrey Ho.

It is very silly! Godfrey Ho at his best. But of course Undefeatable and Clash Of The Ninjas are tough to beat.