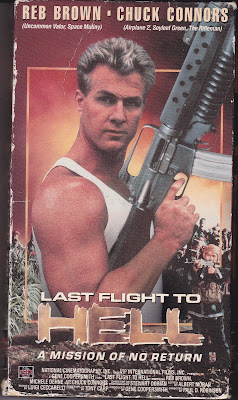 "A mission of no return."

Mitch Taylor (Reb) is a DEA Agent but seems more like a Rambo-style warrior. He travels to the jungles of the Philippines (where else?) because he’s trying to find Vince Duggan (Monty), a drug dealer who is trying to evade the law. Duggan’s daughter Sheila Madison (Dehne) teams up with Taylor because she has a vested interest in finding her father alive and wants to be sure he isn’t killed. Taylor’s commanding officer is Red Farley (Connors) - but he has a secret. What is it?

Last Flight To Hell is something of a mixed bag. On the one hand, you have moments of sheer ridiculousness which are amazingly fun and entertaining. But on the other hand, there are some pretty lengthy stretches where nothing much happens and the proceedings get rather boring. In this schizophrenic situation, it’s hard to determine where this movie really lies on the entertainment spectrum. Fan favorites Reb Brown and Chuck Connors are on board, as is lower-tier favorite Mike Monty, but there are some scenes where none of these men are involved, and those are the slower parts. Reb is the classic Reb you want, yelling it up as the true action hero of the 80’s. Here, more than anywhere else, he looks like a baby-faced Martin Kove. 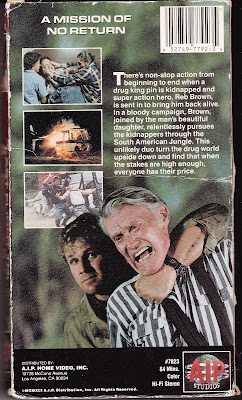 Chuck Connors seems more animated here than usual. He laughs, yells and jokes it up. Compare this to his stone-faced performance in Sakura Killers (1987). Perhaps there he didn’t want to get in the way of the raw animal magnetism of George Nichols, so he didn’t even try. Here, he buddies it up with Reb in a nice way. As for his name in the film, Red, other characters, including Reb Brown himself, call him “Reb.” Whether this was an in-joke, or something lost in translation, or just a misunderstanding, we don’t know. And there’s even a scene where Chuck is wearing a black and white striped shirt (or so it seems, it could be horizontal shadows), and another character calls him “Ref”. So suddenly he’s the ref of the jungle? But that striped, collared, short-sleeved shirt makes him look like one of the Beach Boys getting a bit long in the tooth. A Beach Man, if you will.

But like how two highly-trained Government Officials must both turn their keys at the same time to release the bomb, both Chuck Connors and Reb Brown must be present together for this movie to really work. Interestingly enough, the music by Luigi Ceccarelli is the same as Reb’s Strike Commando (1987). It’s not a soundalike, it’s literally the exact same score. Presumably they figured this movie has Reb, so, why spend the money on all new music? But there’s plenty of shooting, of both the machine gun and the rocket launcher variety, with exploding helicopters as well. Most of the shooting victims seem to be overweight, so perhaps their death is the ultimate diet plan. There are other sweaty-looking characters that have strange beards or resemble Jon Lovitz.

We here at Comeuppance Reviews often talk about how you rarely see misspellings in movie credits. It would be weird if you went to see a movie in the theater and in huge letters on the silver screen it stated the star was “Tim Cruise” or “Bruce Wallis”. Well, we’re proud to announce that Last Flight To Hell does not have a credit for who wrote the screenplay. It does, however, have a credit for who wrote the sceenplay. It’s none other than Tom Carp, of course. (Actually Tito Carpi). The fact aside that Last Flight has one of the greatest sceenplays ever written, we can assume it is to date the only sceenplay ever written. This is perhaps even better than Dale “Appollo” Cook in the misspelled movie credits department. You gotta love it.

Thanks to AIP for putting this out. It’s certainly not perfect, but it definitely has its moments. And it further solidifies Reb Brown as perhaps the ultimate underrated action star of the 1980’s.

I missed out on scoring the Japanese VHS of this by moments not so long ago! Really want to see some more Reb. I know nothing can be as good as Strike Commando, but just as with Hell on the Battleground is the runner-up to Ted Prior's Deadly Prey, this looks like it's the runner up to Reb's Strike Commando.

You're absolutely right, this is very similar to Strike Commando, but not as good.

Thankfully Reb does some of his classic yelling though! Haha.

Thanks! Happy you enjoyed the review. Chuck Connors is always fun to watch.

Another Chuck Connors film to look out for is Terror Squad.

We have seen that and there's a review coming soon. We will post it on June 1st.

Oh cool! Chuck Connors sure was in alot of hilariously over-the-top action films, out of all his films, Skinheads was the most ridiculous.

Will have to check that one out! Thanks for the recommendation. He was also in the very silly Summer Camp Nightmare.