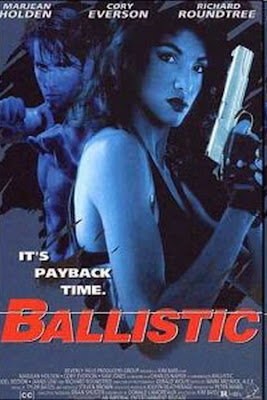 “Maybe you should try Nintendo!”- Claudia


Jesse Gavin (Holden) is a tough female cop who is highly effective and dedicated. She works for an elite squad known as UCT to take down all the slime on the seamy side of Hollywood. As if this wasn’t enough, she has to deal with sexism on the force, not the least of which comes from associate Woo (Lew) and his buddies. Her Captain, Underwood (Napier) is sympathetic, especially because her father, Harold (Roundtree) was framed and put in prison for twenty years.

It seems the source of most of her - as well as the city’s - misery comes from one man, the arrogant, smarmy jerkface known as Nick Braden (Jones). Braden is a “businessman” who has his fingers in every illegal activity you can name. He even sends out his girlfriend, Claudia (Everson) to enforce for him (keep in mind she’s more muscular than most men). Not only that, he stages illegal Punchfighting matches for the amusement of him and his buddies, using Quint (White) as one of his preferred fighters. When Jesse is blamed for some of Braden’s bad deeds, she teams up with the people she trusts most to bring him down. Will she succeed?

Ballistic is classic 90’s video-store action through and through. It has a solid B-movie cast of familiar names, and even tries to put a “sexy” spin on things that would make it right at home on the Cinemax of the day. It has all the action and cliches ("It’s an election year!", etc.) we know and love. Sure, it has some awkward dialogue and a few awkwardly-staged fight scenes, but so what? That’s to be expected and we’re not interested in perfection. Plus it was director Bass’ first feature film. 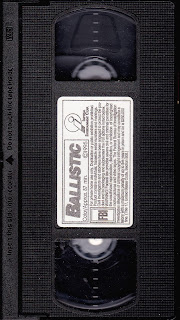 James Lew gave a lot to the action movie of the 90’s, and here he is again, this time sporting an impressive ponytail. Richard Roundtree is in prison again, just like in Bloodfist 3 (1992). His role as Jesse’s father is one of the better ones in the movie. Charles Napier does a quasi-sit-down role as the Captain. Sam Jones puts in his second-most evil performance (next to In Gold We Trust, how could he ever top that?). Robert Miano is in pretty much everything and here he appears in a small role as one of Braden’s buddies.

Cory Everson almost steals the movie as Claudia, putting in a muscular and well-defined performance (yuk yuk). As for the star of the show, Marjean Holden, she could have been the Pam Grier of the 90’s. Or the action movie Halle Berry. She carries the movie well and makes a good hero. It was great seeing her go rogue, and she should have done more work like this. But the real star of the show is the green, angry-looking punching bag with its arms out ready to attack you. “Punchy”, as he is no doubt nicknamed, deserved a bigger and better career. 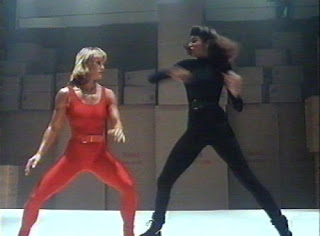 It was nice to see some surprise Punchfighting, we weren’t expecting that. Braden is so evil, he doesn’t even invite a “select clientele” to view the fighting, it’s just himself and a few of his friends. Also he has a license plate that says “BRADEN”. In case there was any doubt, that’s how you KNOW he’s evil. It was nice to see Michael Jai White in an early role. Sure, he couldn’t hope to save Universal Soldier: The Return (1999), but here you can truly see his fighting prowess.

In an interesting coincidence, both Holden and Napier starred together in the Punchfighting episode of the TV show Renegade. As for the gunplay, the sounds used and the muzzle flashes are pretty weak and laughable. It looks like toy cap guns. But again, it’s more about the spirit than the technical issues.

As for the tape itself, it was released by Imperial Entertainment. We’re taking an educated guess that it was a fairly limited release, because this tape is rare and not often seen in video stores. The tape we were able to view wasn’t of the best quality, and maybe that’s why.  Perhaps Imperial got gun-shy and tamped down the number of copies they released to stores.

Thankfully, it’s all done with a sense of humor, which makes Ballistic definitely entertaining and watchable.

Yeah this tape is fairly expensive now, so i'm glad I bought the last reasonably priced copy on Amazon.

There really is no reason this should be so expensive though.

Reminds me of rapid fire.

It definitely has some similar elements! Marjean Holden could have been a great direct-to-video action star like Rothrock.

I have noticed that this thing is expensive. I can't figure out why.

It is very odd. It is just another fun 90s action movie. Should be 5 dollars...not 50 dollars or more.