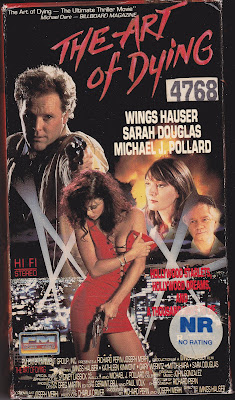 
Jack (Wings) is an L.A. Vice detective who plays by his own rules. Sure, he does what he wants when he wants, but he always helps the teenage runaways who come to town. He develops an especially soft spot for Janet (Warner), a 16 year old girl who has come to Hollywood to be a star. However, something sinister is brewing in tinseltown. A psychotic filmmaker named Roscoe (Werntz) and his assistant, a man by the name of Latin Jerry (Hara) are luring aspiring actors into their studio. They then recreate famous death scenes from movies such as The Deer Hunter (1978), Psycho (1960) and The Texas Chainsaw Massacre (1974), but they do it for real! Roscoe even claims directors like Cimino, DePalma, Scorsese and Hitchcock are just fakes, and he’s the real thing. When Janet gets mixed up in this world - as does Jack's gal-pal Holly (Kinmont) - he goes rogue to take down the nefarious filmmakers. That’s after he’s suspended from the force, of course.  Will anyone actually see THE ART OF DYING?

This is Wings’ third directorial effort, after Coldfire (1990) and Living To Die (1990). And while PM movies are known for showing the seamier side of L.A., here they go all out and portray it at its seamiest - as nothing more than a trap to ensnare young people who don’t know any better into a horrible life, or even death. Wings, as Jack, a man who’s struggling against the tide of filth to help the kids, is his usual charismatic self, and the relationship issues he has with Kinmont allow for some good interplay between them. It’s nice to see Kinmont in a non-Lamas-supporting role. She works very well with Wings who controls this dark thriller (it’s not really an action movie per se) quite well. 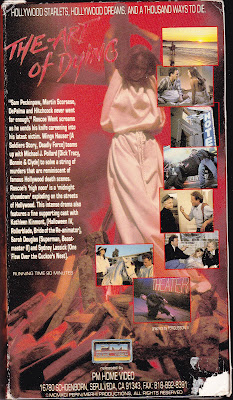 Backing Wings and Kinmont up are a nice cast of supporters: Sarah Douglas of Steele Justice (1987) fame plays Wings’ fellow cop who seems to have a crush on him, Sydney Lassick has a bit part as a roadside cafe owner, and last but not least is Michael J. Pollard, who brings his weird mush-mouthiness and strange affect to the role of some kind of police psychologist named Delbert. It seems to fit.

Seeing as The Art of Dying has a “movie within a movie” theme, as well as its meditations on the concept of the snuff film, while it probably wasn’t influenced too much by Snuff (1976), it does seem to have Michael Powell’s Peeping Tom (1960) in mind. Regardless, TAOD truly was the 8mm (1999) of its day. To relate it back to movies discussed here on this site, the plot is really very similar to King of the Kickboxers (1990), in the idea that it lures unsuspecting actors into their death on film. To add another layer of “meta”, if I may, Wings passes a movie marquee playing the movie Misery (1990). So there’s a lot of layers here.

While the movie can be a tad bit unfocused at times, dealing with bunch of different issues and characters right from the jump, and it moves at what would be considered a slower pace than the kids of today are used to (but who cares about those stupid little punks anyway), it’s all worth it when Wings is suspended from the force by a perfect BYC (Ring of Steel's Brown), and he spends his days at the beach wearing a nice trenchcoat/bathing suit combo with sunglasses, and feeding a rabbit tequila! Isn’t that what you would do if you were kicked off the force?

It wouldn’t be a Wings-directed PM movie without a sax-drenched soundtrack, and The Art of Dying doesn’t disappoint. It underlines the seedy elements at work. This whole movie screams “Cinemax in the 90’s”, what with its overall smutty/sexy/steamy tone or whatever you want to call it. But it has some nice ideas at work, a very good cast, and Wings in top form. To see Wings doing what he does best, check out The Art of Dying.

I heard of this movie! And I think I've seen bits of it too. Whoo hoo!

Excellent Ty. I do like Michael Pollard and I love it when L.A's dangerous and dirty side is on display. AOD sounds incredibly interesting. Will definitely be checking this one out.

You will definitely enjoy it. Wings was great as usual and it has lot of odd and fun moments.