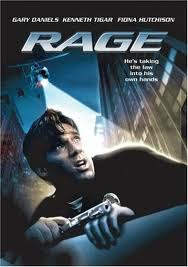 
Alex Thomas Gainer (Daniels) is a second grade teacher beloved by all his students. He also has a great home life with a loving wife and daughter. After leaving the house and saying “I’ll be right back” (never a good sign), Gainer is carjacked and then kidnapped. He is taken to a secret lab trying to manufacture SuperSoldiers. Alex manages to escape and now he is on the run. With corrupt sheriffs, insane scientists, and tons of law enforcement after him, his story becomes a media frenzy. Even though some people died in one of the many melees, no one believes Alex’s innocence - except reporter Johansen (Tigar) and his camerawoman Bobby T (McWhirter). Will Alex be able to clear his good name?

It is impossible not to like Gary Daniels. He tops himself in likability here - as the good natured elementary school teacher and devoted father. PM and other companies must always use him because of this, as well as his stellar martial arts abilities. He’s the perfect action star to root for. Rage is simply one big action set piece after another. It’s truly non-stop stunts, explosions, shooting, and car chases (both Fruit Cart and otherwise).  The angle of the experimental SuperSoldiers makes things a little different, as does the subplot about “media vultures” who convict people in the court of public opinion regardless of their guilt or innocence. 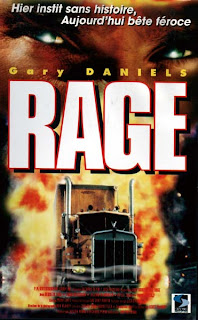 Only PM could include this social satire along with its classic style of blow-ups - and include references to the show Hard Copy, the OJ trial as well as Geraldo - and also include something they often use in their movies - transvestites. It’s not known why. The actor David Powledge almost steals the movie as corrupt sheriff Sherman Kelly.  But sadly he’s not the main baddie. It’s crazy - this guy has been a character actor since the early 80’s but he is virtually unknown. Some people toil in the entertainment industry their whole careers and get little to no recognition, and are great (like Powledge), and some actors are hugely popular but are annoying and talentless. You can name your own example. It’s a cryin’ shame. Take Luis Beckford as Sgt. Beckford in the film. He’s truly an American hero.

But back to the subject at hand, really the only flaw with Rage is that it needed a more prominent and more evil villain. Other than that, the movie is a wildly entertaining ride. The world of PM references itself a few times here:  Last Man Standing’s McWhirter appears as the camerawoman, Alex’s last name, Gainer, is also Erik Estrada’s last name in Night of the Wilding (1990), and in one of Rage’s best scenes, there is a fight at a video store, and the store is decorated with nothing but posters from other PM movies! Now that’s a store we would have loved to have visited. Apparently it was in the Long Beach mall (the whole mall scene is a standout) - although surely the local glassworkers were working overtime after these fights were over.

Also check out more Rage reviews from our comrades in arms, The Video Vacuum and DTVC!

Comeuppance Review by: Brett and Ty
Posted by Ty at 7.5.12

Great review! Can't wait to see what other Daniels flicks get the Comeuppance treatment!

What a coincidence! Daniels is one of our favorites too and this movie is a good example. Looking forward to your take on it.

Thanks. We've got Hawk's Vengeance, City Of Fear and Recoil coming up this week (and next Monday).

Loved Hawk's Vengeance and Recoil, City Of Fear was one of Daniels weaker films though, not much in the way of action and fairly weak acting.

Huge Daniels fan. This is a cracking movie - wish he did a few more with PM. Love the little bits of humour in this.

Venom: We agree with your thoughts on this. Especially City Of Fear...review coming this Friday.

Jack: With the three "R's" (Rage, Recoil and Riot) Daniels showed what he can do, teaming him up with PM was a match made in heaven.