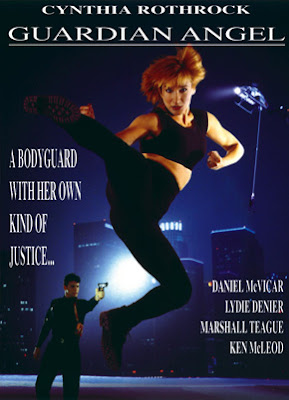 Cop Christine McKay (Rothrock) is hot on the trail of a counterfeiting ring and is working the case with her partner and fiance Nick Taylor (Teague). Behind the operation are the criminals David (Miano) and the super-evil Nina Lindell (Denier). After some tragic events perpetrated by Nina, Christine gets kicked off the force and hits the skids. She ends up living in a trailer with her dog Flash, who she has conversations with about her life. But she vows revenge on the sinister Nina at any cost. Christine ends up taking a bodyguard job for a rich, cocky playboy named Lawton Hobbs (McVicar). Nina was his ex-girlfriend and so there’s a personal stake there. Christine will have to use all her skill as a Martial Artist to get to the bottom of this tangled web. Can she do it?

We really enjoyed this Rothrock vehicle. PM rarely disappoints, and with a team of PM mainstays both in front of and behind the camera, you really can’t lose. Director Munchkin applies the same techniques with Rothrock as he did with Don the Dragon Wilson or Jeff Wincott in the past, and the result is an entertaining movie with plenty of shooting, chases (of the car, helicopter, boat and horse varieties), Martial Arts fights, and Cynthia Rothrock getting off some cute catch phrases after she beats up her assailants. 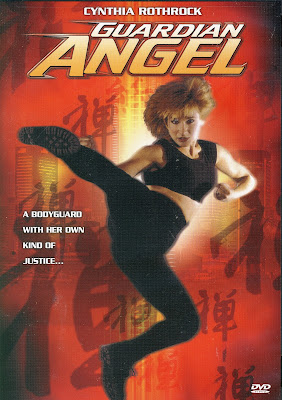 Marshall Teague gets to show off his range - we hadn’t seen him play the charming cop before this. We mainly know him as the evil dojo master/teacher from the great A Dangerous Place (1995). Robert Miano pops up constantly and we know him and love him, he does his standard good job. A nice surprise was Lydie Denier as the baddie-ess. She was cold, heartless, and dastardly, and a perfect enemy for Rothrock. Christine’s Captain in the movie was female but looked and dressed a lot like David Coverdale. And while McVicar did a decent job as the Hugh Hefner-like lothario, we felt Bruce Campbell could have also played that part.

Guardian Angel is also filled with amazingly 90’s-looking people. Some of the fashions and hairstyles are pretty impressive and are worth seeing in their own right. Most of the fight/chase scenes have some wailin’ electric guitar behind them which underlines the fact that PM knows its audience and wants to give them what they want to see: 80’s/90’s action in its most uncut form. We definitely applaud that. But this movie also has some comments about the battle of the sexes and some points of view which keep it from getting overly dumb. Plus, Lawton Hobbs (nice name) predates Muammar Qaddafi by many years in initiating the idea of a female bodyguard. Finally, we noticed in the credits that the fight choreographer was Richard Norton. Too bad he couldn’t have appeared in the film, even if it was just a cameo.

In the end, there’s very little NOT to like about Guardian Angel. Cynthia Rothrock is one of our favorite action stars, and here she’s backed up by a competent team. You gotta love it.

Also check out reviews from our buddies, Cool Target, The Video Vacuum, and DTVC!

Happy you agree! It was a ton of fun to watch.

"PM rarely disappoints" amen brother! this is an ace flick, one of my favourites of Rothrock's.

Yeah, definitely! This is one of Cynthia's best.

Great review. A solid flick through and through. It's no Undefeatable, but what could be, right?

Thanks! It is really hard to beat Undefeatable. "I've enrolled you all in College!"