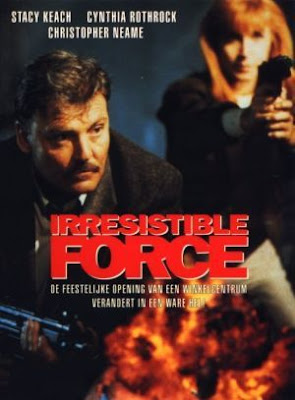 Harris Stone (Keach) is a Police Detective who has put in 23 years on the force and is close to retirement. He’s always getting himself into dangerous situations, so after he reads that female partners are less likely to get into shooting incidents and aren’t risk-takers, he requests one from Commander Toole (Winfield) and he agrees. Even though she was one credit shy from graduating from the academy, Stone meets with Charlotte Heller (Rothrock) and they seem to hit it off. As it turns out, Heller was one of the only female Navy SEALS and is a bad-ass Martial Arts master. This unlikely team, described by one of their fellow officers as “she’s a hot dog and he’s way past his prime!”, get put to the ultimate test when baddie Barron (Neame) shuts down the newly-built mall and holds the people inside hostage - which just happen to include Governors, Senators, and other important lawmakers who were there for the ribbon cutting ceremony. Meanwhile, local punk kid Jesse Delvechio (Bacall) was kidnapped by Barron’s men, and on top of everything else, Stone and Heller have to find out why, and save the kid. Will this unorthodox duo succeed?

Irresistible Force was originally produced for CBS for a potential TV run. It’s truly a shame it never took off - Cynthia Rothrock could have become a household name. Plus it would have been cool to see what other adventures Stacy Keach and Rothrock get up to on a weekly basis. What a missed opportunity. But if you’re rolling your eyes thinking this is just a boring, watered-down TV slog, unroll them. This brief 77-minute excursion is very enjoyable and entertaining. There are a few downright awesome moments and it has snappy dialogue and a nice pace. Plus it has all the fun cliches we know and enjoy. From the first minute of the movie when Jesse is playing his Game Boy, it’s easy to like Irresistible Force. 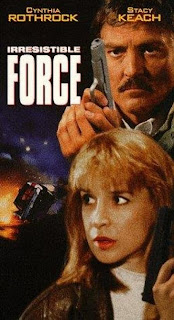 The fact that this is a “DieHardInA” movie is a double-edged sword. On the one hand, because it’s Die Hard in a mall (just filling in the blank), it can join the proud 1990’s pantheon of DieHardInA movies that were such staples of the video stores of the day. Hotels (Crackerjack, 1994), water treatment plants (Lethal Tender, 1997) and so many other seemingly innocent locations were turned into areas of terror by baddies the world over, seemingly inspired by Hans Gruber. Here it just happens to be a mall. On the other hand, it seems a bit confining, especially for a pilot episode, or whatever this was. The parts before Heller is trapped in the mall were better and less claustrophobic. Again, it would have been nice to see other non-trapped-in-a-mall adventures the two of them could have gone on. 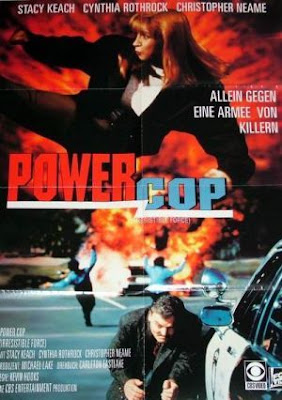 Plus, if it’s in a mall, that allows for Cynthia Rothrock to take advantage of the situation, pioneering “Pan-fighting” after confronting some baddies in a housewares store and beating them up with frying pans. Ideas like this go a long way, and the only possible complaint you could have about the movie is that, perhaps if it WASN’T a TV movie, and was allowed to be darker and more adult, it might appeal to die-hard (no pun intended) action fans more. But that’s kind of missing the point. Rothrock’s Martial Arts skill is as good as ever, and though there is a pretty annoying punk kid involved, he’s not that bad, especially compared to the pain of Esteban Powell. Both the leads are likable and seem to have good chemistry.

It could have - and should have - been the new Martial Law or Nash Bridges. Sadly, it was not to be, but if more TV shows were like this, the world would be a better place.

Sounds pretty cool, I really enjoyed Point Blank, so i'm definitely up for another "Die-Hard-In-A-Mall" film.

It is pretty good. We know you will like it! Keach and Rothrock make a really good team.

You should consider covering some of her Hong Kong stuff.