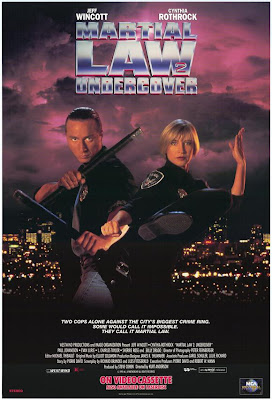 Cops Sean “Martial Law” Thompson (Wincott) and Billie Blake (Rothrock) are back in this sequel which is a quantum leap ahead of its lackluster predecessor.

When one of their fellow officers ends up dead, the trail leads to a popular nightclub run by the smarmy Spencer Hamilton (Johansson). His muscle includes meathead Tanner (Lurie) and other sidekick Bree (Rose). To get closer to the truth, Billie goes undercover as a bartender. Naturally, all manner of illegal doings are emanating from the club, not least of which is high-stakes, underground Punchfighting. But why is Captain Krantz (Drago) so touchy about this subject? It’s now up to Sean and Billie to take out the trash.

As stated earlier, this installment in the Martial Law trilogy is far superior to Martial Law one. The colors are brighter, it has a more professional sheen to it, and not only do the main stars Wincott and Rothrock really shine, it has a solid supporting cast featuring Billy Drago, Evan Lurie, Sherrie Rose, Max Thayer and Nicholas Hill in a small role.

The decision to replace Chad McQueen with Jeff Wincott was an inspired choice. Wincott is a lot more charming, and has Martial Arts skill to spare, and we just love his energetic style. As in the follow-up to this film, Mission of Justice (1992), Wincott gets to do some stick-fighting along with his traditional vigorous style. Seeing as he resembles - in this film at least - Matthew McConaughey, rather than being a laid-back “surfer dude” who’s just "livin’ life, and lovin' life", he’s breaking the arms and knee joints of baddies. 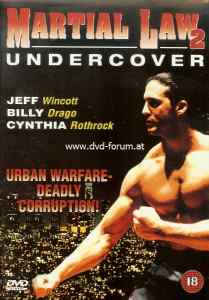 Evan Lurie, Slash Gallagher himself, lumbers into view in an extra-meatheady performance. He has strange speech patterns in this movie. He sounds like Stallone on half speed. But his clothing choices are pretty...well...choice. It’s odd seeing Billy Drago as a police captain, as he looks like an emaciated gargoyle, but you’ll see why he was cast in the role. Hopefully these descriptions don’t come off as too crass, we love these actors and we’ve seen them so many times, they’re like our friends.

But the main reason to watch Martial Law 2 are its quality fight scenes. It has the fights you want from the stars you like. That could almost be a tagline. Wincott and Rothrock get off some great moves, and what’s cool about their scenes, is that you can see they are really doing the moves - as you all know, the way to see if a actor/Martial Artist is genuine is to see how many moves they do without a cut. For example, in some of the best Shaw Brothers movies, there are anywhere from 8-12 or more moves with no cut and it’s extremely impressive. Wincott and Rothrock can also achieve this level of prowess, and it’s a lot of fun to watch.

And while there is a lack of Wincott in the middle of the film, and it would have been nice to see a much longer fight scene between Rothrock and Sherrie Rose, this is a classic early-90’s “abandoned warehouse” actioner with a lot to offer.

NOTE: Fascinatingly, there is an introduction on the U.S. VHS tape with Cynthia Rothrock advertising some of her movies. That’s a really cool feature on the tape.

Great review! One of my favorite low budget action movies.

Thanks!We are happy you enjoyed it too. Rothrock and Wincott made a good team.

Love this movie..Wincott is awesome..at one point I tracked all films I could find with him, and most of his movies are great. I should revisit some of them...great review, finally a film I can comment on ,lol..keep it up guys!!!

This is an action classic. Jeff Wincott rules. Got to re-watch Martial Outlaw soon.

Yeah, you should also check out Open Fire, which was a pretty good Die-Hard clone.

You're right, that was a decent Die Hard clone. Gotta love Wincott!

Awesome about Expendables 2! Going to see it Monday.

I've had this on tape AND DVD for so long, yet still never watched it.. and now you tell me Max Thayer is in it! I so have to sit down to this...

You are going to love this! Max Thayer has a nice role in this too.