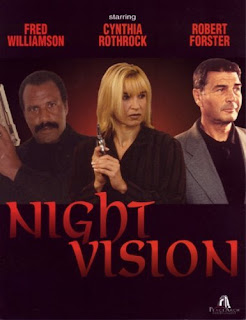 When a sadistic serial killer starts stalking the streets of Dallas, Texas, only one man can stop the madness: Dakota “Dak” Smith (Williamson). But before he can fight this antagonist, he must fight his inner demons: he’s been living in a sober house and going to AA meetings. His alcoholism even got him demoted from detective to motorcycle cop working the graveyard shift. But his Commanding Officer, Teak Taylor (Forster) believes in him, so Teak teams Dak up with the enthusiastic Kristin O’Connor (Rothrock). Despite his initial misgivings, they forge a solid relationship. Dak’s buddy Newt (Bushwick Bill) also is supportive. Can Dak turn his life around and catch The Video Stalker (Prentiss) - so named because he videotapes all his murders - at the same time?

The presence and charisma of Fred Williamson completely carries this movie. In his first go as the recurring character Dakota Smith (later to be reprised in On the Edge 2002, among others), Fred gains your sympathy as the hard-working guy who loves Twinkies and root beer. Inexplicably, there are multiple scenes where he appears pantsless, but maybe that was to underline his slide from hero detective to living on the skids - the media even gives him the nickname “The Skid Row Cop”. He even gets his own, ultra-catchy theme song, “Dakota Smith - You’re 12 Steps Away”, which was co-written by music legend Andre Williams of all people (assuming it’s the same Andre Williams whose career goes back to the 50’s). 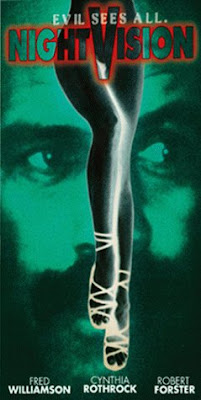 We all love Cynthia Rothrock, and we were definitely happy to see her here, but she seems miscast as O’Connor. Her martial arts talents are severely underused. This part could have been played by many people - this movie doesn’t highlight her particular talents and abilities. Even still, it was nice to see her alongside Fred and Robert Forster (whose part is pretty minimal but still does a competent job). Bushwick Bill, of Geto Boys fame, basically steals the movie as Newt. You really like Newt and Bushwick does a great job.

The great cast notwithstanding, this is still late-90’s DTV crud. It’s ultra-low budget, and the mixture of simplistic plot - a cop drama/serial killer chase - means it gets a bit slow at times. It really seems like it could have been made in the 80’s, thanks mainly to the cast. It was directed by Gil Bettman, the same man who directed Never Too Young To Die (1986). How far the mighty have fallen. What would Stargrove think?

The DVD contains the trailer, which we would advise watching after the movie because it gives away pretty much everything. That’s why we always watch the trailer after the movie. In order to hook the potential viewer in, they have to give away all the best parts. Too many spoilers.

In sum, the cast is strong but the movie itself is not. So it’s kind of a wash, but Fred and Rothrock fans still might find this entry worthwhile, if not ideal.

PRetty decent film, interestingly enough, Williamson played Dakota Smith in three other films- "On The Edge" "Down And Dirty" and "The Rage Within" though they don't have any relation with one another.

Agreed. This was decent.

On The Edge wasn't too bad.

Cool! Thanks for the link. Will have to purchase that soon.