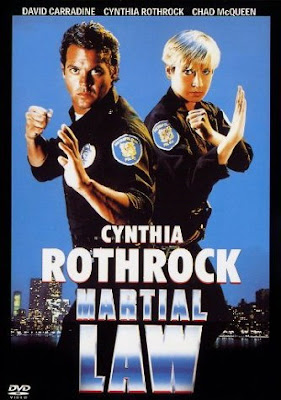 Dalton Rhodes (Carradine) is the leader of a large and growing criminal syndicate. Cop Sean “Martial Law” Thompson and his fellow police officer/girlfriend Billie Blake (Rothrock) are trying to shut him and his cohorts down. When Martial Law’s brother Mike falls under the spell of Rhodes, it becomes personal.

As far as plot is concerned, it gets off to a slow start and then continues on at an odd pace, like an athlete that begins sluggishly and because of that, can’t maintain his momentum or “get his groove back”. Martial Law is unfocused and you don’t really know what’s going on at any time in any clear, defined way. The elements are certainly there, but it doesn’t pull together. Seeing as Chad McQueen (yes, Skylord Harris himself) is an emotionless lunkhead, it pretty much falls on the shoulders of the always-great Cynthia Rothrock to carry the movie. But she’s in a supporting role, criminally playing second-banana to a man with a wardrobe filled with silly shirts. Although, to be fair, he does have a cool, fur-lined coat he wears during the day in L.A. and has a rockin’ motorcycle.

It’s nice to see David Carradine as Rhodes, the classic baddie, looking dapper in his suits. Of course, more than simply an evil businessman, Rhodes knows the “forbidden” Martial Arts Technique “Dim Mak”, or Touch Of Death. Never before has there been such a disparity between attempts at realism during the dialogue scenes, and utter silliness during the fight scenes. Martial Law (the movie, not the clunky, overly-long nickname) could have used some car chases and blow-ups to liven things up. The movie lacked a certain fun element that really should have been there. We blame Skylord Harris, and this is one of his BETTER movies.

When he first appears on screen driving up in his Dominos Pizza car and in full Dominos regalia to trick a baddie, our initial thought was, “that seems about right”. He seems well suited for that kind of work. And while Benny The Jet Uriquidez appears briefly, as does his famous training center (also seen in Death Match, 1994), and the final fight scene is cool, as is a short training sequence, it’s too little too late.

About the music, there’s a scene in a club where 80’s hair metal band Tempest plays, and the score by Elliot Solomon is lively and amusing, but not memorable. But there’s plenty of classic sax to go ‘round. But seeing as the VHS released in the U.S. is in EP speed, both the sound and picture leave something to be desired.

While this first installment in the Martial Law trilogy (the third one is Mission of Justice, 1992) is largely mediocre, this would be rectified in the sequels. Starting with Martial Law 2: Undercover, things improve hugely. Luckily this franchise got a chance to grow - but we don’t know why. WHY are there two sequels? Were audiences clamoring for more Sean “Martial Law” Thompson? How did this come about? But, fortunately he does return later - as Jeff Wincott. So start at part 2, unless you are a Cynthia Rothrock die-hard.

Been wanting to see this one, but it sounds so awful. I am a Cynthia devotee though so....
I'm sure you didn't mean it to come across as such, but you effectively compared Cynthia's 'value' to that of a motorcycle and fur-lined coat.

We didn't mean that at all! Haha...just comparing how Cynthia is better than Chad.

If you enjoy Cynthia, it is still worth-watching.

I liked this, back in the 90s...also the sequels...it may not be a film of the highest order, but sometimes its enough..and the dim-makking Carradine is burned into my mind forever...

We agree. Sometimes all a movie needs is a memorable Carradine.

This one was decent, I don't mind McQueen, he was pretty good in Firepower, Fall:The Price Of Silence, and New York Cop. Interestingly enough, Jeff Wincott was also in the excellent Martial Outlaw, which despite the title is completely unrelated to the Martial Law series.

Definitely agree he wasn't that bad in Firepower (Review coming soon) Saw Martial Outlaw a few years ago and it was really good. Have to get a copy!

This wasn't a "bad" movie - just a little disappointing. Carradine was great, Rothrock and Tan were good, but McQueen was mediocre - and that's if you don't compare him to Steve (in which case - shameful).

I must admit I have a nostalgic soft spot for this type of movie, filmed in this era, and was entertained for 90 minutes.

My biggest gripe is not the acting or the plot, but the sync on the FX. All the impact noise was always just before the actual impact??? Oh well...

Rothrock was great in this. She was weighed down by McQueen. Thankfully the sequel was way better.