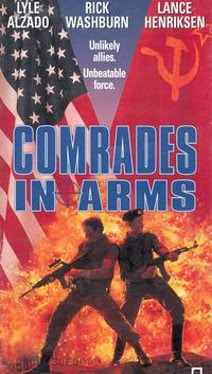 
Khaleel (Weiner) is a terrorist, drug trafficker, and America-hater that’s causing so much trouble, CIA director Reed (Henriksen), and his Russian associates decide that taking him down is going to take the teamwork of the U.S. and the Russians. Recruited to execute the mission is Delta Force Commanding Officer Frank “Bone” White (Ingvordsen). Naturally, he’s a cool dude with a bad attitude. His Russian counterpart is Spetsnaz officer Kotshov (Kaman). He’s a ruthless, “Kill ‘em All” type. But, for the good of both their countries, they must learn to get along and trust each other. With tensions rising, will they be able to take down Khaleel - before they kill each other first?

Comrades In Arms is a military shoot-em-up with a pretty serious tone. It starts off with some hi-tech (for the time) green night vision and “thermo” vision (as in, when a character says, “we’re switchin’ to thermo!”), and plenty of technical combat lingo. Even though the concept of the U.S. and the Russians working together may remind you of Red Heat (1988), or maybe even Red Scorpion (1988), or possibly some other “Red” movies, the idea that, at this point in time, that they would both have to go into the field of combat together and rely on each other, is pretty forward-thinking. This is a war movie for a new kind of war - the war on terror - with all the technology that would entail, and Comrades In Arms probably will receive little to no credit for being one of the first (maybe the first?) movie to deal with this kind of war in the modern age.

But it still carries over some much-loved cliches from the past, seeing as how the Russians are gruff and emotionless, and Frank White (presumably not the same Frank White from King of New York  from two years earlier), is called a “loose cannon” by his superiors. And it just wouldn’t be complete without the climax in an abandoned warehouse. Similar to how Robert Z’Dar in The Final Sanction (1990) played a Russian, here Lyle Alzado does the same. Despite the fact that Alzado is top-billed, he’s only in it for a scant few minutes. Remember, back in the 80’s, Alzado was a name. A movie about cold war ideals with Lyle Alzado is certainly a product of its time, but as said earlier, it’s more forward-thinking than you might think.

Steven Kaman co-wrote, co-produced, co-stars, and shot the movie, and probably had a grand old time with Ingvordsen, as they seemed to have given themselves the two leads in the movie. Kaman is responsible for utter dreck like Soul Of The Avenger (1997) and Total Force (1997), so luckily he did not direct this movie. Lance Henriksen gives gravity to his relatively small role, and he brightens the film. Keep in mind a big portion of this movie is mindless shooting, with plenty of machine guns and rocket launchers. So there is a bit of filler. Also it should be noted that Bone has a team of equally coolly-nicknamed warriors: Top Kick, Spook Show, Thor, Bigfoot, Ironman and Cowboy.  They’re fighting Khaleel and his guys in Colombia, and some of this may remind you of Delta Force 2 (1990). As far as John Weiner is concerned, who plays Khaleel, he does a great job of being evil. We don’t know much about him, except for the fact that he was in Cyber Vengeance (1997). We’ll have to keep an eye out for him.

In all, Comrades In Arms is a reasonably good way to spend 90 minutes.

Another good review from you guys. I've actually been a fan of Ingvordsen myself for a while and have some of his films on VHS as well as DVD/DVD-R.

Thanks! That's great you're a fan too. Comrades In Arms and The Outfit are his strongest in our opinion. What are your favorites?

Never heard of this movie before. But you got me on board with Lyle Alzado, even for a few minutes.

I agree with the "rely on each other in the field of combat" line. I think that this movie concept was very popular during the last years of the cold war, as you also stated with Red Heat, Red Scorpion (fuckin A') and Iron Eagle II if i am not mistaken.

Lyle Alzado is always entertaining. Wished he was in this more. Looking forward to your opinion.

I will put it on my "track-it-down-list". Somewhere, somehow someone (me) is gonna buy this.

Alzado was always fun to watch. Now I have to seek this one out.

Snake and Doug: Make sure you find the right copy (Snake) and you don't pay too much for it. Alzado got more time in the sun with Destroyer (an upcoming review).

Got some older Ingvordsen-Films: Mob War, Hangmen, Search and destroy and this one. In Germany called "Black Berets".

Black Berets is a cool title. We reviewed Search and Destroy, The Outfit, and Cyber Vengeance. We haven't seen the ones you mentioned, we'll keep an eye out.

No Ingvordsen but do you know:
Vigilante force (Kristoffersdon, J.M.Vincent)
and
Let's get Harry (Harmon, Duvall, Busey)?

That is an impressive collection. As far as Vigilante Force and Let's Get Harry, we haven't seen those but we are on the lookout.

As for Covert Action, it's in our pile of movies to watch.

Sorry if this is late, but some of my favorites from Chris include The Outfit, Mob War, Covert Action, Backfire!, Comrades in Arms, Firehouse, Shock Troop, Absolute Aggression, The Little Patriot, just to name a few.

No problem, post any comment you want, when you want...no time limit. The Outfit is pretty good, will be watching Ingvordsen's Covert Action soon.