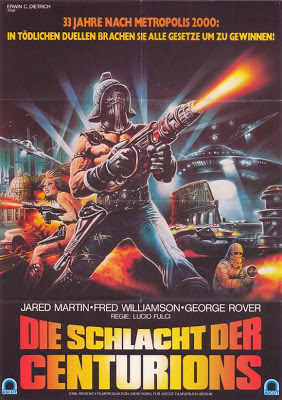 
In the future, two TV networks, Seven Seas and WBS (World Broadcasting System) are vying for ever higher ratings. Seven Seas’ hottest show is “Killbike”, where, you guessed it, dudes on strange looking, tricked-out motorcycles beat, slay and decapitate each other, assuming one of them doesn’t blow up in the process. WBS’ competition to that is “The Danger Game”, in which contestants think they are facing scary and gruesome situations, but it’s all a carefully manufactured hallucination. However, Station Manager Of the Future Cortez (Cassinelli) wants to trump his rivals once and for all, and, because he’s based in Rome, decides on a fight-to-the-death biker romp in the coliseum featuring death row criminals sentenced to die, calling it “The Battle of the Damned”. (Noteworthy cons include Williamson as Abdul and Cliver as Kirk). But, despite their cynicism, in order for this to be a ratings bonanza, they still need a hero. And in order to get a hero, he has to be on death row. So popular good guy Drake (Martin) is framed for his wife’s death. With all the pieces seemingly in place, only Drake - perhaps with the help of Sarah (Brigliadori) - can stop the madness and end the ratings wars for good. But can he survive?

Not since the late night wars of the early 90’s has TV competition been this fierce...say what you want about The New Gladiators, the movie was definitely ahead of its time. It predated the proliferation of reality shows, especially the ones that feed off your fear, such as Fear Factor. (That’s all “The Danger Game” really is). It predicted the ever-more-vicious competition between networks that leads to the lowest common denominator being aired. It predicted companies conglomerated only in the hands of a few huge concerns. It even predicted reality shows such as “Full Metal Jousting”. In the movie world, ideas and concepts included in this movie predate Robocop (1987), The Running Man (1987), Strange Days (1995), and Fatal Combat (1995). It even predicted GPS, especially having it on a bracelet you cannot take off, just as criminals have today.  All that being said, Rollerball (1975) and Blade Runner (1982) seem to be the major influences. Jared Martin even resembles James Caan. But Fulci and his team deserve a lot of credit for being so forward thinking. 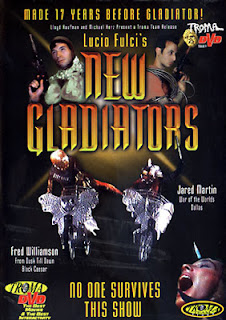 Of course, this is Fulci’s entry in the Italian post-apocalyptic sweepstakes (technically we don’t know if an apocalypse happened this time around, so let’s just say “futuristic”). It has the touches of gore Fulci is synonymous with, but there are plenty of impressive stunts as well, especially the motorbike extravaganzas. Working on a low budget, it’s pretty evident all the capital in this movie is conceptual and idea-based, not so much budgetary. But, as ever, the Italians are wizards at getting the most out of a little, and the sets look amazing, the outfits and cycles impressively decked out, and we’d rather see meticulously-built miniatures than gag-inducing CGI any day of the week. And what would a movie of this era be like without the sax on the soundtrack and the prerequisite torture scene? So everything is present and accounted for, and Fulci makes it all work. 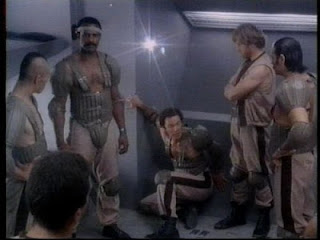 There’s so much we didn’t even mention, like the mysterious network boss “Sam”, an evil dude named Raven (Ross) who is part of a “Pretorian guard”, and on and on. Even the ultra-modern furniture is at least a little interesting. Needless to say, the presence of Fred Williamson livens things up, and he has an impressive cast to back him that fans of Italian genre cinema will certainly recognize. Not to be outdone, the movie even predates seizure-inducing strobe effects that wouldn’t hit big until Pokemon. We applaud Fulci and the gang for approaching this subject matter differently than his peers. It’s not just a bunch of cars crashing in the Italian countryside, there are actually some interesting ideas going on here. But any viewer could miss them if they’re not paying attention.

Because of the typically lame Troma DVD, Fulci will yet again not get the credit he deserves for making ingeniously put together, even thought-provoking movies. But we’re pretty sure you’ll have a wheelie-poppin’ good time when you watch The New Gladiators.

German VHS-Cover. "Centurions" and "Metropolis 2000" are in my collection. Best Italy-Trash (and i love Fred Williamson).

Atother great Italian movie. The Hammer's movies are always worth watching. The future looked much better in the eighties.

Harry: Nice! I bet you have an amazing VHS collection.

Roger: Haha true. The 80s were better. We should have cars that shoot lasers now. What's taking so long?

This movie didn't do anything for me at all, and it's not because I can't handle my italian action, it just didn't reach even nearly the same greatness as Bronx Warriors or New Barbarians. Of course, when I saw it, it was the end of a 6 movie moviethon..

We liked it. You probably Italian-Post-Apocalyptic-ed out.