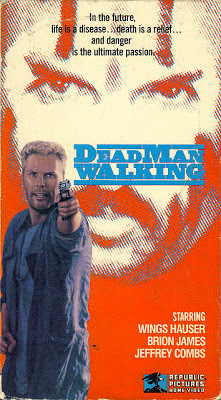 In the far distant future of 1997, the world is a post-apocalyptic wasteland (yes, another one). Many survivors have a deadly plague and their quarantined area is known as “The Plague Zone”. When super-evil baddie Decker (James) and his minions, including Snake (Richardson) kidnap the daughter of a wealthy businessman, his chauffeur, Chaz (Combs) goes into the plague zone to try and rescue her. But he brings along a mercenary, Luger (Hauser) to help him. The devil-may-care Luger and the skittish, nerdy Chaz are the original odd couple - but will they use their combined mixture of brains and street-smarts to outwit the baddies, rescue the girl and defeat Decker once and for all?

Mix Neon City (1991), Maniac Warriors (1988), and Omega Cop (1990) with the news reports inspired by Robocop (1987) and the “wacky”, “futuristic” set design in the vein of Shredder Orpheus (1990) (especially prevalent in the “Cafe Death” scene) and that should give you some idea of where we are here. Brion James stands out as an especially psychopathic bad guy, whose “evil clown” appearance makes him even scarier. Wings has shorter hair than usual, and plays a game we can only describe as “Chainsaw Chicken” while listening to jazz music. Apparently this is what goes on in the future. But the closest companion of all to this movie might be Nightmare at Noon (1988), which also featured Wings and Brion James, and it shares other similarities as well. But Nightmare at Noon is better.

Sadly, Dead Man Walking seems like it’s missing something. It’s hard to say what it is, perhaps some kind of verve or energy. As stated earlier, it’s an overdone idea, and something would be necessary to make it stand out from the pack. The real problem is that there’s not nearly enough action. This can barely qualify as an action movie. As it stands, this movie is okay, standard fare, but you’d think the cast would elevate the dull material and unfortunately that does not happen.

Clearly Tim Robbins is either a thief or just ignorant as evidenced by his 1995 movie of the same name. Perhaps the only good that the 1988 Dead Man Walking has done in the world is confuse video store patrons looking for the Susan Sarandon vehicle, only to accidentally rent this one instead. We’d love to see the look on their faces.

Also check out a review by Wings Superfan, DTVC!

I just watched this one and enjoyed it. I'd probably give it 3 stars myself, it was just so strange! And Combs is always good value.

Happy you enjoyed it. Hauser and Combs were solid as usual.