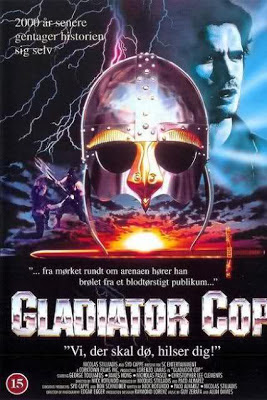 
Andrew Garrett is back! Who’s Andrew Garrett? And why is he back? Apparently he’s the Canadian cop played by Lorenzo Lamas who first appeared in The Swordsman (1992). This time around, Andrew is trying to get to the bottom of a missing museum piece, a sword said to have belonged to Alexander the Great. Diabolical museum director - and how often do you get a chance to hear that description of a human being - Chris Kilos (George Touliatos - or is it George Touliatos as Chris Kilos; not really sure) has the sword and does what any rational person would do if they had Alexander the Great’s sword - he gives it to a hulking meathead named Jodar (Clements) so he can win in illegal underground fighting matches that take place in parking lots.

But when the mysterious fight promoter Parmenion (Hong) enters rival meathead Mongol (Robbins) into the competition, things really heat up because Andrew Garrett must now go undercover and fight him. Also there’s some mumbo-jumbo about how Parmenion and Garrett are reincarnated from past historical figures and Garrett dreams about their historical encounters. What will happen to Jodar and Mongol? Oh yeah, and Andrew Garrett? Find out today, if you can...

The original Night at the Museum (2006), Gladiator Cop - not to be confused with Karate Cop (1991) or Samurai Cop (1989) - is one of those “30% New Footage!” deals, a completely incoherent mishmash of recycled footage from the first movie, cobbled together with some new footage and perhaps some stuff left on the cutting room floor. Odds are it was left on the cutting room floor for a reason, and rehashing and microwaving the blended contents doesn’t necessarily make what you’d call a cohesive film. At least not in the traditional sense of what we’ve come to know that to mean.

Perhaps the biggest question as to the existence of this thing called GLADIATOR COP: THE SWORDSMAN 2 (which in itself is a pretty big red flag) is...WHY? Was The Swordsman such a huge hit that it demanded a sequel three years later? That all seems weird by today’s standards, but it’s crucial to remember that things were very different in the video store era. People were more willing to take chances. It was probably inexpensive to create this movie, slap a name like Lamas on the box cover, and you might just get a return on a relatively meager investment, what with video stores in full effect around the world. But what exactly is going on? 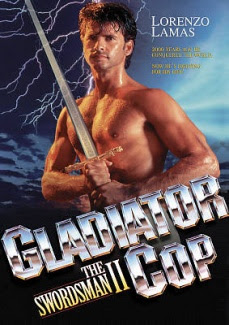 Evidently the character of the museum director, Chris Kilos, was in the first Swordsman film...and the filmmakers this time around thought, “You know what, let’s tell the continuing story of the museum director. Fans are definitely going to want that.” Then we get to some Lionheart (1990)-inspired parking lot fights, where characters such as Mongol have cartoonishly huge swords and axes. His freakin’ sword is longer than his body height.

Other fighters have Raphael-style sais or those small crescent weapons on a straight handle. We also get treated to “throwing star vision” so we can know what it would feel like to be flung by, and at, a meathead.

The fights are announced by an Ernest Borgnine lookalike who speaks not into a microphone, but a small plastic megaphone attached to a rope. His announcements have that fast food drive-thru unintelligible static so you can’t tell what the poor man is saying. But Lamas’ hair remains wildly awesome. So that straightens things out. Much like Lamas might do with his hair.

It seems this movie is fairly comfortable with its incoherence, unlike the first film, which at least tried to be coherent. But this movie is far sillier, which in our book might just make it the superior piece of entertainment, but if the movie had more Lamas (he’s gone for long stretches) and was a little more coherent, it might be better and would appeal to more people. So as a viewer you’re not really hooked in, but you’re not really checked out, you’re kind of left floating in the middle (at least during the less silly scenes).

So Gladiator Cop: The Swordsman II qualifies as being Grincoherent (which means incoherent in a good way), a term we coined. But while it is Grincoherent to die-hard video junkies like ourselves, to the majority of the viewing populace it will no doubt be confusing and unsatisfying. It all depends on your tolerance for nonsense.

I personally thought it was great. Not quite Ring of Steel, but it scratched an itch.

The fighting was fun, but it needed more Lamas.

This was mildly less sucky then the first film, though that's not really saying much.

Haha, the lack of Lamas and Hong and overall clunkiness was it's downfall. But the oversized swords were amusing.