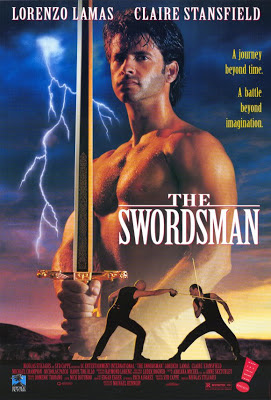 Andrew (Lamas) is a Toronto cop on the edge...the edge of a sword that is (yuk yuk). When archaeologist Julie (Stansfield) witnesses the theft of a sword thought to have belonged to Alexander The Great, not only does Andrew have to protect her, but he has to explore the seedy Canadian underground fencing circuit to find answers. Thankfully, Andrew is an accomplished fencer, so when he meets Stratos (Champion), a man who stages illegal underground fence-fighting tournaments to the death, he doesn’t stand out as a cop. Adding to all this is the prerequisite romance between Andrew and Julie, and the dreams Andrew has been having, which indicate who he may have been in a past life. Will Andrew be able to solve this “Gordian Knot” of complications? Find out today!

In the 90’s, fencing must have been huge, because there’s also Ring Of Steel (1994). Given the choice, we prefer Ring Of Steel to The Swordsman. One of the few things that stand out in this movie is Lorenzo Lamas’ amazing hair. It almost single-hairedly saves the movie. But sadly there’s more padding in this movie than in the fencing outfits of Andrew and Stratos. And at 98 minutes, there’s just too much filler.

Probably the movie’s strongest idea occurs within the framework of the no-rules, 2-men-enter-one-man-leaves fencing duels. It’s primarily a swordfight, but it can end with an MMA-style takedown. That’s interesting. That idea should have been developed more, instead of some of the weaker stuff. Thus, the movie could have used a bit more excitement.

But everything Lamas does is cool - from his awesome fencing bandanna which stylishly protects his lovely hair, to the way he flicks on a lightswitch. Stansfield as his female foil provides the eye candy, and she was also in Best Of The Best 2 (1993) and Sweepers (1998). Director Kennedy is also responsible for Red Scorpion 2 (1994), so make of that what you will. While The Swordsman doesn’t really skimp on the swords, it’s a little on the slow side, making the “flashbacks to another age” - which will remind you of The Minion (1998) and The Order (2001), and of course Highlander (1986) - feel a bit odd. Adding to that is the preponderance of nude and seminude men (more than usual). It would be rather easy to see a gay subtext in this movie (you don’t have to be Freud to see the symbolism of “Swordfighting”...) What were they thinking?

The Swordsman is overlong and underwhelming. But there is a behind-the-scenes featurette on the Republic VHS tape, so be sure and check that out. If you could just see the featurette somewhere, it might save you some time. The Swordsman is really for die-hard Lamas fans only.

This just goes to show that every cop should also be an expert fencer. You never know when your skills will be needed.

This film was a total dog, just deadly dull the whole way through, with poorly done action scenes and a really poor story. It's definitely one of Lamas's worst films, the sequel was mildly more tolerable, though that's not really saying much.

Agreed, this could have been way better. It was a disappointment. Only Lamas was good.