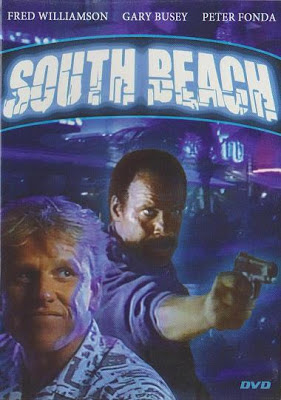 
Mack Derringer (Fred) has an awesome name and used to play football. His partner Lenny is also an ex-pro player and now they’re private eyes in South Beach, Florida. And that, if the movie’s tagline is to be believed, is “the world’s deadliest strip of sand”. Mack’s latest adventure involves his ex-wife, Maxine (Vanity), who now runs “Maxine’s Services”, which seems to be some sort of phone sex operation. When a mysterious voice on the phone who calls himself “Billy” starts making threats, Mack snaps into action. As if his partner Lenny wasn’t enough, Mack calls on the services of Jake (Fonda) to help him find his way through the South Beach underworld. But Det. Coleman (Forster) doesn’t trust Mack and seems to be following his every move. But at least Mack’s mother, Mama (Sanford) is proud of him and doesn’t hesitate to tell anyone who will listen. After getting a tip from a rapper named Too Kool (Ross), Mack gets to the real heavies such as Santiago (Silva) and a man named Billy (Jones) - but is it the same Billy that’s been harassing Maxine? Mack Derringer will have to use all the power of his name to get to the truth behind this web of crime and deception. Can he do it?

If the above plot description sounds like a confusing mishmash, that’s because that’s pretty much what South Beach is. Fred is able to get amazing casts for his movies, and in finding a place for everyone, sometimes forgets about coherency. South Beach also has somewhat of a sillier tone than a lot of other Freds we’ve seen, and the end result, while not bad, is likely to not really satisfy anyone except die-hard fans of anyone involved with the production, and only viewers familiar with Fred’s style of filmmaking will be able to glean anything from this movie. 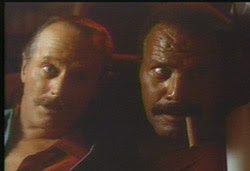 Fred’s array of great jackets is noteworthy, as is he and Busey’s round of what can only be described as “Zany Golf” at the beginning of the film. As in the later Night Vision (1997), Robert Forster plays a cop who yells at Fred. It’s basically the same thing here. There was very minimal Henry Silva - by the time his part in the movie rolled around, he was squeezed out by all the other actors in this broth. And after we were finished pondering why Peter Fonda, as well as his ponytail/mustache combination, were involved in the first place, we got to the rapper Too Kool, not to be confused with Too Short, and another brief Sam Jones appearance. But at least with Jones, there’s a fight, instead of him standing around awkwardly as he does in fellow Fred film Down ‘n Dirty (2001). But all the names in the cast distract from the amazing goons in this movie. We don’t know their names, but we all should. They outshine most of the cast, and they do it in their own lovable way: simply by being humble men, overweight men squeezed into tweed jackets, with mullets and Vuarnet sunglasses. God bless the goons, the unsung heroes of the crime movie world.

As for the DVD we viewed, it’s one of those cheapo gas station jobs and is of very low quality. It’s actually blurry, and we were told in the late 90’s DVD’s would never be blurry. The VHS is of far better quality. However, this particular disc is a double feature with the Mario Van Peebles film South Bronx Heroes (1985), and clearly this DVD company was catering to movie fans just clamoring to complete their “South” movie collections. But, in direct contradiction to that, according to the menu screen, the movie is called “Sonth Bronx Heroes”. You read that right. SONTH. How you screw up the title of the movie on the menu screen of your own DVD, we’ll never know, especially such an easy word like “South”. Either that, or the movie is referring to the heroes of an area of New York City that we’ve never heard of before.

South Beach is kind of a weird outing for Fred, yet also oddly typical of some of his other work. As Survivor once sang when they were surely referring to this movie, “It’s the paradox that drives us all”.

In Europe, this movie is known as Night Caller, and the UK DVD has a blurry picture, too. The movie was too low-key for my taste, however. It could have done with some more action scenes.

Definitely agree with you. Fred needed to add more action, not more talking with Peter Fonda.

He must've been havin money trouble.

Good thing is that he has gotten significantly better with each movie he does!

Do you mean Fred, Gary Or Peter? Haha.