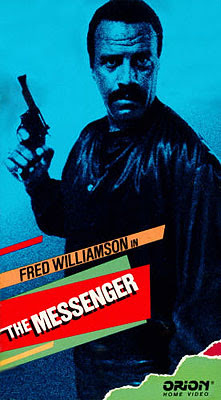 
Jake Sebastian Turner (Fred) is an ex-Green Beret in ‘Nam who became a cat burglar. He was busted in Italy and served three years in an Italian prison. When he gets out, one of his old contacts offers him $500,000 or more if he can exact revenge on the drug dealers that killed his son. He takes the job, meanwhile reconnecting with his old flame Sabrina (Sandy Cummings). When drug-dealing scum kill her, Turner kicks into gear, going from Rome, to Chicago, to L.A. and finally to Las Vegas tracking and killing “drug gangsters” as they are called, but also helping people that have been harmed by them along the way, meeting different people and getting into different scenarios in every city he visits. Police Captain Carter (Mitchell) and his number two man, Leroy (Pierce) are trying to track down this “Messenger of Death”, but FBI Agent Parker (Connelly) is sympathetic to his vigilante ways. Watch Fred become a one-man war on drugs in The Messenger!

Fred Williamson once again proves he’s at the top of his game when it comes to the action stars of the 70’s and 80’s. He starred, co-wrote, co-produced and directed this film, and, thanks to his Fred-Fu, was probably Martial Arts coordinator as well. The film might have an odd pace, but it’s Fred’s unique vision that makes it good. Thanks to some of the politically incorrect elements, as well as the ultra-funky score and musical stings (by William Stuckey), you couldn’t make this today. And because, at the time of this writing, it has not been released on DVD, this VHS-only Fred is a true artifact of the time. He also passes a movie marquee showing Raw Deal (1986), and we always like to see these kinds of preservations on film. 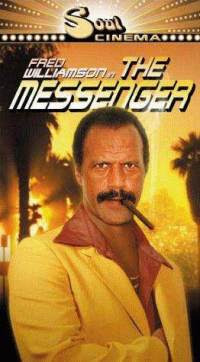 As if the strong presence of Fred doing his “Death Wish thing” as has been said, wasn’t enough, he assembled a killer cast: Cam Mitchell plays the angry Police Captain (basically the exact role he plays in Hollywood Cop, 1987), who always has the nub of a cigar in his mouth. And he’s teamed up for what seems like the hundredth time with Stack Pierce, and we always like seeing them, especially when they’re together. In the “awesome glasses” sweepstakes, Christopher Connelly gives Cam a run for his money here, and Connelly also has some great lingo, at one point calling fan favorite Joe Spinell, and we quote, a “Suckfish”. Oddly enough, that word (?) seems familiar and we think we’ve actually heard it uttered before on film. But we can’t remember which movie.

But besides all the names we know and love, we should also point out some of the lesser-known supporting cast: Benny, Fred’s Chicago contact and hot dog chef, is great, and FBI Chief Connors is truly a national treasure. But the drug dealer/pimp known in the movie as Sweet Louie, played by Magic Wand (did they really have to change his name to Sweet Louie?) has an amazing suit with dollar signs on it, making him the Black Matthew Lesko (or “Blesko” as it’s called by people in the know).

Because it was the 80’s, it has a title song (in this case by Jacob Wheeler),  which we always love, and other characters get their own song as well, such as “Sabrina”. It’s a tradition Fred would follow for years to come - just see Night Vision (1997) and its song “Dakota Smith”. So check out some prime, if overlooked, Fred today with this enjoyable outing.

This movie reminded me of Foxtrap and Charles Bronson's 80s movies. It has the same kind of gritty, down-to-earth feel. The other suckfish could be found swimming around Operation Nam (1986), both movies starring Christopher Connelly. Just waiting for SyFy to make Mega Piranha vs Mega Suckfish.

So much Williamson. I love that man, I actually can't believe I haven't seen this. Thanks again Ty.

Roger: Syfy isn't clever enough to think of that.

John: Thanks! There is a lot of Fred movies out there to discover. You will enjoy this one.

I remember liking this movie but I thought it was so bizarre that it ended with Fred getting hit with a potted plant. That was it. The End. Really strange. Maybe my copy was missing something.

Thanks! Hmm, don't remember that part. I think there was more afterwards.

I saw the Orion Video version and it didn't end up with Jake getting hit with the plant, after he gets hit, he gets up and shoots at Guildgood, who has ducked behind a wooden table, then Jake goes over and we see Guildgood lying dead(it was established earlier that Jake carried a 357 Magnum, hence why the bullets penetrated through the table).

That's interesting you found a different version of The Messenger. We didn't know an alternate cut existed on VHS.

Thanks for the info.