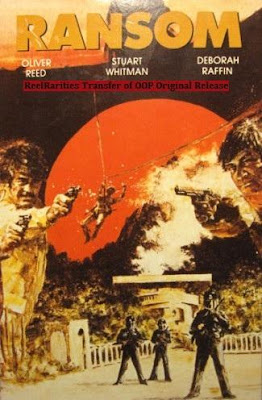 
Near Phoenix, Arizona, there’s a small town with the highest concentration of millionaires living there. When a psychopath in full Native American regalia (Koslo) sets up shop there and begins killing people with his bow and arrow, the townspeople soon realize he’s going to continue sniping people from long distances until he gets the millions of dollars he’s requesting.  So naturally Oliver Reed, Stuart Whitman and Jim Mitchum are called in to use their manliness to put an end to the madness. Will they succeed?

“Give me back my son!!!!!!”...is what you won’t be hearing in this tame, mediocre outing. Once again we’ve fallen prey to what we call “Lone Tiger Syndrome” - that being where we see a movie because of its stellar cast, and then are disappointed because many familiar B-movie names do not necessarily a good movie make.

Fan favorite Jim Mitchum is decent as the cowboy Vietnam vet Tracker (great name) but he doesn’t get enough screen time to develop his character, a common problem in these “star-studded” affairs. We also love Oliver Reed, but, inexplicably, he resembles Jerry Lewis in the scenes where he wears sunglasses. A lot of his dialogue concerns his drink orders. We’ll leave it at that.

Stuart Whitman is always a professional, and Deborah Raffin of Death Wish 3 (1985) fame is onboard as the classic (and pretty cliche) female reporter. The standout character, once again, is Paul Koslo as the baddie. He strongly resembles Kurt Russell, and does a great job (not quite as great as his turn in The Annihilators 1985, but once again, he actually had screen time in that one). 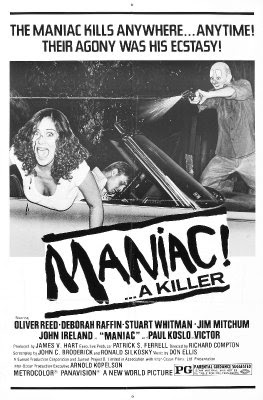 While there are a handful of okay kill scenes and maybe a few chases (and one exploding helicopter), this movie is filled with, well...filler, and the whole outing is stodgy, kind of like The Hit Team (1971). The movie doesn’t fulfill the potential of the cast, and it’s just not exciting enough.

The killer Indian should have had some goons, but perhaps the budget couldn’t allow for them because all the stars had to be paid first. Yet again we come back to the fact that there’s no one, singular character we care about. It’s all kind of a jumble with the multiple characters. Sure, Koslo tells his enemies they have to “pay the wind”, which is a precursor to Red Scorpion 2 (1994), but sadly the proceedings are slow and yawn-inducing.

As for the tape itself...no one sings the praises of Vestron more than we do, but they botched this one. It’s a horribly obvious pan-and-scan disgrace. They make it seem like the camera is resting on the seat of an exercise rowing machine that someone is tipping up, then tipping back.

At least they used one of the more accurate of this movie’s many titles. Most of the others make it seem like it’s going to be a horror movie of some kind. If you do ever check this movie out, unfortunately we recommend NOT to view the Vestron tape.

Featuring the song “Victor’s Theme: Shoot Him” by none other than Roger McGuinn and Patrick Ferrell, Ransom leaves a lot to be desired. We’ve certainly seen a lot worse, but we wish the powerhouse cast would have done something more worthy of their talents.

Aawww, bummer this wasn't as good as it looks. I'll admit, the title, cover art and cast already had me hooked. I love Whitman!

Everything was perfect for a fun film...but it just didn't deliver.