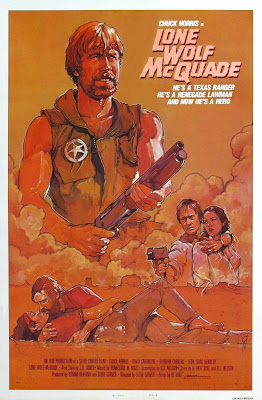 
Texas Ranger J.J. McQuade (Chuck) is notorious around his precinct, and his El Paso stomping grounds, for being a loner, a rebel, and a man with the dignity of a quiet badass. Despite the typical protestations from his Captain, Tyler (Armstrong), McQuade, nicknamed “Lone Wolf” for obvious reasons, always gets the job done. And when there’s trouble in Texas, he’s the man everyone calls to sort it out. His buddy Dakota (Jones) certainly knows that, as do his ex-wife and daughter.

But shortly after he reluctantly accepts a young new partner, Kayo (Beltran), Lone Wolf faces his biggest challenge to date in the form of one Rawley Wilkes (Carradine), a malevolent Martial Arts master who also just happens to be a gun runner. There’s also a love triangle kind of thing involving a woman named Lola (Carrera) between the two alpha males. After Wilkes sends his goons after Lone Wolf’s people, the stage is set for the ultimate showdown: McQuade vs. Wilkes! Also Leon Isaac Kennedy plays an FBI agent named Jackson and William Sanderson plays a underworld character named Snow. Who will triumph in this big, Texas-sized battle? Find out today! 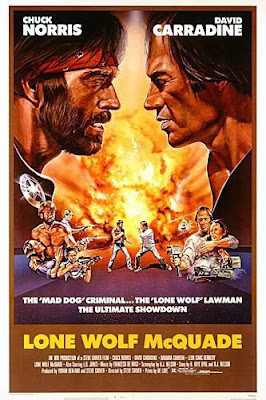 It’s easy to see, in retrospect, how the TV show Walker: Texas Ranger got started. The pitch to Chuck was probably “let’s turn Lone Wolf McQuade into a weekly show”. But the awesome title LONE WOLF MCQUADE (why aren’t there cool movie titles like that these days?) should be enough to signal to viewers what they’re getting into.

Chuck displays his usual deadpan likability, and there’s something about the guy you just can’t help but love. If previous year’s movie Silent Rage (1982) is anything to go by, he was slowly becoming less wooden and was honing his acting skills, as well as his Martial Arts ability. As the laconic ex-Military man who only drinks Pearl brand beer (and has many other uses for it as well, including as balm for his wounds) - when he’s not drinking Coke, of course, you truly root for him. It was naive and typical for Lola to think she could change Lone Wolf. Change him? Don’t even try!

The movie is filled with fun stunts and fights (thanks in part to John Barrett and Kane Hodder who, among others, did stunts) and has a nice modern-day Western feel to it. A lot of that is helped by the excellent score by Francesco De Masi. There’s also some pleasant humor at just the right times. David Carradine is suitably evil as the Karate man who smokes, Armstrong is the WYC (White Yelling Chief), William Sanderson almost steals the movie as Snow, and Leon Isaac Kennedy and L.Q. Jones provide quality support.

Director Steve Carver is known, at least to us, for later directing the movie that unleashed the word “Butthorn” on the world, Bulletproof (1988), as well as the lackluster Dudikoff vehicle River of Death (1989). H. Kaye Dyal got a writing credit here, and he would later go on to direct the Frank Zagarino opuses Trained to Kill (1989) and the great Project Eliminator (1991). And Aaron Norris plays “Punk”. So there’s plenty of talent to go around, much of which would continue to infiltrate the DTV and/or action movie world for years to come. Lone Wolf McQuade is an ideal starting point.

Lone Wolf McQuade is an enjoyable movie with a lot of nice moments. It’s competently directed and has a lot of great names in the cast. It’s hard to ask for more than that. We liked it.

Α classic. My favorite Chuck movie. The MIA series and Delta Force are great ones, but i always prefered this. Maybe it's because Lonewolf McQuade was my first Chuck movie.

Good review, I just did this one for my blog last week. It's a real classic.

Ed: Thanks! Cool. Will check out\link your write-up.

My father was (maybe 'is', wouldn't know if he's still around and would roundhouse kick him in the throat if I could... shit, sorry, gotta work out these daddy issues in these parentheses... hate the man, God, fuck him!) ahem, a drug addict and alcoholic. And the man was a finely tuned Olympic level dysfunctional fuck face in so, so many other ways. But.... the man had good taste in movies. Every Christmas, all he wanted was BASF brand blank VHS tapes so he could record and collect for posterity, what he deemed were "classics". He rarely bought the movies he loved. He was one of the few people in the VCR era who knew how to program his beloved machine to record his favorites. Head cleaner was a constant stocking stuffer and a new rewinder always found its way under the tree. Throw some cheap wrapping paper on Mick Martin and Marsha Porters annual thicker-than-a-porterhouse movie review guide and we could keep Pop's from a 'Nam nightmare flare up for months. Maybe. Unless he was watching (and recording on BASF blank tape) any sort of hut exploder or jungle slog. Then he started drinking. Then he got mean. I've worked hard to put a lot of those very special episodes out of my head, but this movie always makes me think of dear ol dad. I remember him having a pretty good beer buzz going as we watched it together one weekend afternoon. He thought it was okay to give me a taste of his Miller high life pony bottles. Thirty years and multiple rehabs later, whenever I see this movie or it's mentioned, I can't help but think about the scene where Chuck is buried alive in his indestructible awesome truck, comes back to consciousness after a severe beating, kicks in the trucks super-charger or whatever, and miraculously blasts out of the ground. His rookie partner rushes to his side and leans into to the truck and Chuck says....."Get me a beer kid.".

Chuck Norris's abilities as a psychiatrist are vastly underrated. Thank you for your candor and openness.