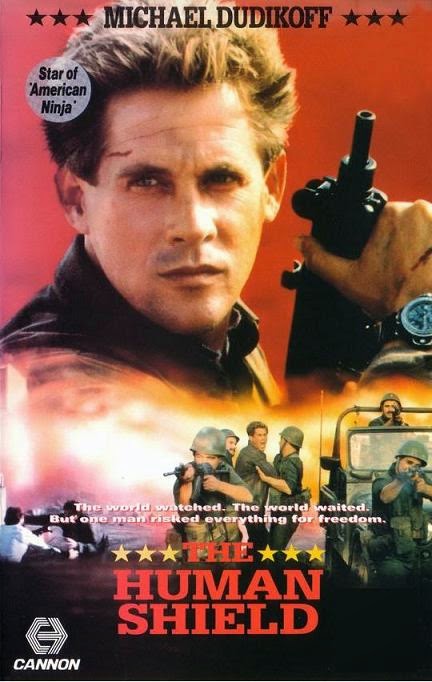 It was 1985 when Doug Matthews (Dudikoff) first crossed paths with the diabolical Dallal (Inwood) while he was in the military working for the U.S. embassy. Matthews was stationed in northern Iraq, and the two men had a life-changing altercation. Fast-forward five years later, and Matthews is safe back home in America...but Dallal’s goons have kidnapped his brother Ben (Hinkley).

Receiving no support from his own government, it’s not long before Matthews goes rogue and travels back to Baghdad to rescue his  beloved brother. He gets his Kurdish friend Tanzil (Gavriel) to help him, as well as an old acquaintance, a doctor named Lila (Azoulay-Hasfari), but it’s going to be difficult to face the ruthless Dallal and his supporters. With the clock running out on the life of the diabetic Ben, Doug Matthews is going to have to shield himself from the onslaught of bullets...HUMAN shield himself! Yeah, that’s the ticket...

The Human Shield was perfect for video stores in 1991 - it starts with Dudikoff riding an open-topped jeep in the desert with his awesome hair blowing freely in the breeze. Jeeps seem to be Dudikoff’s vehicle of choice in this movie; he really uses them to maneuver around the machine gun fire and even rocket launchers aimed at him this time around.

It’s also perfect for video stores because before the movie starts, there are no trailers for other Cannon films, or any other movies, but there is an anti-drug PSA. You gotta love the 90’s. It truly was a time when anti-drug PSA’s were inescapable: you couldn’t even watch Parker Lewis Can’t Lose or any of your other favorite shows without crazed maniacs smashing fried eggs or children screaming “I learned it from watching youuuuuuuu!!!!!”. You go pop in a VHS tape looking for some respite, and they’re there too. No wonder no one does drugs anymore. 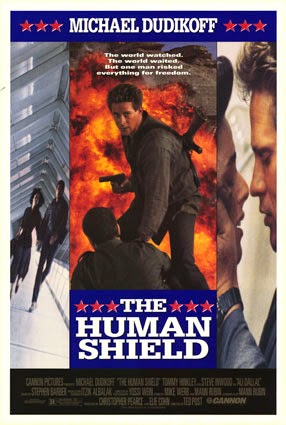 But back to the topic at hand, the movie is filled with innumerable mustachioed extras. At any given point while watching The Human Shield, there are an average of five men in the background, whether they be soldiers, baddies, or just plain townspeople, with thick black mustaches. It was either the height of fashion in the middle east, or maybe it was a “no mustache, no paycheck” financial matter. Regardless, it truly is a catalogue of distinctive facial hair on your screen.

If you enjoyed films such as Death Before Dishonor (1987) and Dudikoff’s Chain of Command (1994), you’ll surely also like The Human Shield, even if it does have some slow moments, as well as some awkward camera zooms. Those things shouldn’t be enough to put you off.

Dudikoff has to pretty much carry the movie on his shoulders, and while he is capable of doing that, another major name would have helped out the proceedings. Someone like Lee Majors the Second, Jay Roberts Jr. or Evan Lurie, to name but a few shining stars in the DTV firmament, could have helped Dudikoff bear his load. But the movie does include many of our favorite items: plenty of blow-ups and shooting, not one, but two screams of “Nooooooooo!!!!”, and of course a baddie admonishing his underlings that there better be “No More Mistakes”.

It was also somewhat refreshing that Dudikoff’s brother was kidnapped. It’s not usually an adult male that is the target of the hero’s rescue mission. It’s usually a woman, a young girl, or a young boy. So that was an interesting difference. Also we got to be privy to the Pentagon gym. There’s even a title card on-screen that tells us we’re in the Pentagon gym. Never before have our eyes gotten to witness where Dick Cheney does his squat thrusts and where Congressman Henry Waxman (D-CA) blasts his lats. Thank you Human Shield for this inside information.

Also check out write-ups from our buddies DTVC and The Video Vacuum!
Posted by Ty at 7.5.14

This site is gold. Seriously, your reviews are gems.

I too would give it three stars. I think that's fair, and I am an unapologetic fan of Dudikoff.

What I find interesting about his back catalog is that he had some winners (American Ninja, obviously), some better than average films (this one comes to mind), and some completely unwatchable drivel (River of Death, anyone?).

I guess you can make that claim about a lot of action stars, but a lot has to do with movie scripts as well as their budgets. It's easy to tell when an actor is mailing it in, but you hit the nail on the head when you wrote that the Dude carried this bad boy on his shoulders.

I really would love to see him in an Expendables film, or at least one more decent DTV flick.

Thanks! Appreciate that. Totally agree about your comments about Dudikoff. He has some duds, but overall his output is pretty decent. Would love to see him in another movie...maybe with Don The Dragon or Cynthia.

I agree with Joe. Your reviews are the best. I also agree with you and Joe on that this is a solid movie. It could have been better with some more wackiness or OTT violence, but I don't think that would have been possible with Ted Post directing.

I can imagine the ad for the casting of the villains: "Only Saddam Hussein-lookalikes need apply. No 'tache, no cash."

It would be awesome if The Dude returned to action movies. He's been MFA (Missing From Action) for too many years.

Come on! We can't have Dudikoff being a bad guy. Just can't buy that.

There was a rumor a bit ago about The B Team ... I would LOVE to see this happen.

I wonder whatever became of this.

Roger: Thanks! We really appreciate the kind words. Would love to see Dudikoff back on the big screen (or small screen...maybe another Cobra?) Great show.

Joe: Haha. It would be weird. Hope the B-team will get made one of these days.