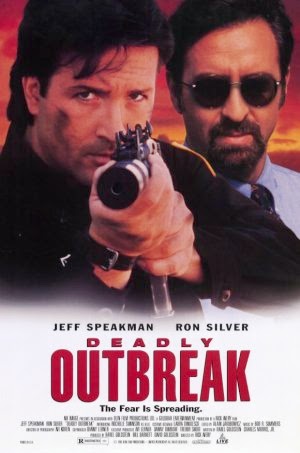 At a defense institution in Israel, Dr. Allie Levin (Swanson) has developed a highly advanced and extremely deadly chemical weapon. When the evil Baron (Silver) and his goons take over the institution by force because they want said weapon, all hell breaks loose. Luckily, a Special Ops escort from the U.S. embassy, Dutton Elvis Hatfield (Speakman) is in the building and plans to stop the terrorist attack. He has his wits, his Kenpo skills, Dr. Levin, and a young security guard, Ira (Alterman) to help him on his quest to take down the baddies. All Hatfield wants to do is get back to his son and play in the park. Will he be able to? Find out today!

The early-to-mid 90’s were truly the golden years for the, as we call it, “DieHardInA” movie. It’s simply amazing just how many Die Hard (1988) knockoffs came out in this short stretch of time. It seems hard to believe video store patrons of the day were really clamoring for them - at least this many of them, but the sheer numbers speak for themselves. Deadly Outbreak doesn’t exactly add much new to the sub-genre; its closest corollary is probably Lethal Tender, with maybe a little Crackerjack - but it does feature one of the best Speakman performances we’ve seen to date. 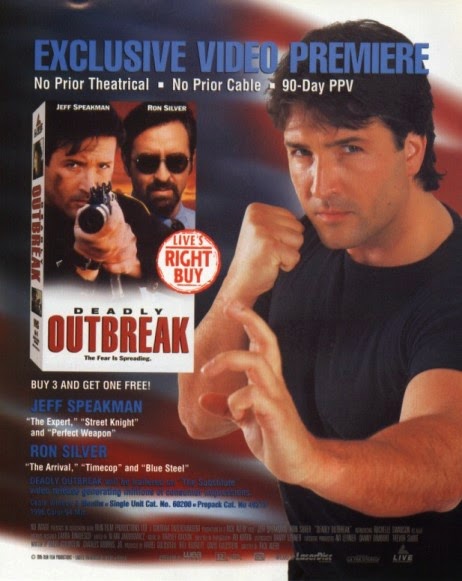 Speakman is likable, has a lot of great one-liners, and his Kenpo skills are truly fast and furious. Did we mention that he’s LIKABLE? Thank goodness for that. It seems so many DTV movies forget to have even one likable character. Unfortunately, the movie does fall into the “annoying and nagging woman” cliche with the female doctor, which we were disappointed by. That and the fact that there is not one but two “hot scientists” - the other being Starkov, played by a former Playboy Playmate (Marks), might lead to charges of insensitivity, but come on. The whole movie is entirely implausible. You wouldn’t be watching this movie if you were looking for plausibility. The main selling points are the mindless shooting, Speakman’s Martial Arts, and Ron Silver’s interesting performance, which we would dub as “level-headed evil”. One thing about Silver is that he tends to underplay his roles, speaking in quiet tones, which actually provides a nice contrast to all the bombastic shooting, stunts and blow-ups going on around him. We definitely miss Silver. We remain fans. 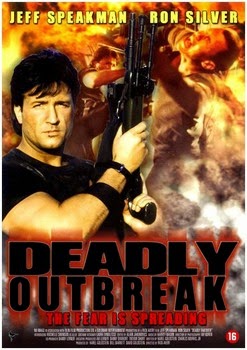 This is a Nu-Image movie before Nu-Image went to complete crud, although the 90’s CD-ROM-style effects at the outset of the movie perhaps point the way to the future. Although, to be fair, it was the 90’s. But it’s doubtful they looked convincing even then. Speaking of the 90s, look at the size of the word "Deadly" and the size of the word "Outbreak". Were they attempting to capitalize on the hit film Outbreak (1995)? Or just trying to trick video store patrons who aren't paying attention? The world will never know. Director Rick Avery is far more well known for being an accomplished stuntman, not for being a brilliant storyteller, and he does seem to get the most out of everyone, at least in the physicality department, from Speakman to Alterman, who looks like a young Nicolas Cage.

If you take anything away from today’s review it should be these two points: Deadly Outbreak is a textbook example of the 90’s DieHardInA movie, and that Jeff Speakman’s likable performance SAVES the movie. Without him, this would be a slog. So with those two things in mind, now you can make an informed decision as to see it. Go Dutton Elvis Hatfield!

Great review guys. I always wondered why Speakman never got a bigger career, he certainly deserved it! I mean, the guy can act for christs sake! And he doesn't have an accent either. Why did Van Damme make it big and he didn't? Anyway, I'll definitely look this one up. I'm always down for a good 90's Die Hard rip off. And Silver ruuuuuules as a baddie!

I completely agree. DieHardInA movies are varying in quality, but this is one of the better. Crackerjack is great, too.

They should make a movie with action stars that sometimes look fat (Seagal, Speakman, Dudikoff). They could it call it The Expandables.

WHY IS THIS THE FIRST TIME I'M LEARNING OF THIS MOVIE?

This trailer is GOLD.

RobotGEEK: Thanks! Speakman should've been bigger...he's better than Seagal. More likable. Ron Silver was great in this. Sad that's he passed away. Solid performance.

Joe: This is definitely worth a watch. A lot of fun.

The closest corollary to this is the Jeff Wincott film "Open Fire".

I've heard that Speakman could be really difficult to work with at times, so that may be why he didn't become as big as say Seagal or Lundgren, he may just burned one too many bridges to be able to find work.

Also I certainly don't think Nu Image went to "complete crud" at all, most of their films are pretty good.

We just watched Open Fire the other day. It was solid. Wincott should make a comeback too.

I loved this one. Reviewed it a while back (when I still had time to review!)

Totally agree, This was a solid action film. Hope you will review more!