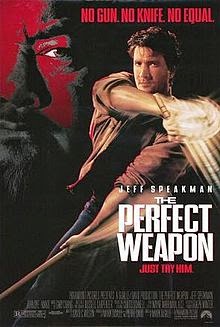 
Jeff Sanders (Speakman) has been training in Kenpo since he was a young boy. At first, it was because his father wanted to direct all his unruly, youthful energy. Now he’s a Kenpo master who abides by his own tagline, “no gun, no knife, no equal” (though technically he does use Arnis sticks). When his friend, a shop owner named Kim (Mako) comes under fire from the Korean mob, Sanders snaps into action. But will he snap some necks along the way?

Along his quest, he must utilize the help of his brother, a cop named Adam Sandler...er...Sanders, and a young punk kid named Jimmy (Fist of the North Star (1995) and Blood and Bone (2009)’s Basco) but it’s going to take all of Jeff’s Kenpo skills to fight off Yung (Hong), Kai (Tagawa) and the intimidating Tanaka (played, unsurprisingly, by Professor Toru Tanaka). Is Jeff Sanders the PERFECT WEAPON? Find out today...

The Perfect Weapon is the best Jeff Speakman movie we’ve seen to date...and why wouldn’t it be: it was his first starring role, as well as being a major studio release tailor-made to showcase his Kenpo talents to the world. As might be expected, the fight scenes are the highlight of the production. Speakman clearly has “got game”, as it were, enough to compete with all his competitors at the time.

The whole thing is well-shot and you can see all the moves. Refreshingly, this was before quick cuts, green screens and nu-metal corroded the action genre. Sure, it slows down before the climax, but that’s a common action movie malady we’ve seen countless times before. There’s the time honored warehouse showdown, but this time employees still work there and it’s not abandoned. So there’s a slight difference there. 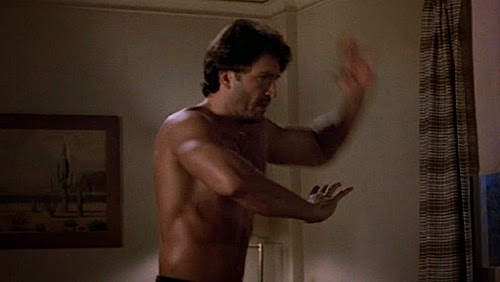 Gumming up the works is the introduction of Jimmy, the classic young punk kid. He gives his scenes with Speakman an unpleasant American Ninja 5 (1993) vibe. He even un-ironically whines “are we there yet?” at one point. Now, let’s not forget Mariska Hargitay, TV’s Olivia Benson, is technically in this movie as well. Despite being top-billed, she has literally zero spoken dialogue and appears only in brief flashes. It would have been so much cooler if Speakman teamed up with her to bust some heads in Koreatown. But no, there has to be an annoying kid, and the movie goes slower with Jimmy. 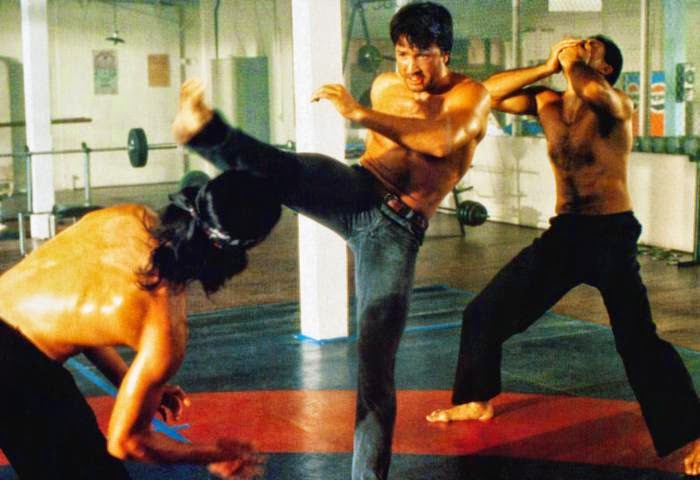 At least the movie is well-made, and, plotwise, it’s actually about Kenpo, which gives the whole thing consistency. Yes, the whole thing looks like it was shot on a backlot (there are some pretty obvious sets), but some of them are cool - look at “Club Croc-Pit”.

Notably, the film starts out with Speakman sweatily working out, shirtlessly, in sweatpants, to Snap’s “The Power”. You just know he intentionally put that song on because he believes it was written about him. You can’t get more 1991 than that. When I was eleven years old, I remember seeing a commercial on TV for this movie, and even then, thinking, “another one?” - meaning, I already knew about Arnie, Sly, Seagal, Van Damme, and perhaps others involved in the late 80’s/early 90’s action boom, and I was surprised “they” (meaning studio higher-ups) were rolling out a new guy. How could I, or anyone, have known that the U.S. action boom was about to go bust. We should really treasure what we have.

Director DiSalle has had an interesting career - he’s only directed this and Kickboxer (1989), but he produced Speakman’s Street Knight (1993), as well as Bloodsport (1988) and Death Warrant (1990). He wrote the story for Kickboxer 2 (1989), acted in all five of the aforementioned movies, and that’s about it for him. Apparently he only works with Speakman or Van Damme. Seems like a good way to go through life. Anyway, The Perfect Weapon, despite a few flaws, would prove to be the last theater-released movie from the action boom of the day. That alone makes it worth seeing.

As you say in your review, the opening scene where a shirtless, sweating Speakman goes through his Kenpo moves while Snap's I've Got The Power blasts on the soundtrack is beyond awesomeness. What a start to a movie.

As always, my congratulations on another stellar review.

I do have some comments, though:

I'm 99.9% sure I saw this once on TV and Mariska Hargatay had a few lines of dialogue, which I thought was odd, considering I own the VHS and she doesn't utter a word.

Thanks for not writing "Kung-Fu Jew" in your review. It would have cheapened it a bit.

I agree this was far and away his best film. I've seen a few of his, and in some he seems to be mailing it in (see: Street Knight).

One interesting thing about him not a lot of folks know is he has a rare disease that causes him to retain water. So he could look great physically in one scene and then bloated in another. That's really just an FYI for a future review if you need it.

I have read he can be a bit difficult to work with. Have you heard any stories?

Exploding Helicopter: Haha. So true. That's how you start a movie! Kenpo needs to make a comeback...same with Speakman.

Joe: I think the TV version has more Mariska footage. Would love to see a longer version.

You're welcome, we try not to stereotype too much.

If that annoying kid wasn't it, this would've gotten 3.5 stars with no problem.

Heard about that disease, that's unfortunate...thought i've heard stories of him being difficult, but can't remember...But Seagal is really difficult to work with. Haha.

This film came out before American Ninja 5, so I didn't really see any similarities to that film.

The only similarity is the annoying kid. Haha.

Haha. This is the summer Of Jeff! He "Speak"s with action, not words.

Dude, that last comment won the Internet for today!

Man, I've been wanting to check this one out again FOREVER. I remember checking it out when it first hit the theaters, and loving it. But wasn't it until recently that it FINALLY got a DVD release? Even then, it's not cheap. I think you've pushed me to finally get myself a copy. Thanks!

You're welcome! The DVD should be cheap, there are no special features on it. Haha.

FINALLY revisited this with Olive Films recent blu ray release. Man, this is 100% pure awesomeness! One of the best examples of this type of film. Great review guys! It's spot on!

Thanks! Totally agree, this was classic Speakman. This is a perfect 90s action movie.