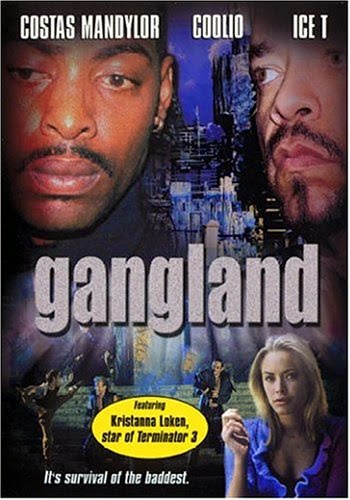 "It's survival of the baddest."


Set in the far distant future of 2010, Gangland is the tale of a post-apocalyptic wasteland where a plague runs wild. Yes, another one. Evil bad guy Lucifer (Klyn) kidnaps scientist Dr. Adams (Thomerson) because he’s close to figuring out a cure for the plague and he wants it all to himself. Meanwhile, Derek (Mitchell), Jared (Mandylor), and Alexis (Kinmont) go on the run from all the rampaging post-apocalyptic punks (what is it about the future that always breeds so many punks?).

While on the run, they take time out to engage in fight scenes with them occasionally. Will our three heroes survive long enough to be able to get the plague antidote from Lucifer - who has also bothered to make an unkillable, Frankenstein-like superbaddie to fend off his attackers? Find out today?

Gangland pretty much defines the term “low budget”. And yes, technically speaking, this movie is “bad”, but not for anyone with a sense of humor. Corral your buddies together, watch and enjoy. Presumably all the resources the filmmakers had went to the cast. You might think, if you just saw the cast list, you couldn’t go wrong, though Ice-T, Coolio, Kristanna Loken and Sam Jones simply make cameos. But our main heroes Mitchell, Mandylor and Kinmont kicking, punching and shooting goons might be enough, but your tolerance for stupidity, dumbness, idiocy, imbecility and ineptitude (truly, a movie like this does define the subtle differences in these words for you better than a dictionary ever could) has to be pretty high.

Fan-favorite Sasha Mitchell beats up more future-punks here in much the same way he did in Class of 1999 II: The Substitute (1994). Heck, it was only eleven years later in the worlds of that and Gangland. A plus goes to the fact that this is one of those “set in the future that is now the past” movies. We love those. We actively seek them out.

Helping out Mitchell on his quest (before we move on, watch out for his scene in the jail. His performance is truly a powerhouse) is Costas Mandylor, who walks away from fire in slow motion, and Lamas Wife Kinmont who looks disturbingly like Chelsea Handler in this movie, but no others that we’ve seen her in. Vincent Klyn, Mario Van Obama himself, is especially Peebles-like (well, Peebles from Exterminator 2 (1984), complete with throne, sunglasses and army of goons).

We’ve learned that great hair and clothing still exist in the future, which is a relief. One of Lucifer’s Lieutenants wears a spaghetti-strap tanktop almost all the time, except when he puts a leather vest with gold rings stitched up the sides and the word “wiseguys” painted on the back of it, over said tanktop.

Add to this mix the fact that it looks obviously shot on backlot-style sets (that you can visit anytime you want if you visit Universal Studios), and maybe a “fan-favorite death” or two, among all the absurd beat-em-up and shooting scenes, and you have...a movie.

Featuring two songs (the title song and “Freak”) by rapper C-Tab (Ice-T and Coolio must not have been available), Gangland is pretty lame by most standards, but provides humor value if you watch it with other people.

I thought this was pretty fun, Vincent Klyn is really effective as a villain.

How could Art Camacho go from directing Recoil, one of the best action movies ever, to making Gangland? And his later movies are all of the same ilk.

You're right. What a dropoff for Camacho!

I personally thought Recoil was somewhat below average, pretty boring and listless for the most part, I definitely thank Gangland is a better film overall.

Gangland is not in the same league...Recoil rules dude!

Recoil was just too depressing for my tastes.

We were depressed when it was over! Haha. Gary Daniels at his hard-hitting best.

The car/motorcycle chase scene at the beginning of Recoil might be the best chase scene ever. And PM had a lot of those.

We totally agree. Recoil rules...that's why PM was one of the best companies.

Wait a second, looks I got my movies mixed up, I thought you were referring to another Daniels film called "Spoiler", now that movie sucked.

I actually liked Recoil quite a bit.