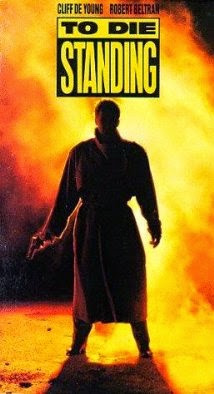 
Broderick (De Young) is a DEA agent who plays by his own rules. His latest assignment takes him to Lima, Peru where he is tasked with bringing down Castillo (Sacha), the biggest drug lord in the area. To do this, he reluctantly teams up with local cop Delgado (Beltran), and the personalities of the two men don’t exactly match.

Broderick has a glib, streetwise sense of humor and Delgado is very straitlaced. This original odd couple do indeed work together to bring Castillo to justice, but it’s not going to be easy. Helping them is government agent Constance Bigelow (Rose), but where do her true allegiances lie? Will Broderick and Delgado be able to make the streets of Peru safe from cocaine once and for all?

While it was nice to see Cliff De Young as the main star of a supposed action movie, we felt To Die Standing was a disappointment. De Young is good in it, and his bolo tie is stylish, but that’s just not enough. It feels like we’ve seen this type of thing before (and not in a good way). Mix Diplomatic Immunity (1991) and Prime Target (1991), and you get To Die Standing, also released in 1991. ‘91 must have been a banner year for action movies that needed more action.

But that’s the problem: the whole thing is a bit too goofy for its own good, and any time it starts to get close to being tough or gritty, it backs away. And thanks to a lack of a big, scary, menacing villain (not to mention a lame ending and some early “fast motion”), To Die Standing, despite its cool title and box art, is a letdown.

Granted, the movie was from a more innocent time - a time when you could bring a gun on an airplane and have it out in an airport, and you not only WEREN’T a terrorist, but  you were one of the good guys! Despite the fact that the movie was released by a major studio on VHS (Columbia), its reach doesn’t appear to be that long, as it remains obscure and very few people have seen it. Maybe it’s all for the best, but people should be able to make up their own minds. But it was produced by New World, and the project suffers from Roger Corman’s middle-of-the-road sensibilities.

This was director Morneau’s first directorial effort, and he continued to make more DTV movies after this, such as Soldier Boyz (1995).

Sadly, To Die Standing doesn’t have “it” and with all the competition in video stores at the time, it just kind of faded into the background.

I thought this one was pretty decent, DeYoung is an underrated actor, Rose was also pretty good.