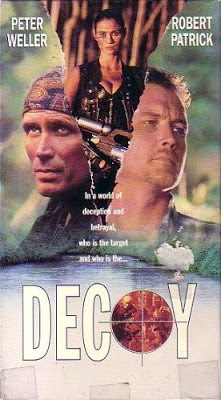 
Travis (Patrick), a former government op, is hired by his old commanding officer, Wellington (Breck) to protect his daughter, Diana (Vogel of Ring Of Steel fame) for a temporary amount of time because bad guys are after him and his family. Travis agrees to the job, but only if he can bring in his buddy Baxter (Weller) to help out. Even though Baxter is a nutty guy, Wellington reluctantly agrees. What then follows is Travis, Baxter and Diana moving from place to place in the woods, as Katya (Lewis), Daniel (Kulich) and other baddies try killing them using various means, but usually shooting. Most of the rest of the movie is this cat-and-mouse game, but there are a few twists every now and again to try to keep the viewers’ interest. Who is the real DECOY?

Sure, Decoy may have some bigger names, like Robert Patrick and Peter Weller, and it may be shot well using picturesque Canadian locations (shot in Regina and La Ronge, Saskatchewan), but don’t be fooled: this is just as dumb and run-of-the-mill as many other DTV productions out there. It was clearly trying to be more upper crust and be almost theater-quality, but ultimately doesn’t get there and is a disappointment. 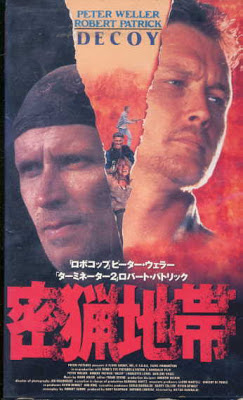 There are some cool killings, and the baddies have these futuristic wrist rockets that they use on their enemies, but that’s really the only noteworthy invention here. And that doesn’t a good movie make. There are some utterly stupid, time-wasting “romantic” elements between Baxter and Diana for a while, which don’t need to be there. Diana is the cliched “complaining woman dragged along into an adventure” we’ve seen so many times before. On the other end of the female spectrum is Charlotte Lewis, looking amazing with her outfits and high-powered weaponry. It’s quite a change from her role in Men of War (1994). Robert Patrick puts in a personable enough performance, but it’s hard not to compare this to the awesome Zero Tolerance (1994), which is Patrick at his absolute best. Weller puts in a “quirky” performance, with his pseudo-philosophical dialogue, and he’s always good, but Decoy as a whole is mediocre, with tons of “pew-pew” gunfighting scenes that don’t really add much.

Also on board as one of the baddies is Vladimir Kulich, who has played the “Eurotrash Bad Guy” in such movies as Crackerjack (1994), Red Scorpion 2 (1995), and Breach Of Trust (1995). We’re definitely getting used to seeing him. There’s also the prerequisite torture scene, but this time the movie opens with it and gets it out of the way. But the problem with Decoy is every time it starts to get good, it pulls back. It’s almost like the movie has a fear of success.

Decoy is ultimately wasteful with what resources it has, and it never rises above your standard action premise.

I quite liked this movie, but understand the points you have. Most 90s movies take place in abandoned industrial locations, so having a whole movie outdoors was a refreshing change. The actors were above average as well. It's true, however, that a movie should rather be over-the-top than pulled back.

You're absolutely right. This movie has all the right ingredients for a fun action flick, but it just doesn't deliver the goods.

Once i saw the vhs cover in the local video rental store, i grabbed it instantly, cause of Peter Weller and Robert Patrick. But man it was so/so flick. Could have been better.

Anyways, is always fun to see a movie poster or the title and start having this flashbacks.

Thanks for your comment. We love hearing about people's flashbacks to the video store...if you have any more keep them coming.

Agreed, this was disappointing. Weller and Patrick should try again...its not too late.

Since i found the blog, i will keep them coming. You guys are already in my favorites.

Thanks, Snake! We appreciate that. Looking forward to more of your video store memories.

Disagree with you on this, I found it to be pretty enjoyable.

There were some decent parts, but as a whole, Decoy was pretty disappointing.

I got the VHS (and all my other tapes) from the Videostore, but there is only one in our town with 140.000 citizens. Many stores are closed. And its title in Germany is - oh wonder - Decoy too.

I agree with Snake and you are one of my favorites.

My DVDs i got from an Internetstore but the owner delivers my order personally to my home.

I liked this move, revisited often. And - oh wonder - the german VHS-Title was Decoy too. A Rarity. And i agree with Snake. You are already in my favorites.

The most of my old Tapes i bought in my favorite videostore, but in our town with ca. 140.000 people there is only one - all the others are closed. My DVDs i get now from an Internetshop, but the owner brings all orders personally direct to my home.

Thanks! We really, really appreciate that you enjoy the site. That is very interesting a person comes to your home and delivers your movies.

It's very sad that video stores are closing all over the world...at least we both have one left. We still celebrate the golden age of the video store.

I know him since years and bought the motst of my 5700 DVDs at his former store and now at the his internet-shop. His residence is 20km (16miles) away from mine. So he delivers the movies and takes my money personally andneeds a lot of time for it. We talk too much - movies and more.

You have an amazing collection of DVDs! And you have a good friend\connection.

can any one please help me with the link to download this movie please my email is saidialiseif@gmail.com