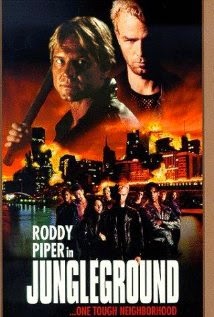 Lt. Jake Cornell (Roddy) is a Canadian cop who is somewhat on the edge, but he gets pushed to his limits when he must survive in a ruthless, lawless urban center of the Great White North called Jungleground. The gang that controls Jungleground are a bunch of Norse mythology-inspired baddies called the “Ragnarockers” or just “Rockers” for short. Members include Thor (Wood) and Loki (Johnston), but the leader is of course Odin (Bourne). When Odin kidnaps Jake’s girlfriend Sammy (Higginson of Airborne (1998) fame) - just as he was about to propose to her, no less - he proposes to Cornell that if he can survive the night in Jungleground, he will free Sammy. So Jake must use all his survival instincts to fight through a night fraught with all sorts of obstacles. Will he make it?

Jungleground, not to be confused with Thunderground (1989), is a decent Roddy outing. Some of the most entertaining aspects of the movie are just how 90’s it is, and just how Canadian it is. Sure, Roddy is charming as usual, but how can he compete with Boy Meets World-style hair, rollerblades and high-waisted jeans? Marry that to the Canadian DTV vibe we’ve all seen many times before, and you get the general sense about the proceedings.

This was back in the day when all Roddy had to do was flash his million-dollar smile and wear a pre-Trenchcoat Mafia trenchcoat, and you had half the movie right there. One of the flaws of the movie is that Roddy didn’t get a cool intro to his character. You’re just kind of thrown in - there should have been an action scene or at least a scene where his Chief was screaming at him because of his rogue ways. But ultimately Roddy carries the movie, so it all smooths out later. 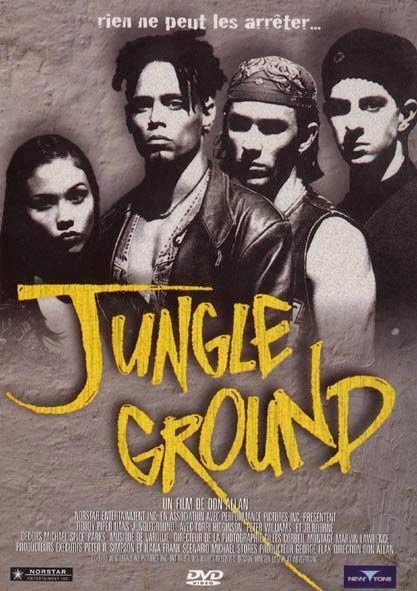 It has all the cliches we know and love, some of which include yelling while shooting a machine gun, and the prerequisite torture. There are plenty of chases, shootouts and blow-ups, not to mention Roddy executing some classic wrestling-style moves on the baddies, so all the right ingredients are there.

But as is often the case, the movie starts to lose steam before the climax. More than likely that’s because this is a DTV version of The Ultimate Warrior (1975), The Warriors (1979), Escape From New York (1981), or any other movie where someone has to survive/escape through a treacherous urban environment. There’s not much more to the movie than that, but do we really need any more? But to the movie’s credit, characters do say the word “Jungleground” a lot...it’s not just a movie title, it’s the name of the place - and a way of life.

While Back In Action (1993) and Tough and Deadly (1995) remain our favorite Roddy’s that we’ve seen to date, Jungleground is not bad and is probably a one-time watch.

Also check out a write-up from our buddy, DTVC

Indeed, Msot of Piper's efforts are entertaining and worth at least one watch, I was pleasantly to see him cameo in the video game Saints Row IV.

Totally agree. Hope to re-watch Immortal Combat soon. Loved Back In Action and Tough and Deadly.

Piper's DTV career was solid. Back In Action and Last To Surrender were my favorites. They Live was his best movie.

Jungleground always felt like a post-apoc movie to me, because it's hard to believe such a bad urban area can exist...in Canada?

Totally agree. All three of those are classics. Haha, thankfully Canada is not an urban warzone...yet.