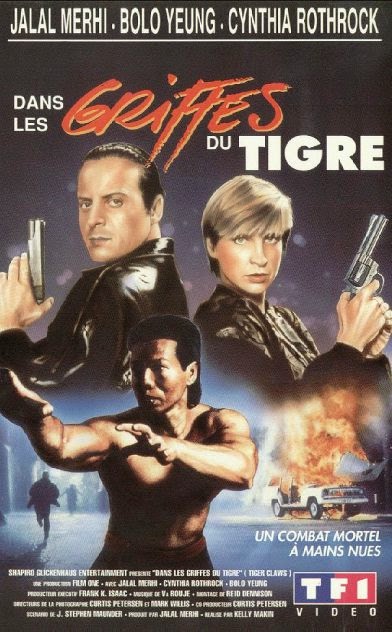 
A mysterious serial killer known as the Death Dealer is stalking the streets of “New York City” (not Canada. Not Canada), and the only clue the police have to go on is that the dastardly murderer uses an obscure, underground fighting style known as Tiger. Because of this, the police chief assigns officer Linda Masterson (Rothrock) the case - he knows she is a practitioner of Martial Arts. He has another “Kung Fu cop” on the force, a strange foreigner named Tarek Richards (Merhi), so, naturally, he pairs the two up and sends them on their way. Despite Tarek’s lack of enthusiasm, he still is a rogue cop who plays by his own rules. Usually garbled, presumably. So Tarek goes undercover at the Tiger training center and meets the mysterious Chong (Bolo). Will our two heroes get to the bottom of the mystery of the Tiger Claw Killer? Find out sometime...

So if you were going to paint on your hair, what would you do with your life? Maybe become an insurance salesman? Carny? CEO of a company? Nah, you’d want to be in front of the camera, whether you had any business being there or not. Hence the rise (?) of Painted On Hair Guy, AKA Jalal Merhi. Seriously, this guy doesn’t use a comb, he uses a paintbrush! Hey-Oh! But, in all seriousness, if you could paint on any hair in the world, why would you choose that?

He also has a thick accent AND deadpan delivery. This “Deadpan Accent” is slowing things down, and he has no screen presence or spark. On the polar opposite end of the spectrum, we have top fan favorite Cynthia Rothrock as his partner. Any interest generated by this movie comes from her. However, the no-energy of Merhi coming up against the genuine energy of Rothrock results in a wash for the viewer and the two forces cancel each other out. So we’re left stranded in a Sargasso Sea of slowness in this amateurish, low-budget-junky-feeling exercise.

Much of the movie has almost a childish feel - there are silly shootouts and fights that feel like kids playing in the schoolyard. Even the laundry list of cliches - it’s an election year, the final warehouse fight, the baddie saying to the hero how they’re really both the same, the drug deal gone wrong, among many others - here are not FUN cliches, necessarily, like they many times can be.

You get the feeling director Makin was makin’ this stuff for the first time ever, not retreading it. Amazingly, the writer, Maunder, came on board as director for Tiger Claws II. The dialogue also feels infantile, with a Detective Henderson stating, and we quote, “Serial killers are hard to find.” Additionally, if more people die horribly, it “won’t look good.” But there is a classic “searching for the Martial Arts school montage”, so, there’s that. 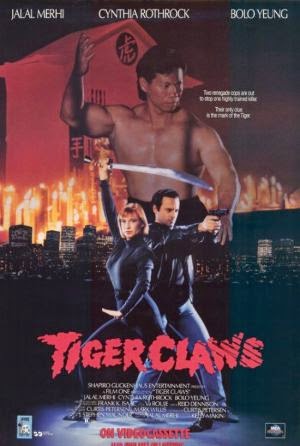 For the deadliest Martial Art ever, the extensive training sequences sure are boring, and pounding your fists in woks of sand repeatedly somehow start to lose their flair. This highlights the main problem with Tiger Claws - missed opportunities and untapped potential. You’d think with Rothrock and Bolo Yeung, if not Merhi, the movie would have been better. But Rothrock does pioneer the maritime Martial Art of “Oarfighting”, hinting at what the movie could have been if it had a bit more life and pizzazz.

Many in the cast have funny voices, and perhaps leading the pack is one Bill Pickells, in the acting stretch of a lifetime as Bill Pickells. Supposedly he’s a badass Martial Artist, but the guy looks like Oates and sounds like he’s been sucking on a helium balloon for the past several hours. But his credit at the end is almost up there with gems like “Sgt. Slaughter as Sgt. Slaughter” and Mike “Cobra” Cole as “Cobra” Cole. But Pickells would still have been a better choice for the male lead than Merhi, who is very stiff, and, if we’ve said it once, we’ve said it a thousand times, he was separated at birth with Bronson Pinchot. We’re fairly certain Merhi was actually born on Mypos.

Featuring the hair metal song “Break the Walls Down” by Attitude (in the poolhall scene - another sliver of what the movie should have been all along) - Tiger Claws was inexplicably followed by two sequels. We would say it’s for Rothrock and Bolo Yeung fans only.

This was OK, but not one of Merhi's better films, both Expect to Die and Expect No Mercy were more enjoyable.

This was an OK movie, as is the first sequel. Tiger Claws III is worse.

Your review finally clarified for me why Jalal Merhi is called Beirut's Steven Seagal; garbled speech and painted-on hair.

Roger: Haha, so true about Seagal. It's a tight "fake hair" race, but Merhi's is worse.