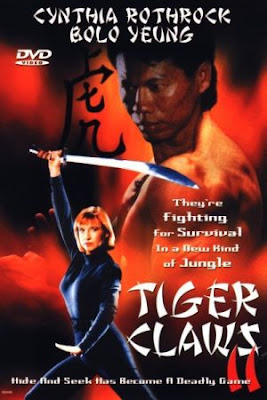 When evil arms dealer Victor (Lurie) joins forces with the sinister Chong (Bolo), presumably to start some kind of criminal empire, and people are found dead all over San Francisco, cops Linda (Rothrock) and Tarek (Merhi) want to get to the bottom of it. Also they are in a romantic relationship. Things get really complicated when Dai Lo Fu (Ong), using his Chinatown restaurant as cover, is staging underground martial arts contests - with a supernatural twist. Now, to get to the truth, Linda and Tarek must compete. Will any of this make any kind of sense?

Clearly the world was asking - nay - BEGGING for one more Tiger Claws movie. And there’s even a third one after this! This movie is a hodgepodge of half-baked ideas that make no sense. It feels like the filmmakers were just kind of flying by the seats of their respective pants and kind of making stuff up as they went along. Probably not a good idea, especially if your choice for the male hero is the unintelligble, mumbling, personality-less, unlikable Jalal Merhi. He looks like a Balki-era Bronson Pinchot crossed with Night of the Wilding-era Erik Estrada. One of the biggest plot flaws is why Cynthia Rothrock is in love with him. And the scene in which he must use his awesome martial arts prowess to “save” Cynthia Rothrock is just preposterous. It should have been the other way around. 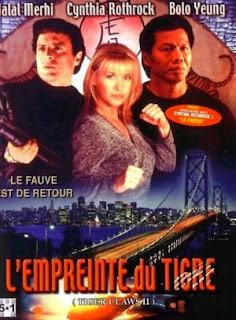 We like Evan Lurie, especially after American Kickboxer 2 (1993), and he was a good choice for one of the villains. He is charismatic and perhaps a member of the Trenchcoat Mafia. How his illegal gun shipment has to do with a “secret passage” and a mystical prisoner (Lee) cannot be explained. Han Soo Ong, who we’ve seen in Last to Surrender (1999) and King of the Kickboxers (1990), we believe is Korean, so why is he the crime boss here?

The presumed Punchfighting sequences are just cash-ins for video games like Street Fighter and Mortal Kombat, and are just silly and nonsensical. Additionally, the film is filled with funny continuity errors and has that Canadian feel. And while Merhi isn’t quite as sucky as he was in Talons of the Eagle (1992) (which was written by director Maunder, as was TC 2000 (1993), as well as the other Tiger Claws movies and other Merhi vehicles - he must have really believed in the “Tiger Claws” concept, as well as Jalal Merhi, so his judgment is certainly in question), he’s no prince here either. Even Rothrock, who we love, can’t save this one.

"Has that Canadian feel."

Hilarious. That comment somehow made me picture both "The Littlest Hobo" and original "Degrassi" all at the same time. Then I barfed in my mouth a little.

Haha! We are glad you enjoyed that...sometimes it is frighteningly accurate description.

Personally I don't mind Jalal Merhi that much, he was pretty good in Expect No Mercy and Expect To Die. This film was OK, but the third was better.

You really got me twice. "Balki-era Bronson Pinchot" is hilarious because it suggests that he has another...

And I didn't even realize it, but I was secretly begging for more Tiger Claws action.

That said, I've always loved me some Bolo Yeung.

Venom: He wasn't too bad in Expect No Mercy...gotta love the floating Merhi head. Haha.

M. Brown: Thanks! Have you've seen all THREE Tiger Claws movies? Because there are three of them. We've only seen this one to date. We love Bolo and Bronson too....they should have made a movie together.