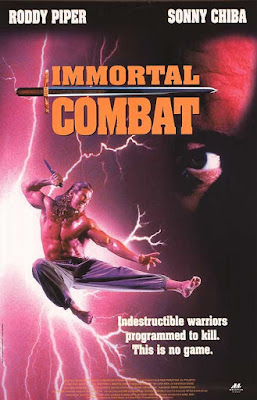 John Keller (Piper) and his partner J.J. (Chiba) are cops. J.J. is also a ninja. Keller travels to the Caribbean island of Saint Marta and discovers that a company called HybriCo is manufacturing a race of super-warriors, presumably so they can be victorious in punchfighting matches around the globe. Quinn (Foster) is the lead baddie-ess who controls her nefarious employees, who look like off-duty Ghostbusters. HybriCo’s main success story is Muller (McBee, AKA fan favorite Malibu), an unkillable super-oaf who wears a sleeveless tuxedo shirt with a red bowtie and red matching cummerbund. While in Saint Marta, Keller makes friends with Yanagi (Lister), and develops a romantic interest with (yet another) journalist named Karen (Greene), but while initially J.J. stays home and trains, eventually he joins Keller on Saint Marta so they can put an end to all the madness...but will their combat be IMMORTAL? Find out today...

Immortal Combat is classic 90’s fun all the way. It kicks off with a bang-up opening sequence and pretty much maintains a peppy pace throughout, with plenty of action, fight scenes, and other shenanigans. The filmmakers were in tune with what fans want, which is a rarer phenomenon than you might think. While the movie overall is a winner, truth be told, it is overlong at 109 minutes. If they could have trimmed it down to 90 or less, we’d be talking about an all-time classic right now. As it stands, it’s still a winner - it’s what Overkill (1996) SHOULD have been. Just imagine a Raw Force (1982) for the 90’s - but with more shirtless men punching each other. 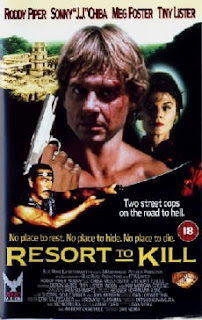 Roddy, as usual, is engaging and charming in the lead role, and he brings energy to his fight scenes. Chiba brings an old-school badassery that’s a nice counterpoint to Roddy. Chiba’s English isn’t that great, which doesn’t really help when he’s getting emotional in the scenes with his pretty, white, blonde daughter (he’s explaining why he has one, which we wish they didn’t bother doing), but it doesn’t matter when he’s doling out ninja stars like playing cards. Besides, it gave off a Chinatown Connection (1990) vibe, which is never a bad thing. Plus, Roddy has found himself in a similar situation in Last To Surrender (1999).

It was nice to see Roddy teamed up with his old They Live (1988) pal Meg Foster, and she does indeed make the most of her role here. We also enjoyed seeing a happy, upbeat Tiny Lister, instead of the usual evil version. Why he plays an Asian (?) man named Yanagi remains to be discovered. Of course, the real star of the show (in all of our hearts) is Malibu, who, naturally as a course of being immortal, grunts a lot and makes strange noises. More than usual. His hair is especially Lorenzo Lamas-esque this time around. 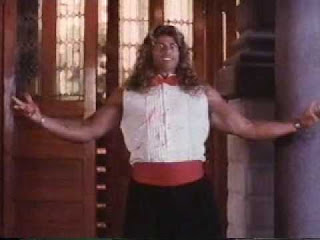 There’s punchfighting, slo-mo gun-shooting, a WYC (White Yelling Chief), and the whole concept of putting Roddy Piper in a situation with ninja action was inspired. Rounding out the 90’s cred, it even goes into a Surviving the Game/Most Dangerous Game situation at one point. We wish the Karen character wasn’t a cliched reporter role, and had more involvement in the butt-kickery, but hey, it goes with the territory.

Featuring plenty of songs by Liz Constantine, including “Resort To Kill” (also the alternate title of the film, which, presumably, was changed at the last minute to cleverly put a spin on SubZero, Johnny Cage, Sonya, Scorpion, Joe Lieberman, and the gang), and released by A-Pix entertainment on VHS, despite its length, Immortal Combat is a gem and well-worth seeking out.

Also check out write-ups from our buddies, DTVC and 10k Bullets!

I'm running out of ways to say "Great write-up, as usual," so however you want me to phrase it in your head, please go with that.

As I was reading this review, I was thinking to myself mere seconds before I got to the second paragraph and you wrote "The filmmakers were in tune with what fans want, which is a rarer phenomenon than you might think." that you guys to me seem to be experts in the DTV field, being as you've collectively sat through what I would imagine to be thousands of hours of these productions.

Having said that, I have one legitimate question for you: Do you honestly feel that DTV productions are more creative than major Hollywood movies? I would say so, as they seem to more consistently have outrageous plots, over the top antagonists, and stretched budgets. It's my humble opinion that the majority of the DTV movies are in tune with their respective audiences, as they don't take themselves as seriously as Hollywood.

Would you agree with that?

I agree. This was a solid movie. The immortals' swordfighting was reminiscent of Highlander. Highlander seemed to be a very influential movie at the time. At least Lorenzo Lamas and Daniel Bernhardt made Highlander-inspired movies.

Joe: Thanks! Low budget action movies have to do more with less. They have to this out of necessity. To compete with Hollywood, they have to get more creative and so we would largely agree with your assessment.

Roger: We have seen both Swordsman movies (check out the reviews if you like), the 2nd one is highly ridiculous and not exactly Connor MacLeod material.

Haha! Definitely worth a look

This is one such memory from the 90s... this proves that is immortality possible or not