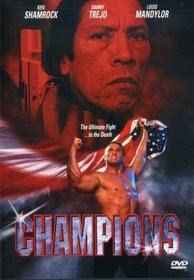 
William Rockman (Mandylor) was a professional fighter who decided to become a Martial Arts instructor for children after accidentally killing an opponent in a tragic training accident. When Congress outlaws UFC-style underground fighting (is this supposed to take place in the future?), it morphs into something called “Terminal Combat”, a far deadlier sport (and should have been the title for this movie). When Rockman’s brother Ray Rockman (Wolfe) is killed by reigning Brakus/Tong Po-style super-evil baddie The King (Shamrock), well…you might find this surprising, but William comes out of retirement to get revenge for his fallen brother. It just so happens that unscrupulous Terminal Combat promoter Max Brito (Trejo) is staging the biggest contest yet – a multi-billion dollar fight extravaganza broadcast by satellite. He gets fighters from all over the country, imprisons them in his lair, puts chips in their necks so he can control them, and forces them to fight to the death for amusement and big bucks. But they didn’t count on one thing – the scrappy and tenacious William Rockman. He now has to corral the other remaining, non-dead fighters to break out of prison and save the day. Will their fate be terminal…or will they come out as CHAMPIONS?

Watching Champions is the Punchfighting equivalent of what a doctor must feel like when they are observing a patient fighting for life who is hooked up to an Electrocardiograph machine. There are long stretches of a flatline where the doctor must despair that the patient is dying, but occasionally it will spike up, and excitement must ensue that there is life left in the patient yet. In other words, there are some commendable things about Champions, but the movie is too damn long at 98 minutes. This stretches out the better aspects and unnecessarily makes them fewer and farther between. If it were streamlined and the lead weight taken out, this movie could almost be a minor classic. If it were 80 minutes long, we’d really have a winner here. 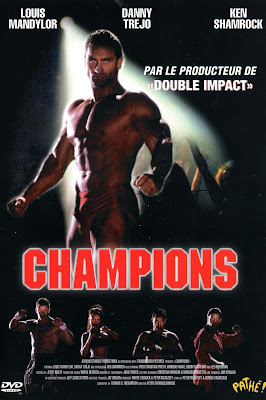 Okay, so it was the 90’s, Ken Shamrock is involved, and it’s what you might call the “early days” of UFC. Most of the fight scenes are like live-action versions of the classic video game Pit Fighter, but with sillier pants (or lack thereof - see cover above). Most of the fighters and fans shout “Yeeeaaaaaahhhhh!!!!!” a lot. This must be why these underground Punchfights to the death are so heavily traded on “black market VHS”, and/or why George “Buck” Flower is involved (perhaps they gave him an Irish accent here to distinguish him from Randall “Tex” Cobb).

As far as our hero is concerned, it appears that Louis Mandylor is physically shrinking more and more as the movie goes on. If you compare his height to the other people in the movie, it appears he devolves to Tom Cruise-level proportions as proceedings roll on. He also narrates it, presumably for people who find the story too hard to follow. To add more unnecessary plot, it appears he has a history with “The King”, there’s a love interest between him and fellow fighter Kimberly Pepatone (Blackford, a Paget Brewster lookalike who you might remember from “Force”-ful productions like Total Force and The Silent Force), and a fighter who looks as if David Letterman was younger, and a meathead – who also has a love interest. This guy, who we’ll call David LetterMeat, is played by Lee Reherman – a very similar last name to Letterman. Coincidence?

Danny Trejo is engaging as the promoter Max Brito, although it sounds like other people are either calling him “Lance Ito” (it was the 90’s, after all. Maybe Judge Ito promotes underground fighting on the side. What a thought), or “Max Burrito”, which might be horrendously racist. A good chunk of Trejo’s dialogue consists of him giving an extended maniacal laugh. Speaking of which, the “corrupt politician on the take”, subplot – yet another subplot – was one of the better ones and should have replaced some of the lesser ones.

Another bit of the storyline, that Pepatone is a fighter who takes out her repressed anger that stems from a prior assault on her opponents, could be a movie in itself. It was another strand that was undeveloped, which in this case might be good because we didn’t want Champions to be over three hours long.

At least the fighters are skilled and enthusiastic, and have their own individual personalities. It’s not a mush of meandering meatheads like in later movies of this sort. It all comes to an entertaining and enjoyable climax, which should have come much earlier, because at that point the viewer’s attention has flagged. The sight of Ken Shamrock dressed in not much more than a red wrestling Speedo while screaming and shooting a machine gun amidst a hail of gunfire, explosions, and guard tower falls is nothing short of awesome, but you have to swim the Sargasso sea to get there.

One of the aspects of Champions that adds a level of interest is the fact that rapper Kool Keith is in a couple of scenes for no conceivable reason. He even has an encounter with a confrontational meathead that has “Jesus Saves” tattooed on his chest. So, all is not lost. In other music news, the end credits has a list of bands involved, but no song titles or other information. The list is as follows: Civil Rite, Mother, Try, Faded, Corporate Dick, and Black Ass ID. Maybe they supposed the band names speak for themselves.

In the end, Champions does indeed have some bright spots and noteworthy aspects, but they’re spread awfully thin over an overly-extended running time. The verdict has to be that we would recommend the movie to Punchfighting fans with a lot of patience.

I just watched this one over the weekend. The problems with this one were too many to mention, but some of the things that caught my attention were:
1. A punchfighting movie has a certain formula requiring fights at regular intervals and a build-up to the final round. Champions gets bogged down with other things and only reaches the quarterfinals.
2. The third-rate grunge rock on the soundtrack made by bands with god-awful names. The end titles state: "The soundtrack title Corporate Dick is now available." Is that even English, and if so, what does it mean?
3. The cabins where the fighters live only have three walls. Apparently privacy is not a major problem. Or was it a post-modern "breaking the fourth wall" joke?
4. Mandylor was so much shorter than the other fighters that he should have been a shoe-in for The Hobbit movie.
5. I agree that Terminal Combat would have been a better title, but the movie simply isn't good enough to deserve that title.

Congratulations on your 1,200th review!

Thanks for the congratulations!

It reference to point number 2, we're reasonably sure that's English, but this is the first time it was ever written. The career of Corporate Dick didn't go that far, they aren't even on Discogs, but their music was in Champions! Something to celebrate.

We agree with all your other points as well.

This film bored the piss out of me, i'd give it one star if I was feeling generous.

Except for the one scene with Shamrock towards the end, we agree.