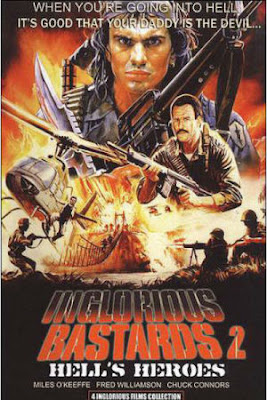 Set in the jungles of ‘Nam during the war, Hell’s Heroes tells the tale of Sgt. Darkin (O’Keeffe), a badass soldier whose badassery is constantly hampered by bureaucratic red tape. Naturally, this causes Darkin to become disillusioned with the war. When Senator Morris (Connors) comes to visit the troops on some sort of a press junket, Darkin expresses his dissatisfaction with life and the TV cameras and radio microphones eagerly pick it up. When Senator Morris and the soldiers he’s with are ambushed by some sneaky Viet Cong bad guys, Darkin is made the scapegoat even though he had nothing to do with it and was merely expressing his opinion. During his period of punishment, he meets up with other rebellious soldiers such as Feather (Fred), Trash (Green), and Bronx (Gori). Now a team with nothing to lose, will the men fight their way out of Vietnam when there are traps and gunfire everywhere? You just may find out…

Hell’s Heroes is yet another mediocre jungle slog that even Miles O’Keeffe, Fred Williamson, and Chuck Connors could not enliven. That should tell you how dreary it can be. Granted, fan favorites Fred and Connors don’t get a lot of time to shine here. That’s one of the problems. The major issues are, as we’ve seen time and time again, a lack of lighting, and the fact that there’s no one central villain. You’d think those would be no-brainer inclusions to an exploding-hutter like this, but no. The lights are off for about 60 percent of this movie’s running time and truly no one is home.

Just some mindless machine gun shooting, helicopters flying around (none explode), and huts exploding – not to mention O’Keeffe doing his Clint Eastwood impression again – is not really enough to get this plodding mush off the ground. Having more Chuck Connors would have been an improvement, but it must be said that his exit is grand, as is befitting the great man. It is highly appropriate that O’Keeffe’s character is named Darkin – we’re certainly in the dark for the majority of the film. It’s almost like they were thumbing their noses at us, the loyal audience. If that’s the case, that’s not cool, man. When a movie is so dark that the only light sources are muzzle flashes or explosions, that’s not good. It all adds up to an Italian-made jungle slog that we really wanted to like, but the lack of lighting and  too-brief appearances of the fan favorites made that difficult…actually, impossible.

This same year, 1987, director Stelvio Massi again teamed up with Fred Williamson for the more entertaining Black Cobra. Perhaps he wanted to make amends for Hell’s Heroes and use Fred in a more workable context. The naming of the incidental characters Bronx and Trash will immediately remind genre fans of Mark Gregory and 1990: The Bronx Warriors (1982) and Escape from the Bronx (1983), where he, of course, played Trash. Is this something we were supposed to pick up on? Because if so, then the character name of Darkin does indeed seem more like a nod to the fact that only the most minimal lights were used and nothing is seeable during the night scenes – and they knew it. Stelvio Massi is also known for his spate of Poliziotteschi movies in the 70’s, so he knows how to make fast-paced action. Something must have gone awry in the jungle this time…a bungle, to paraphrase Jethro Tull.

In the end, Hell’s Heroes is dull and not indicative of the talents of those involved. There’s a reason it was included with the 4-movie set “Inglorious Bastards 2 Hell Heroes 4 Inglorious Film Collection”, the title of which we’ve chastised before for being almost incomprehensible, and not released as a standalone disc. It’s not worth that treatment, and only die-hard fans of this type of movie are encouraged to seek it out.

I agree, this could have been better if more was visible. The movie is also very oddly letterboxed on the DVD with the picture being at the top of the screen. I suspect it has been transferred from a Japanese VHS with someone putting a black box over the subtitles, thereby also cutting away a part of the image. The mastering problem with the really dark image might be a product of the same transfer or it might have been on the original VHS. On the other hand, it is a very realistic movie, because this is exactly what a gunfight at night in the forest looks like; everything is dark except for the occasional muzzle flashes. There is another similar DVD collection called Expendables 2: Zero Heroes, which has the original The Expendables (1988), Wild Team and both Cobra Mission movies.

Yes we noticed we noticed the letterboxing was misaligned. Your explanation for why that is makes a lot of sense. We'll look for that other collection and thanks for the great info as always.