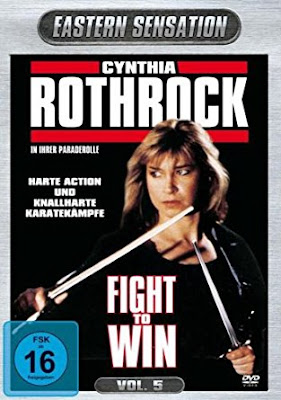 Ryan Kim (Chung) is an enthusiastic young Martial Artist that loves nothing more than training with his Sensei (Ochiai). One day after a tournament, the mysterious Armstrong (Norton) approaches them and offers Ryan the opportunity to fight Tankson (Superfoot). The reason for this is that Sensei has three ancient statues and the wealthy Armstrong wants them for his collection. When Tankson defeats Ryan, Sensei offers a “double or nothing” rematch, which the overconfident Armstrong can’t refuse.

When Sensei is hospitalized after a heart attack, a new trainer is brought in – a woman named Lauren (Rothrock). At first, the immature and perhaps sexist Ryan doesn’t want to be trained by her. But after experiencing her brilliant skill, not only does he fall in line, he also falls in love. The stage is set for the ultimate showdown…and there’s even a raid on Armstrong’s compound that features Ryan’s buddies Michael (Jeffreys), Jerry (Chapa), and Randy (“All-pro football star Ronnie Lott”). It’s time for Ryan and the gang to FIGHT TO WIN!

From George Chung (not to be confused with one of the producers here, the prolific George Cheung), the mastermind behind Hawkeye (1988) and Kindergarten “Ninja” (1994), and director/fan favorite Leo Fong, comes Fight to Win, another wacky, screwball blend of Martial Arts, comedy, and an indefinable element that can only be found in the magical productions of the 80’s. If you’ve seen either of the aforementioned Chung outings, here you get more of the same (thankfully) – a low budget, but plenty of energy and upbeat attitude, silly dialogue and situations, and highly-skilled Martial Arts. The dialogue isn’t recorded very well so undoubtedly some of Chuck Jeffreys’s bon mots are missing in the mix, but the sense of fun is infectious, and the whole movie is imbued with a – dare we say – feeling of childlike wonder and whimsy. 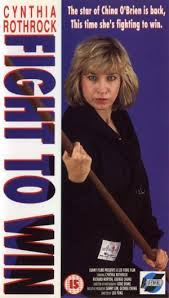 It’s really impossible to dislike Fight to Win, and we feel sorry for anyone that does, as they probably have no heart or soul. The cast is killer: We have the aforementioned auteur George Chung, who gives his all here, Chuck Jeffreys, the Eddie Murphy of low-budget DTV Martial Arts movies, doing his usual stellar job, Troy Donahue in a blink-or-you’ll-miss-him cameo, Bill “Superfoot” Wallace as Armstrong’s tough-guy fighter, David Heavener lookalike Juan Chapa, Martial Arts legends Hidy Ochiai and Master Hee Il Cho, All-pro football star Ronnie Lott, and of course the teaming of Comeuppance hall of fame all-stars Cynthia Rothrock and Richard Norton, who do interact and have some fight scenes together. With Leo Fong as director, this cocktail can’t possibly fail, and it doesn’t. Rothrock is as charming as ever and Norton plays the baddie with aplomb. It’s a joy to watch everyone’s Martial Arts skill on display.

While there’s plenty of extensive training which the presence of Rothrock as the trainer helps to make more enjoyable, and some casually-racist Middle-Aged Punks (classic MAP’s), truly the showstopper is when the movie essentially stops so George Chung can have a one-man music video where he combines Martial Arts with razzle-dazzle dance moves.

With this heady combination of Bruce Lee, Tae-Bo, Footloose, Flashdance, and Zumba, Chung – and thus the movie as a whole – truly shines. This dance element (which was foreshadowed earlier on during one of the tournament scenes) sets the movie apart and makes it stand out even more – and it was already a fairly odd duck to begin with. And we mean that in the best possible way, of course. Fight to Win is a delight from start to finish. Criminally, it never received a U.S. VHS release (and as of this writing has yet to receive a U.S. DVD or Blu-Ray release). The fact that just about everyone in America did NOT see this back in the day is painful to contemplate. Interestingly, it was released on video in Greece under the title “China O’Brian [sic] 3”, even though it came out three years before the other two sequels! At least they got to see it, however.

Well, there you have it. George Chung turns in another winner. They truly don’t make movies like this anymore, and in the self-serious modern era, Fight to Win just stands out that much more.

I agree. This was better than Leo Fong's previous movies. Either he improved as a director or the movie benefitted from having another actor in the protagonist role.
Have you seen Death Fighter with Matt Mullins, Don "The Dragon" Wilson and Cynthia Rothrock yet? It's quite good; a contemporary jungle slog. ;-)

Agreed, this was a lot of fun to watch. We definitely want to see Death Fighter. Happy to hear it's good.