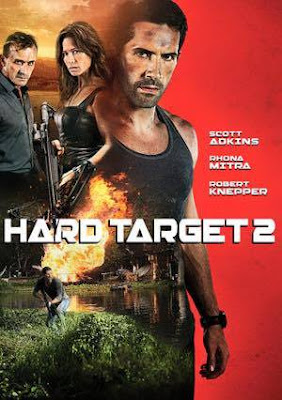 
Wes Baylor (Adkins) is on a career trajectory that could be the case for anyone: He was a Las Vegas-based MMA fighter, he accidentally kills his buddy in the ring during a fight, he feels bad, he starts drinking and hits the skids, he begins Punchfighting in Bangkok, and an unscrupulous baddie tricks him into hunting him for sport. Could happen to anybody. Of course, said baddie, Jonah Aldrich (Knepper) has a hunting party with him in the Burmese jungle that also enjoy hunting the greatest prey of all…MINK! Oh wait, no. MAN! These hunting compatriots include a gaggle of stereotypes such as the Weak Link, the Millennial Video Game Designer, the Tough Chick, A Spanish Bullfighter, an Australian Outback (?)-style hunter, and the dad trying to toughen up said Weak Link.

Aldrich has his second-in-command, Madden (Morrison) as the tough guy of the group. Aldrich is paying off the Burmese authorities with suitcases full of cash, but there’s also a cache of rubies at stake. When the initially down-and-out Baylor (whose MMA nickname was “The Jailor”, which is actually spelled correctly) finds an innocent country girl named Tha (Truong) in the jungle, he finally finds he has something to fight for, and he unleashes his power on the Aldrich group. Will Baylor be a HARD TARGET 2 Aldrich?

While Hard Target 2 is not a bad movie, it doesn’t live up to the potential that a Hard Target sequel starring the great Scott Adkins promises. It’s certainly better than previous Adkins vehicles such as El Gringo (2012), but even seeing this movie for the first time feels like watching a repeat. If we may compare it to a superior Adkins film, Green Street 3 (2013), that one was like admiring a brilliant piano player, while Hard Target 2 is like watching a player piano. It hits all the right notes on cue, but that’s about it.

It has absolutely beautiful Thai locations, and thankfully the production values are high, but exactly how many Most Dangerous Game/Surviving the Game movies need to be made at this point? Should we be happy that the DTV industry is still making these or not? It depends on your tolerance for a lack of a creative or original plot, or if you just really like the whole “hunting humans in the jungle” thing. There have to be fans out there of it…but how many to justify yet another one? 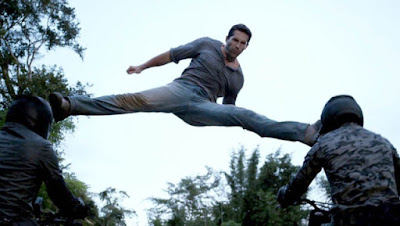 It all starts right away with a nice bang (complete with some funny yelling), and the whole outing has plenty of action. That being said, the 104-minute running time could have been chopped down a bit. The always-enjoyable Adkins has some great fighting moves on display, but we missed his natural British accent. How come the Burmese country girl had one but he wasn’t allowed to have one? (We think we may have detected a few instances where it slipped through, however).

There are several references to the earlier Hard Target film, from the use of slow motion, to the casting of Robert Knepper as the baddie, probably because he physically resembles Lance Henriksen. Not that Knepper isn’t great in his own right, but the resemblance does give this sequel a sort of continuity to the earlier film. 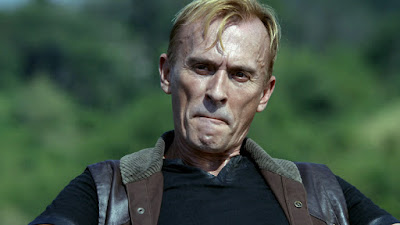 Director Reine’s filmography is pretty rife with sequels to other people’s movies (or his own), but he’s notable (?) for directing the Connecticut-shot Seagal vehicle Pistol Whipped (2008) – also starring Lance Henriksen. Fun facts aside, Hard Target 2 is another in a long line of movies of this sort that include everything from Death Ring (1992) to Soldiers of Fortune (2012), and countless other examples.

The action is there, Adkins is there, the production values are there – just a tad bit of originality would have gone a long way, because it’s not there. Linking this with the earlier Hard Target in viewers’ minds may have been shrewd, but another title might have been a better move. But that’s unlikely to have happened, because the sign on the door here is apparently, “no originality, no problem”.

Still, we should be happy this came out in the U.S. It seems like something that would be exclusively made for foreign markets. If you’re willing to forgive the almost impressive lack of originality here and just concentrate on the Adkins action, Hard Target 2 is certainly worth seeing.

I completely agree with everything you say about this one. Regarding the availability of action movies on disc, the US may still have a wider choice than Europe, e.g. recent movies with Mark Dacascos and Michael Jai White were not released here. Many US releases, however, are only on DVD while Blu-Rays are usually available here.

That's unfortunate you're not getting the new Mark and Michael releases. Hope they eventually come to you.