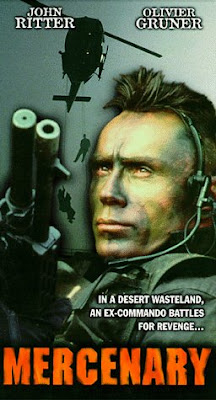 
Jonas Ambler (Ritter) is a multi-millionaire businessman with his face on the cover of Forbes magazine. When his beloved wife Joanna (Harris, of The Dogfighters fame) is killed in a terrorist attack, Ambler wants revenge. After discovering the baddies involved are headed by arch-baddie Phoenix (Kove), the corporate warrior yearns to be a real warrior when he reaches out to Hawk (Gruner) and McClean (Culp), expert mercenaries, in order to capture and kill Phoenix. At first they reject his offer of four million dollars, but they eventually relent and agree to take on the job. The only problem is, while Hawk and his crew are highly-trained badasses, Ambler is not, so they go on an extensive training regimen. All this in the presence of his head of security, Cochran (Lauter). Soon enough, Hawk and the gang are in the Middle East and fighting the bad guys. But Hawk is emotionless (or is he?) and Ambler is a bit of a goofball. But they’re going to have to learn to get along if they want to survive the most dangerous mission of their lives. Will they be successful?

Mercenary is a lot better than we thought it was going to be, having based our assumptions on having seen the second one first. Sequels are often not as good as the originals, and here is a classic case of that. There’s plenty of quality action, and it’s all very professionally done. If the movie had starred Van Damme instead of Gruner, this could have gone to the theater. That’s not to say that Gruner isn’t perfectly cast, however - as the emotionless warrior, with maybe a bit of humanity lurking underneath, Gruner is ideal as Hawk. Plus his hair seems to get higher in every scene. Halfway through the movie, he looks like Kid from Kid n’ Play.

It all kicks off with a bang in classic 90’s style, and the whole outing is perfect for video stores of that time. It even has Jack Tripper himself, John Ritter, getting in on the action. How often are you going to see that? Sure, he provides the comic relief for Hawk, but he also gets emotional and angry at times. And he’s never annoying like the characters in the sequel. Ritter gunning down Islamic terrorists. Who’d’ve thunk it? Plus, we liked the fact that the mercenaries were the good guys. 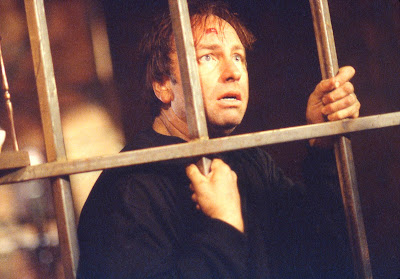 Cementing the fact that this is classic 90’s action, we have the time-honored barfight and the Prerequisite Torture of the heroes. There’s even some surprise Killfighting. Not to be confused with Punchfighting, at one point Hawk and Ambler find themselves in a dark, underground arena where men take to a pit and try to kill each other, but this is not Punchfighting. There is minimal, if any, punching, and the crowd surrounding them is not clutching cash in their hands. Plus they had knives and were dueling to the death. Leave it to us to define the subtle differences between Punchfighting and Killfighting. But it was all part of the rich array of action’s glory days.

While the movie was from ‘96, the plot - offering up millions of dollars to find a terrorist - recalls the hunt for bin Laden, and Robert Culp strongly resembles Mitt Romney. Coincidence? Well, yes. But to corral a killer cast like this is truly a once in a lifetime assemblage (look out for genre mainstay Nils Allen Stewart and an early appearance from Jaime Pressly). Director Nesher, known for Timebomb (1991) and The Taxman (1999), among others, puts in his version of a Men of War (1994)-style plot, and we say it’s successful. The only real problem with the movie is that it’s too long. It didn’t need to be 102 minutes, and if it was shorter we might be looking at an all-time classic. As it stands, Mercenary is a very good all-around action movie that is more than watchable and likable.

Featuring a cover of La Bamba by the band Popdefect, watching Mercenary will take you back to one of the last great years for DTV action. Just make sure you avoid the sequel.

This is a solid Gruner. I actually like both the Mercenary movies equally well.

This was a pretty decent Gruner. We didn't like the 2nd one too much. Haha. Too much bad comedy from Robert Townsend.