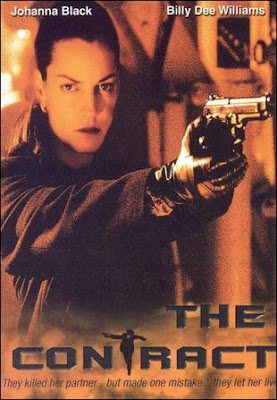 
Luc (Imbault) and Hannah (Black) are professional assassins on the mean streets of Toronto, Canada. They always execute their CONTRACT killings with efficiency, but they get more than they bargained for when they enter the world of Senator Harmon (Billy Dee). Described as a “hardliner” by his critics, they don’t know how right they are – Harmon seemingly has no qualms about eliminating potential threats to his rise to power…permanently. When a conspiracy unravels that puts Hannah and her boyfriend James (Olver) in jeopardy, they go on the run and link up with their associate Ozzy (Richardson). After many trials and tribulations, the inevitable final confrontation comes between Hannah and Harmon. But will the ultimate CONTRACT be fulfilled?

Unfortunately, The Contract was a disappointment. There are many factors at work here that ultimately sink the movie, any one of which might not do so on its own, but here it’s a case of death by a thousand cuts. The whole thing is very Canadian, but it’s supposed to be set in the U.S., which is always a mistake. Just embrace your Canadian heritage and things always go better in the end. It was the late 90’s, which was a death time for DTV productions like this. It has a downmarket, low-budget feel. It’s a Tarantino Slog, as we call them, and the world just didn’t need another one of those, especially one of this puny stature that couldn’t even compete with the bigger and more well-known T-Slogs of the day.


Most of the action consists of “assassination shootings”, and the few fight scenes (such as the kitchen fight) have this silly slo-mo effect which doesn’t do anyone any favors. The climax makes very little sense, and that’s after a movie which doesn’t have powerful forward drive or verve, not to mention a well-thought-out or well-written plot that would involve viewers. There’s also a lot of soundalike music on the soundtrack, with songs or musical cues that by turns sound like Pearl Jam, Pink Floyd, The Mighty Mighty Bosstones, The Dave Matthews Band, or Paula Cole/Meredith Brooks/Shawn Colvin or any number of Lilith Fair-style female singers at that time.


On the bright side, Billy Dee Williams is extremely charming, as ever, and he has a lot of screen presence and magnetism. The movie is hanging on by a thread as it is, without BDW it would be nothing. He did seem out of place here, however. Johanna Black brought a certain Nancy Kerriganesque charm to the proceedings. She did her best against impossible odds. A point of interest came up when Ozzy started talking about his record collection, saying that he has over 2,000 vinyl albums. After we perked up upon hearing this, the movie then went back down to its default position of being lame.

The Contract reminded us of a less-professional Killing Time (1998), but without the actual Portishead music. Instead it featured artists we’ve personally never heard of such as Juke Joint, Adam’s Curse, Vivian George, Shikasta, Heartbreak Hill, and Babelfish. They probably couldn’t afford the original hits by the original artists, we understand that. One of the songs does feature the lyrics “growing up in Canada makes you strong”, evidence of which cannot be found in this film. Of course it all ends in a Final Factory Fight, as so many movies do, but we as viewers simply don’t care about what we’ve just seen. To be fair though, this movie is significantly better than Conspiracy of Fear (1995). So, it’s good to keep perspective on things.

With better writing, tighter editing, More original dialogue, more focused direction, better music, and giving our heroes more goons to fight, The Contract would have been vastly better. Only the presence of Billy Dee Williams keeps things afloat…barely. The woman in the artwork doesn’t even appear to be Johanna Black. Sadly, we cannot recommend The Contract, except for Billy Dee Williams completists.