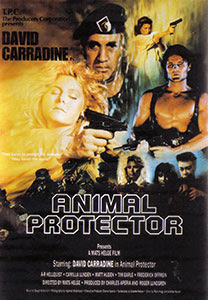 
Somewhere off the coast of Sweden is a secret American military base run by the sinister Col. Whitlock (Carradine). Using underlings such as Carter (Offrein) and Johnson (Earle), among others, Whitlock uses his iron-fist tactics to ensure the base continues its dark experiments. Sadly, they are doing testing on all sorts of animals to create biological weapons. When a trio of female animal rights activists called the ANIMAL PROTECTORs, led by Carrie (Lunden), but including Helen (Ostrom) and Tina (Anderson), sneak their way onto the base in order to free the helpless animals – as do a meatheaded CIA agent named John Santino (Hellquist) and another good guy named Lomax (Hudden) – all hell is going to break loose on the island.

Animal Protector is further proof that the work of Mats Helge comprised Sweden’s greatest cinematic exports of the 1980’s. We’re constantly championing him because he continues to deliver the goods for film after film. Frankly, we like his style. Even the choice of title is unorthodox: of all things, Animal Protector, in the singular, even when there’s a group of so-called “Animal Protectors”, among a myriad of other characters. Why? Perhaps it’s to pique our interest. And it totally worked, just like everything else in this remarkable film. 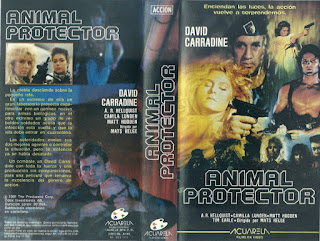 This time around, none other than David Carradine joins the fray, and a team up between him and Offrein (who we’ve called “Kenny Rogers” in the past because he looks exactly like Kenny Rogers) is as magical as you’d think it might be. When not bewildered by a blur of different accents during the dialogue scenes, Animal Protector provides near non-stop shooting, blow- ups, or some type of action. The dance club fight/shootout was a particular highlight, but there are many. What puts that one a cut above the rest are Lomax’s hypnotic pants. Which sounds like a movie title in its own right.


One of the action scenes late in the movie is re-used in a solarized, stylized fashion for the opening credits sequence, ensuring something is blowing up or being shot at all times. There’s even a bit of Punchfighting in the beginning to get us all hooked in to the proceedings. Yes, it does have an overall feeling of being totally ridiculous, but it also has a ton of heart. While obviously shot with the international market in mind, it also retains a special “Made in Sweden” feeling, with a lot of handcrafted charm. That in combination with the non-stop action produces a gem.

Nowhere is that better exemplified than in the character of Santino, portrayed by Swedish National Treasure A.R. Hellquist. As if all the wild n’ wacky goings-on weren’t enough, along comes an oiled-up meathead to just put things over the top. Just like in Helge’s Russian Terminator (1989) (hey, if a formula works, it works). Some say he slightly resembles Kurt Russell. He takes his shirt off and keeps it off for no reason that we can discern. Even in the cold Swedish night when you can see everyone’s breath, Hellquist’s shirt is nowhere to be seen. Fantastic.

Featuring music by Dough Anderzon (surely his name is Doug Anderson and this is a typo…come on, Dough? But it’s all part of the fun) and featuring an incredibly catchy tune by Dag Unenge and Peter Ahs called Face To Face, Animal Protector is a solid winner all around from the inimitable Helge.

Cracker of a film, I reviewed this a while back: http://www.explosiveaction.com/2017/02/ultimate-protector-aka-animal-protector.html

This and Ninja Mission are probably the best Swedish action movies ever made, while Born American represented Finland. I don’t think any action movies were ever made in Norway and Denmark, so the Scandinavian contribution to action movie history is meagre. Well, Renny Harlin went from Finland to Hollywood, and made Die Hard 2 and Cliffhanger, so there’s that.

Some background info:
Frederick Offrein was a Dutch entrepreneur who migrated to Sweden. He worked as a bouncer in a famous night club, so he met loads of celebs. He was the guide for Stallone when he visited Stockholm in the mid-80s. He even has a website to document his 80s exploits: offrein.com

Mats Helge started out making lingonberry westerns, i.e. westerns filmed in Sweden, before his action movie heyday. His movies were considered trash in Sweden in the 80s, and Ninja Mission was banned. He mostly filmed the movies in the countryside where he lived. In the early 90s, he was wanted by the Swedish IRS, went underground, and still remains a recluse. During the last few years, his reputation has been rehabiltated, since many of the people who worked on his movies became famous actors, producers and directors in Sweden. There was even an exhibition with memorabilia from his movies, but Helge was not interested in attending.

Can't agree more, we loved it too. Got to love Mats Helge. Also just put a link to your review!